Reader: Put Your Dog on a Leash, Period. 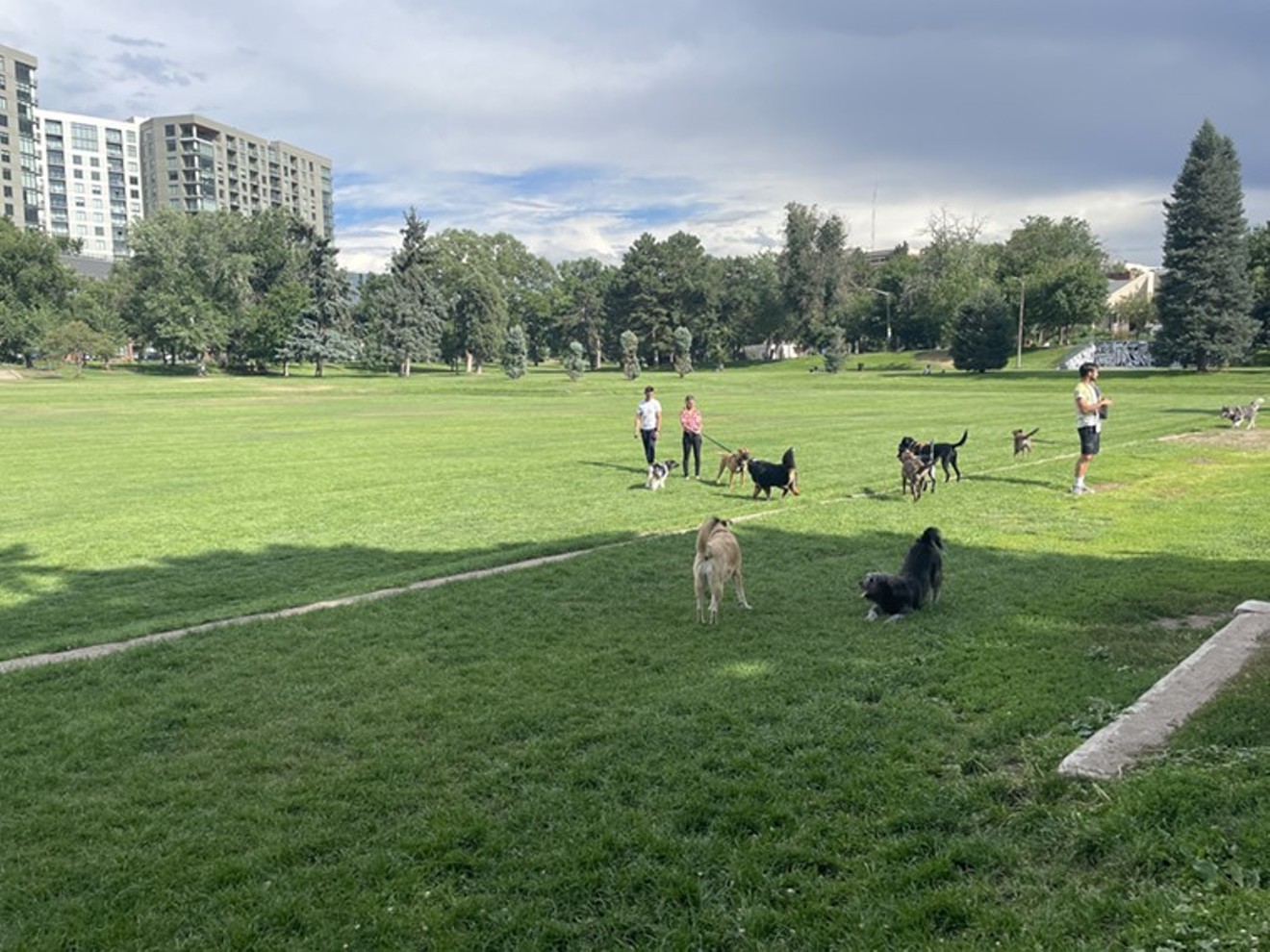 An illegal "dog party" in Sunken Gardens Park. Catie Cheshire
Head to Sunken Gardens Park any weekday evening and you’re likely to see the wagging tails and hear the excited barks of dogs playing together, bounding up and down the west side of the park along Elati Street. But Denver Parks and Recreation doesn't like to see this park going to the dogs when the city already has a dozen official off-leash parks, and it's been cracking down on these "dog parties."

“One hundred percent, that's accurate,” says Jodie Marozas, the downtown operations park ranger supervisor with Parks and Rec, who notes that the department is hitting up off-leash dog gatherings all over the city.

And judging from their comments on the Westword Facebook post of the canine crackdown, most readers agree. Says Russell:

I’ve been a lifelong dog owner...but I was attacked by a dog when I was younger and still get triggered when a dog runs at me. A person’s dog’s freedom does not outweigh the safety or respect of others in public spaces.

The article brings up some great points about public spaces and off-leash dogs. If people just can’t wrap their heads around that, then they shouldn’t be dog owners. And if I feel threatened if a dog runs at me because of an irresponsible owner, I will not hesitate to kick it or do whatever to protect myself no matter how well-behaved they think their animal is. ... And don’t get me started with people letting their dogs off-leash on a hiking trail.

When I see a dog off-leash chasing wildlife in my local park, I tell the owner it is illegal to have a dog running at large and to be harrassing wildlife. I then take their picture. You cannot believe the arrogant attitude these people have.

Also a dog owner, and it really bothers me when people let their dogs go off-leash in places not designated for that. It’s against the law, it can be dangerous not only for other people and wildlife but also for the dog itself (dogs are not people: the smartest, most-trained dog can have an off-day and run off and get hit by a car), and it also is extremely frustrating for me as a person with an anxious dog that gets scared when off-leash dogs come charging at him. Put your dog on a leash, period.


I moved to Denver from the countryside two years ago, and the first thing I searched was off-leash dog parks…. Some were small, but some were awesome and we now return almost daily. Try Cherry Creek dog park…get a park pass that you can then use at all state parks for free.

My dogs are better off-leash and voice-controlled (working cattle dogs) but it still bothers me when I’m walking them on-leash and an off-leash dog comes charging at me…my cattle dog is very protective of me and her li'l pup.

There should be an "off-leash license." You buy insurance in case your dog causes problems, prove vaccination and you're still criminally and civilly responsible for your dog's actions. When laws are routinely ignored without bad outcomes, legislators should really consider the wisdom of those laws.

What do you think about Denver's dog parks? Owners letting their dogs go off-leash in other parks? Post a comment or share your thoughts at [email protected]
KEEP WESTWORD FREE... Since we started Westword, it has been defined as the free, independent voice of Denver, and we'd like to keep it that way. With local media under siege, it's more important than ever for us to rally support behind funding our local journalism. You can help by participating in our "I Support" program, allowing us to keep offering readers access to our incisive coverage of local news, food and culture with no paywalls.
Make a one-time donation today for as little as $1.