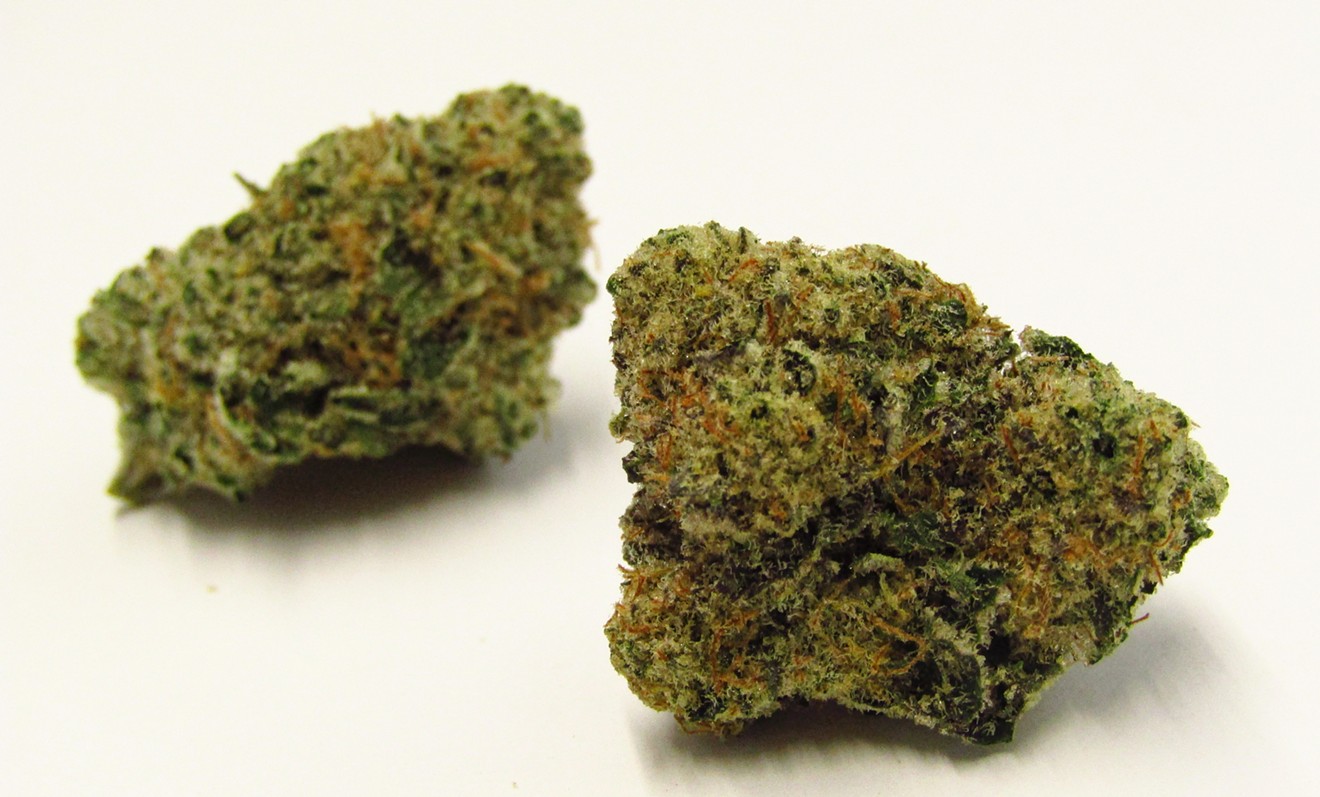 Cake Mix is a recipe for floating through the day. Herbert Fuego
We've almost hit the end of the line for "Cake" cannabis strains, thank God, and one of the best was saved for last. Growers have been able to mimic aromatic slivers of the sweet, doughy fumes wafting out of Betty Crocker bags for a decade, but never named a strain "Cake Mix" until the concept was well beyond overkill. Several popular Colorado cannabis brands have bought in now, however, and it's time to see if the strain lives up to the moniker.

At minimum, Cake Mix is a fourth-generation Cookies strain. The strain's parents, London Pound Cake and Wedding Cake, were both children or grandchildren of Girl Scout Cookies, so Cake Mix fits the modern archetype of dense, sugar-coated buds and occasional bright colors. I had lukewarm expectations for Cake Mix's flavor and effects, as Pound Cake has an earthier flavor profile than advertised and Wedding Cake is a stud for potency and trichome production among breeders, and was skeptical about the high before my first try.

Friends said Cake Mix felt like a brain blender with too much energy, while online reports included early bedtimes owing to Cake Mix's potency, so I did what any experienced pothead does after buying something with mixed reviews: I created a safe space and hoped for the best. Food was in the microwave and the movie was on pause during my first hit, yet I attended to neither for the next 45 minutes. Sitting down was unfeasible for over an hour.

The high, an energetic and intensified blur, wasn't my favorite, providing few outlets other than mindless cleaning and exercise. Although I can't deny that Cake Mix's aroma — earthy and Kush-heavy, but with a noticeable layer of lemon syrup and vanilla — had batter-like qualities, there are hundreds of better-tasting strains to smoke during the daytime, making me wonder if Cake Mix is simply a high yielder coveted by commercial growers. It wouldn't be the first or last in the cannabis world, but at least my kitchen is spotless.

Looks: Speckled with violet spots, bright-orange pistils and a heavy coat of trichomes, Cake Mix's wintergreen buds have a sugary appeal. The bud structure — tall, dense and segmented — is uncommon but not that rare.

Smell: Tangy, sweet and doughy off the top, Cake Mix fools my nose into focusing on the vanilla and lemon-bar aspects of the aroma before realizing that skunky fumes are filling the room around me. Those dank qualities end up taking over the smell, which has a surprising hint of pepper on the end.

Flavor: Cake Mix's flavor is more sour and spicy than I'd hoped, but the lemon taste does have a sweet side and floral back end to provide a little balance.

Effects: Cake Mix's high reminds me of an old-school "sativa" high before we knew the term was mostly bullshit. My head is in the clouds for hours, my tongue is dry no matter how much water I drink, and the high promptly drops from apex to grave pit.

Cookies, Cherry, Willie's Reserve and Loudbird all have versions of Cake Mix in dispensaries right now, while Ascend Cannabis Co., Harmony Extracts and Olio extract the strain, as well. As for flower, Cherry's take is my preferred of the bunch, but the red-eyed high might last hours longer than you planned for.