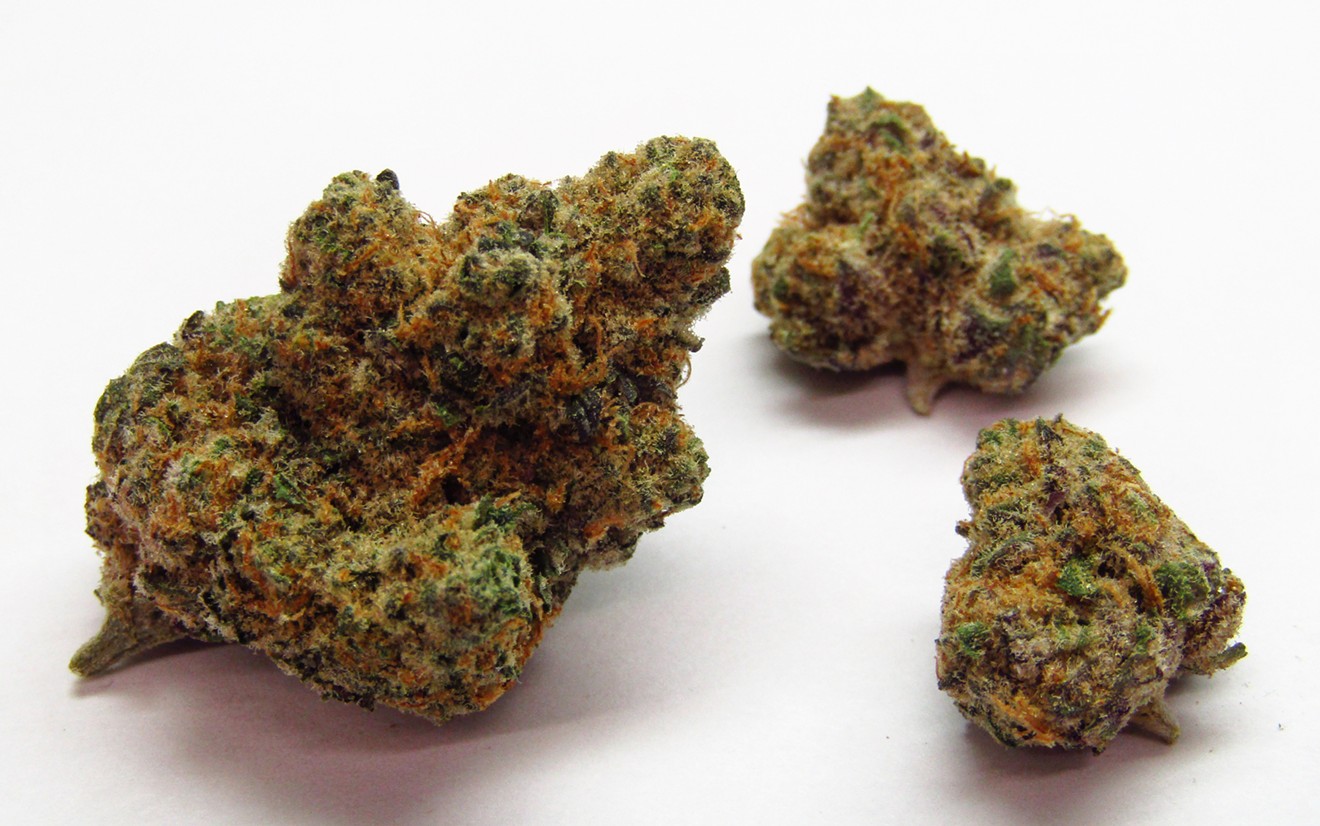 Unless you want to spend the day inside, keep these Pancakes on the shelf at breakfast. Herbert Fuego
The debate is older than our grandparents: Pancakes or waffles? (I never understood why French toast was excluded, but either/ors usually max out at two options.) While I crave both equally, a crispy Belgian waffle's ability to soak up regret on a Sunday morning — and perfectly nestle a fried chicken breast  — always wins me over in the end. Trader Joe's pancake bread makes the choice difficult, though, and after seeing that Cookies had joined the chat with a strain called Pancakes, I wondered if the final equalizer had emerged.

Another popular child in the long line of Girl Scout Cookies, Pancakes was born out of a joint project of the Cookies team and Seed Junky Genetics, a breeder already known for creating trendy Girl Scout Cookies offspring like Animal Cookies and Wedding Cake. The project crossed Kush Mints and London Pound Cake phenotypes, pulling out more buttery, doughy aromas and less citrus than Poundcake.

I noticed sweeter notes of berries and sherbet than advertised during my first few Pancakes sessions, although a buttery, flour-like aroma and sprinkles of nutmeg hung over the pungent Kush smell dominating the back end. Three days later, the smell (or maybe just my nose) had evolved, and the Bisquick influence was stronger.

It's hard to keep up with all of the Cookies creations hitting Colorado right now, but some of the strains are respected enough to already have been duplicated by other cultivations, including Gary Payton and Cheetah Piss, and so Pancakes has been imitated, too. If growers like Snaxland and 14er want to take those genetics out for a test drive, then something must be good about them. However, I found the flavor of Pancakes to be the most enjoyable aspect of the strain, with a high that pulls me down much more than its breakfast flavor implies. Unless you want Saturday morning cartoons to last all day, hold on to Pancakes for the evening.

Looks: Dark, purple fan leaves and striking orange pistils ornament the dense lime-green buds like a cannabis Christmas tree, with a heavy flocking of trichomes adding to the festive look.

Smell: Renowned for a buttery, doughy aroma similar to that of pancake batter, Pancakes has more of a berry sweetness than I expected, although the pancake characteristics did come later. Give the buds a few pinches if you must, because the heavy Kush notes are hard to crack through.

Flavor: It's difficult to notice the intricacies of Pancakes in the smoke, but pinner joints and a vaporizer highlighted some of those sweet breakfast flavors. That fruitiness, reminiscent of blueberries, tastes richer than it smells, and the flavor is similar to that of Girl Scout Cookies.

Effects: Pancakes relaxes my body, yet it's the head high that really slows me down. Stress is eliminated, but so are concentration and any sense of urgency. The lack of mental direction left me listless without pre-chosen entertainment. Save it for dessert or self-medication, because Pancakes' strength is no joke.

Commercial grower's take: "I kind of roll my eyes whenever the latest Cookies crowd rolls in, but when you see other respected growers take a shot at these strains, you get interested. Pancakes was a really good one, but I didn't see much of a difference between it and the others. Sweet and kind of cake-like, and heavy. You have to give it to Cookies, though: They keep cranking them out, and shoppers are fans of it."