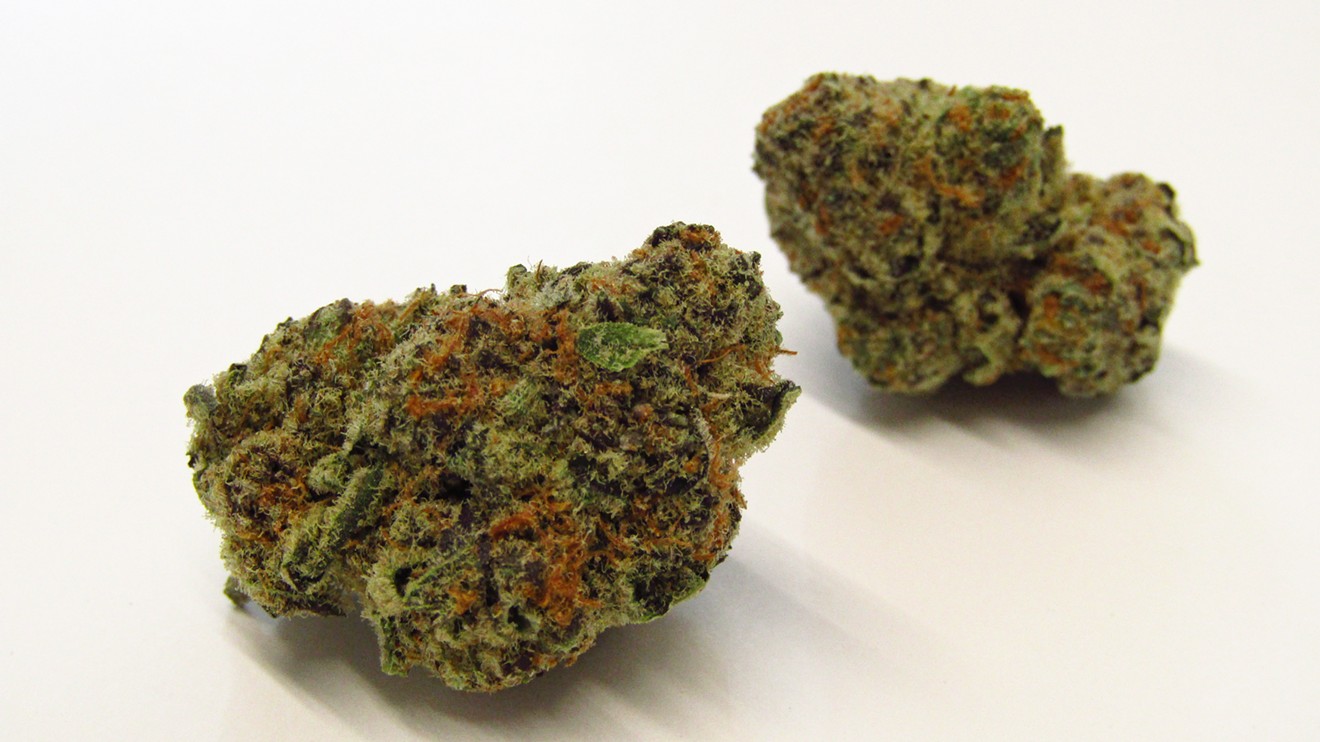 Sugar Cane moves quickly, but won’t provide a sustained daytime high. Herbert Fuego
Everyone thinks a double shot of espresso is liquid cocaine, but it actually has less caffeine than a cup of drip coffee. So do as the Cubans do, and add a few fat tablespoons of sugar to that espresso. You'll be shot to the sky after a sip of the delicious cafecito, which uses sugar as an early entry point to hyperactivity. After three hours of operating at a speed you never knew possible, though, you have two choices: have another cup, or crash.

There are plenty of cannabis strains that carry the same hummingbird effect, in which each hit has diminishing returns and ultimately ends with bad breath, crumbling concentration and a tired, weak body. It's the caffeine, sure, but the sugar is what puts you over the edge. Never trust sugar — or Sugar Cane.

A cross of Platinum and Slurricane, Sugar Cane looks like it was poured right out of a soft-serve machine. It's the type of eye magnet that makes you forget about White Widow's reign as everyone's favorite trichome-laden weed nuggets and buy into the new wave of weed. Be wary as you're drawn in, however, because Sugar Cane comes from a yin-yang background, and often leaves users with saggy eyes and bewilderment.

Slurricane, a mix of Do-Si-Dos and Purple Punch, brings me a sense of relaxed focus, while Platinum is a heavy combination of Afghani and OG Kush. That all sounds like a recipe for a chill night inside, but Sugar Cane has more of a sugar high, leaving little to be accomplished.

Remember when you were given powdered Kool-Aid for the first time, so you mixed ten heapfuls of it with a few ounces of water to drink the sugariest concoction ever made? Sugar Cane's high is what you experienced afterward: a short blip of extreme energy, little focus and a hard crash after descending through the clouds. Smoke it in the evening, though, and Sugar Cane can be a sweet primer for bedtime after getting through the initial turbulence.

Looks: Expect a lot of trichomes — so many that you might think there's something wrong. Sugar Cane's emerald-green buds look almost blue, thanks to that thick wall of trichomes, which make each calyx look like Incredible Hulk-inspired dollops of frozen yogurt.

Smell: Sugar Cane delivers on a reputation of sugary and grape aromas, but there's a surprise hint of chocolate or caramel in there, and those grape notes occasionally lean more toward blueberries. Either way, it's dessert for the nostrils.

Flavor: Chocolate and coffee flavors are much stronger in the smoke than the smell implied. Subtle notes of sweet grapes make a brief appearance before a resinous aftertaste takes hold, which is common for trichome-heavy strains.

Effects: Although the euphoric uplift is noticeable, the energy is difficult to contain and fades quickly. That works well for an evening session when you know what to expect, but most users end up smoking Sugar Cane in the day to keep up their energy. No matter how much you toke, though, it always ends with a cloudy brain and sleepy eyes.

Antero Sciences, Humboldt Farms, Iion and Meraki have all recently grown Sugar Cane for Colorado dispensaries, and we've seen extracted versions from Denver Dab Co., Leiffa and Soiku Bano. Antero and Iion have produced solid takes on the strain, in both appearance and high, but Soiku Bano's rosin is the best representation of Sugar Cane's candy-like flavor and brain-melting effects.