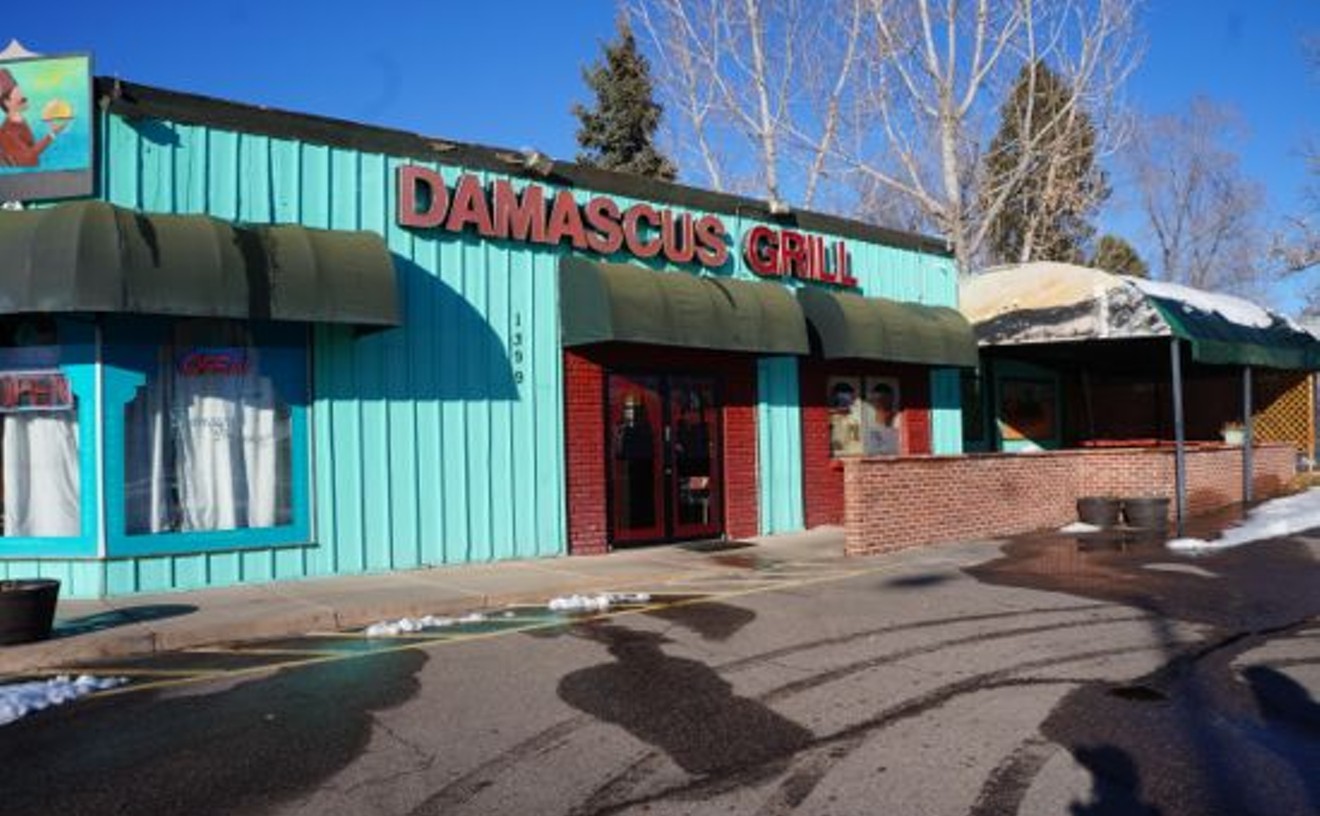 Although Damascus Grill has been in its Littleton location for a decade, the depth of its menu has not changed in that time. Too many Middle Eastern restaurants are content to serve a greatest-hits menu of hummus, falafel and kabobs. But this institution pushes past popularity to reveal a deeper, more authentic roster, with dishes including okra stew with lamb, tomato and pomegranate sauce; lamb baked with tomatoes, dried lemon and seven spices; and vegetarian offerings such as mujadara (cracked wheat with lentils) and hummus mutabbal with whole, not puréed, chickpeas. Breads are made in-house, and you can branch out from pita with the mana-ish, a cheeseless Mediterranean pizza topped with sesame seeds and spices. Don't miss the baba ghanouj, a smoky roasted-eggplant dip with walnuts and pomegranate sauce mixed in with the standard sesame sauce, garlic and lemon — it deserves a best in show.

Longtime favorite Tacos Jalisco serves pure Colorado Mexican, with a little Tex-Mex, a little norteño, some influences from Michoacán and a lot of big burritos. But our favorite order here is the nachos. The kitchen takes a bed of freshly fried corn chips and tops it with hefty portions of typical nacho accoutrements: refried beans, orange cheddar, pico de gallo, guacamole and plenty of pickled jalapeños. But what makes this platter a standout is the unusually high quality of said accoutrements. Add some meat and a side of the restaurant's thick pork green chile, which smacks the dish with heat, and you've got the most macho nachos in the city. 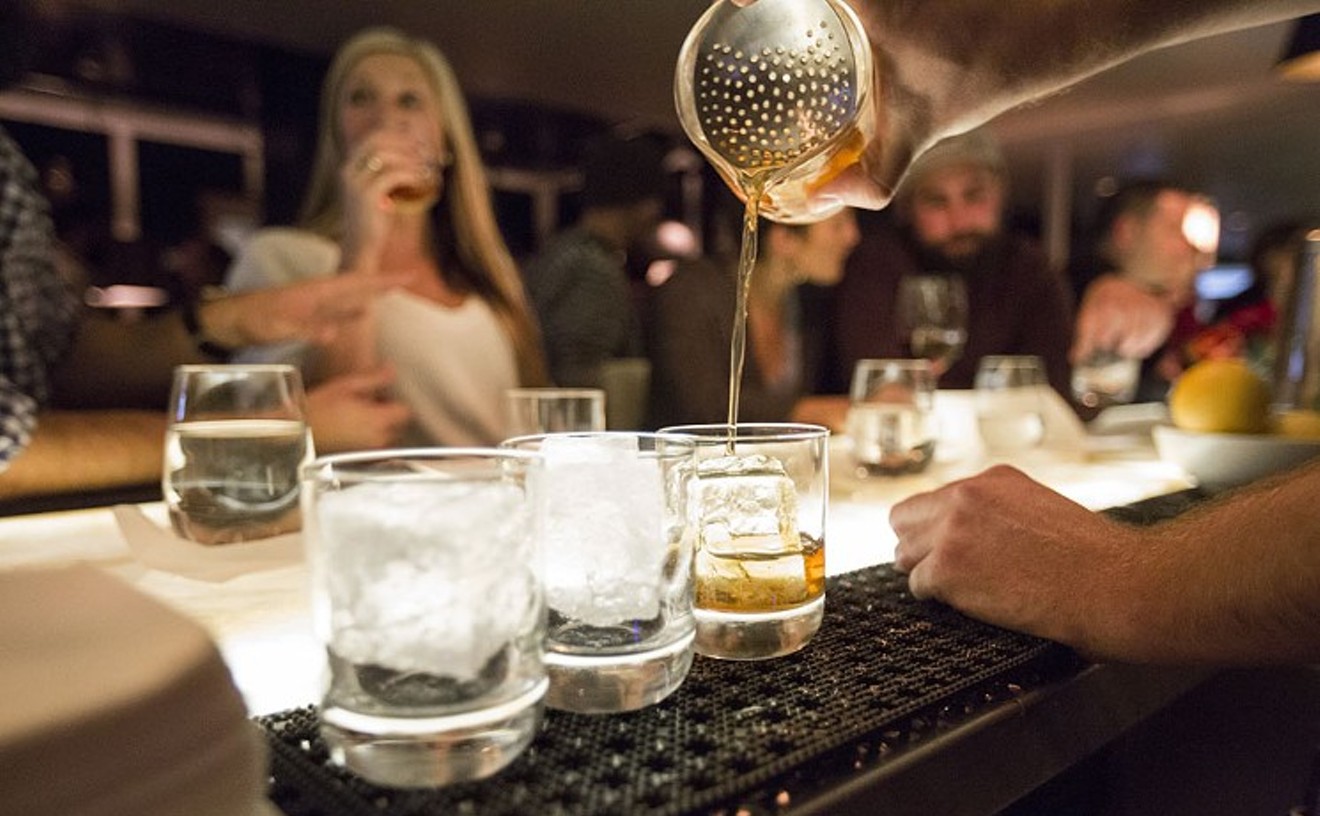 There are plenty of high-end cocktail caves tucked into Denver's trendiest 'hoods, but Ste. Ellie, an intriguing fifty-seat boutique and small-plates retreat in the underbelly of Colt & Gray, rises above the rest. Although the black-and-white color palette, moody lighting, modular chairs and crescent-shaped booths are ambience-rich and obligingly swank, owner Nelson Perkins and head barman Kevin Burke have smartly assembled a behind-the-bar cast that harbors none of the snoot that too often plagues cocktail bars whose aesthetics are 100-proof highbrow. Fifteen cocktails — a fair split between classic and current, all impeccably accomplished — are augmented by a "based-on-your-preferences" bartender's choice, potent punch for a crowd, and a well-curated selection of wines, champagne and beer. There's no shortage of food cred here, either: Try the clams and octopus with viande 'nduja, an Italian pork sausage, or the duck-confit poutine. 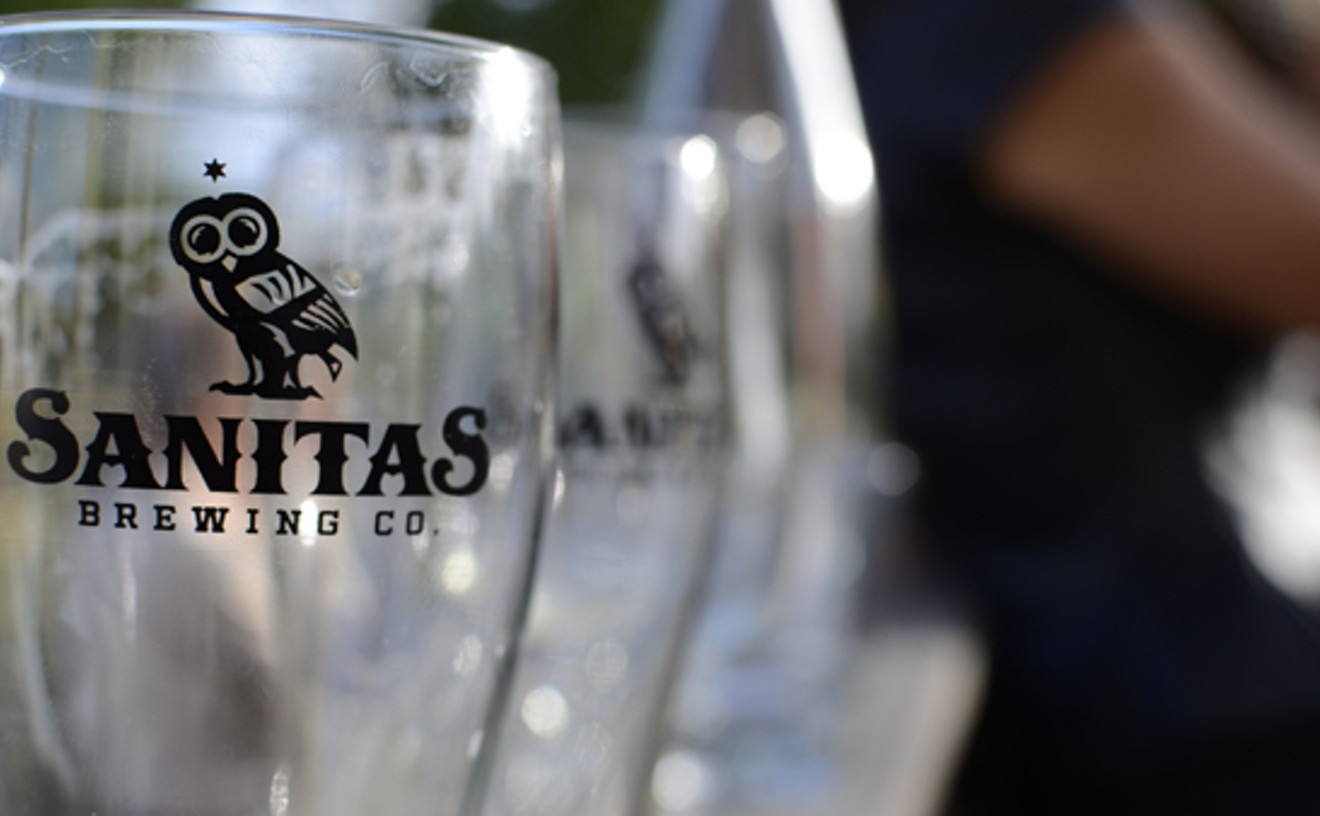 Sanitas Brewing opened last summer in a Boulder business park. But behind that nondescript exterior lies a cool, rustic interior that opens onto one of the most welcoming backyard-style patios in all of brewerydom. Beer drinkers can sit at benches and enjoy a view of the Foothills (and the brewery's namesake, Mount Sanitas) on a gorgeous Colorado day or play a few rousing games of bocce ball or cornhole on a court that overlooks a greenway and train tracks. And when that thirst hits — and it will — they can order a beer through the window of the indoor-outdoor bar. Perfect.

Yes, Epic Brewing got its start in Utah, but when the owners decided to open a new production facility outside of that state (in order to avoid the frustrating Utah liquor laws), they wisely chose Colorado, investing a couple million dollars into their soaring new brewery and tap room in River North. And they did it right, loading the huge space with a long bar, enormous windows, community tables, a view of the brewing process, stunning decor, a fireplace, and dozens of different beers on tap. The brewery, which has long hours and frequent food-truck visits, has quickly become an anchor in a brewery-filled neighborhood. 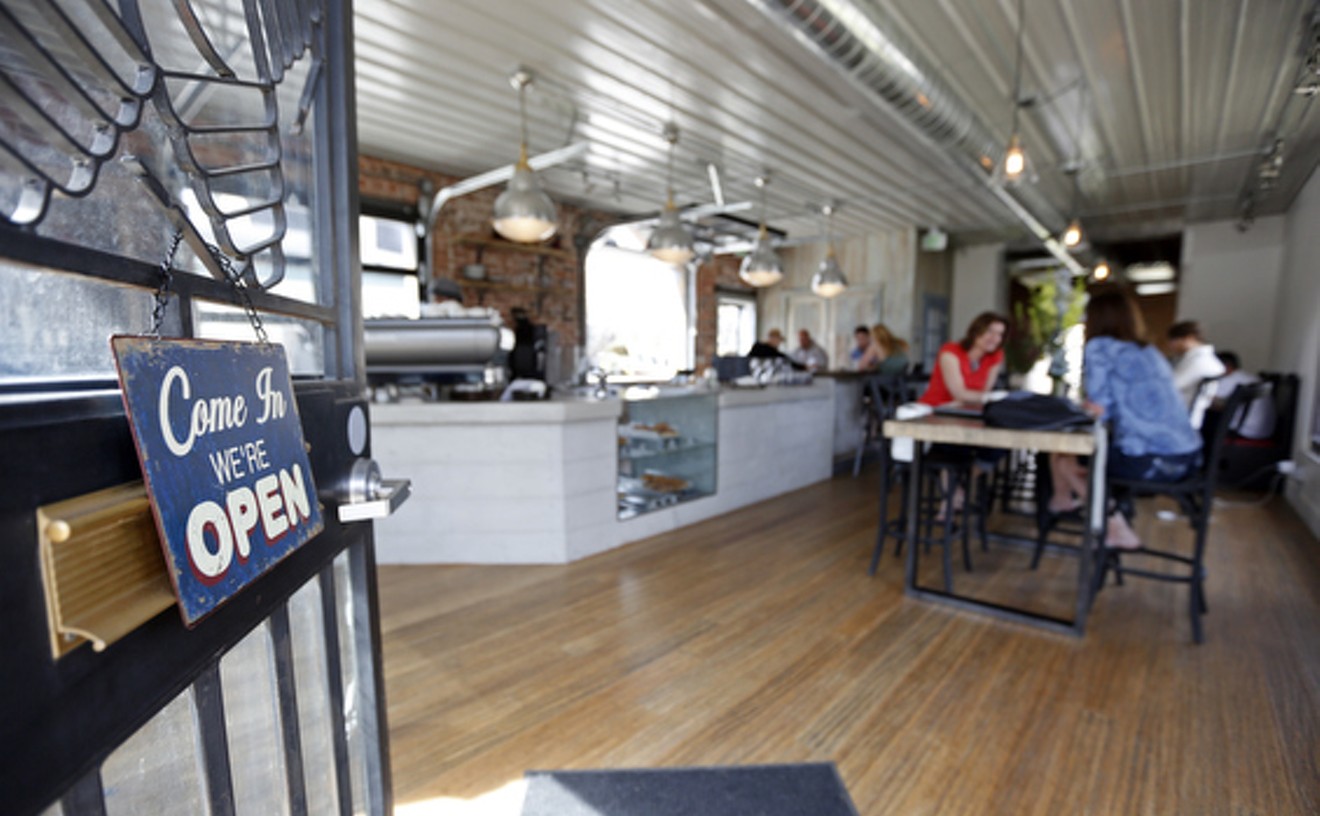 Remember when people used to plunk down in tattered couches and armchairs, java in hand, to read the paper or chat the morning away? That's so yesterday. With its sleek community table, vases of lilies and black-and-white decor that could fill a page from a design catalogue, Steam Espresso Bar epitomizes the coffeehouse of today. Whether you want a macchiato with foam in the shape of a heart or a lab-like pour-over with ethically sourced beans, coffee here is meant to be savored, not mindlessly sipped. During the week, this is a quiet place to talk business or catch up on a project; unlike some coffee shops, Steam still offers wi-fi. On weekends, you'll find people chatting, sharing macarons and standing in line (coffee this good doesn't come fast). What they're not doing, however, is chasing kids: This environment is decidedly too chic for that. 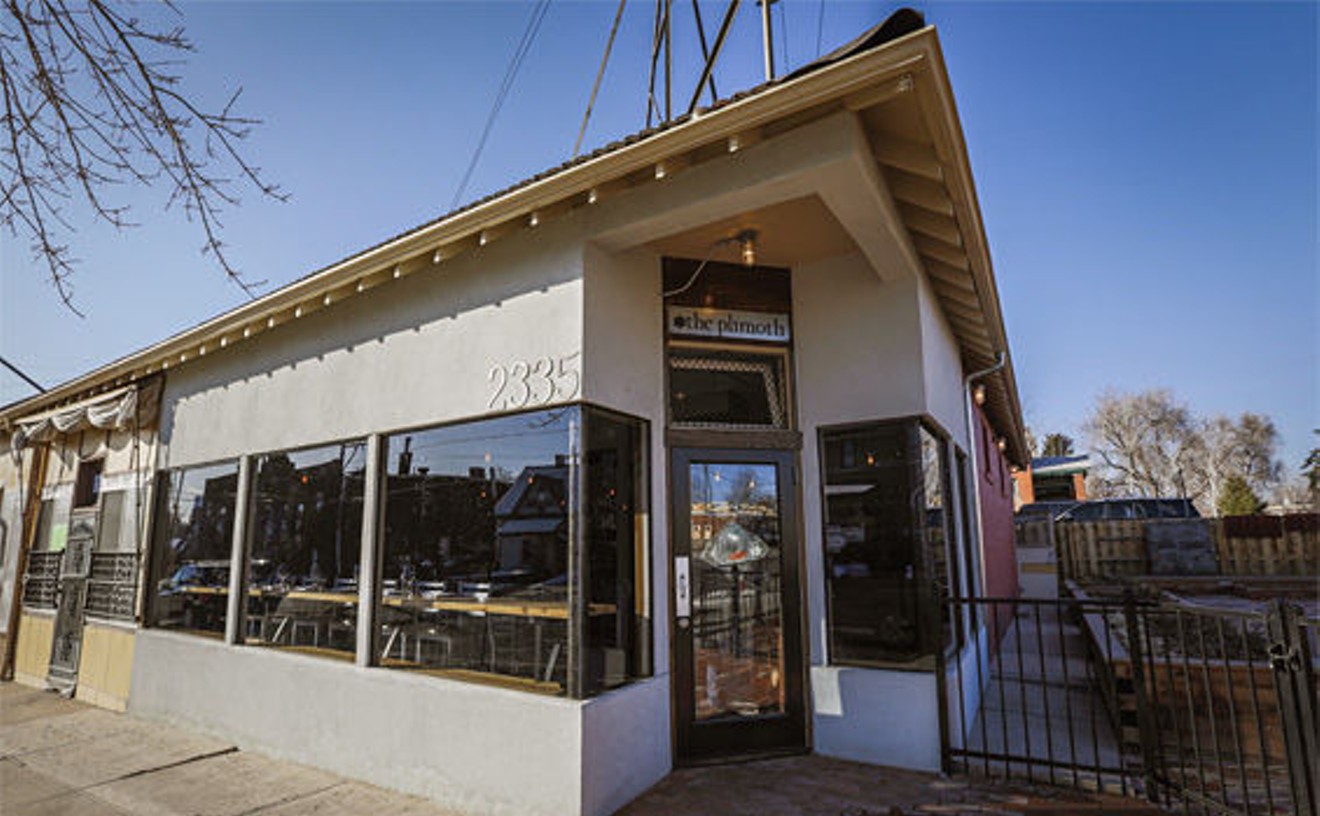 Most chefs, at least the sensible ones, don't open restaurants on dozing neighborhood streets where there's minimal traffic — of both the car and foot variety. But Peter Ryan, chef-owner of the Plimoth, has never been a conformist. He filled the unassuming, dimly lit space with reclaimed wooden tables and unobtrusive green-and-black Parisian wallpaper, which provides a casually elegant backdrop for the remarkably talented kitchen crew. Many of them, Ryan included, did time in the galley of Z Cuisine, and they deliver honest European dishes with a thick French accent to smitten diners who swoon at every spoonful of winter green bisque, bite of braised lamb shank, smear of pâté and forkful of gloriously good chicken. The Plimoth has all the makings of a landmark, a place that treats diners from all over Denver to the warmth and charm of a true neighborhood restaurant.

In a year that saw hundreds of openings, Denver's restaurant scene at times felt like short-track speed skating. But even with so many strong contenders, only one could take home the gold, and Lower48 Kitchen crossed the line first in the areas that matter most: service, creativity, plating, decor and, of course, food that you can't stop thinking about. Launched by a team of Frasca Food and Wine alums, with Mario Nocifera ensuring a gracious night on the town and Alex Figura acting as kitchen wizard-in-chief, Lower48 has turned a forgotten corner of the Ballpark neighborhood into a dining destination. Nowhere does Figura's creativity shine more than in the small bites, listed under the heading of "each": perhaps a melted Gruyère crisp slicked with sunflower-seed butter, feta and greens; a stack of dried celery root and house-smoked cheese; or a beignet filled with whipped tarragon. These tongue-ticklers are best combined en masse as an appetizer, then rounded out with one or two artistic small plates, such as charred octopus with lamb bacon or a stack of mushroom crepes. While the space is large enough to accommodate groups, with a private dining area behind a rolling door fashioned from a shipping container and a separate lounge called Service Bar, it's just as fun to come with a friend and sit at the chef's counter to watch the magic unfold.

Even before Coors Field opened in 1995, what would become the Ballpark neighborhood — and was then known as NoDough — had a lot of promise. Over the past year, that promise was finally realized, with all those turn-of-the-last-century warehouses now filled to bursting with residences and offices, and the Victorian storefronts housing excellent restaurants and innovative businesses. And the last few months have seen new buildings opening, too, housing cutting-edge enterprises and eateries — including Denver's Best New Restaurant. As a restaurant neighborhood, Ballpark hits it out of the park.

Acorn, the second restaurant opened by Bryan Dayton and Steve Redzikowski, had a lot to live up to, considering it sprang from the mighty Oak at Fourteenth, their nationally recognized flagship in Boulder. And it wasted no time in doing so, appealing not just to Oak regulars who made the drive down U.S. 36, but also crowds of stylish American-food seekers flocking to the Source, which opened last summer on Brighton Boulevard. With just enough overlap between menus that the family line is never in doubt — recognize that kale salad, those fried pickles and braised meatballs? — Acorn has developed its own identity, focusing more on cocktails and approachable yet thoughtful small plates. The beauty of this approach is that rather than committing to one starter and an entree, diners can nibble their way around the globe, trying everything from lamb shawarma to squid-ink tagliarini and oak-smoked duck breast.