In the beginning, there was Don's Club Tavern. A generation later, there still is. And while Don himself passed away this year -- his Sixth Avenue saloon better known as Don's Mixed Drinks, in honor of the neon martini glass glowing outside -- remains the best place in town to inhale a dose of secondhand smoke, down a lot of cheap drinks, and revel in the fact that there's no phone. Not for public consumption, anyway (unlike those cheap drinks). Now, as then, Don's is the Best Old-Time Bar in town.

Twenty years ago, Westword's first Best of Denver edition hit the streets of a much smaller city. A city overflowing with mobile hot-tub services, but without a single Cuban restaurant. A city with many shops devoted to the occult, but only a handful to computers. A city whose major housing stock was condos in Aurora -- empty condos in Aurora -- rather than lofts in LoDo, an unheard-of living concept in an area that had yet to earn its nickname. A city where a good cup of coffee was something to be celebrated, because it was so rare. A city where a sushi restaurant was described as "a little bit of L.A. in Denver." A city whose new, urban grocery store, a King Soopers at Speer and 14th Avenue, had just introduced the area's first "salad by the pound." A city with roller-skate, not skateboard, shops. A city with only two professional sports teams, one of which had just acquired a new quarterback named John Elway."A Hall of Famer for sure," read the toothsome one's 1984 award for Best Future.

Like Elway, some 1984 honorees were already well on their way to becoming institutions. Chanteuse Lannie Garrett earned the Best Long Goodbye that year -- and two decades later, she's still making plenty of noise in Denver. So is Dick Lamm, the governor of Colorado back then, a politician forever getting in trouble for his forthright comments about disabled children, the handicapped, Texans (never a favorite ethnic group in Colorado). To loosen up a crowd of educators before introducing the governor of Texas, this state's governor told 1984's Best Political Joke, about a Texan who died in Colorado and was too big for any coffin, so we gave him an enema and buried him in a shoebox. And Lamm was just warming up. That year, he also made controversial comments about Mexico -- a potential Iran on our borders -- and the elderly: We've got a duty to die and get out of the way with all of our machines and artificial hearts and everything else like that and let the other society, our kids, build a reasonable life. That's what Lamm said on March 27, 1984, and although those words will follow him to his grave -- once he does his own duty -- he's still talking, still stirring things up, spewing grim statistics in his new book on health care and inspiring a revolution in the Sierra Club with his current candidacy for that group's board.

Other familiar faces and spaces dot the pages of the Best of Denver 1984. The marble urinals in the basement men's room of the Victorian-era Oxford Hotel, where Bat Masterson allegedly emptied his other gun, are not going to be beaten in this or any other century. Is there a place with more Western flavor than the table under the two-headed calf at the Buckhorn Exchange? Maybe a seat at the Fort, Sam Arnold's replica of Bent's Old Fort, where you can still dine on Old West dishes, wash them down with gunpowder-laced whiskey and look out over a more-sprawling-by-the-second metro area. Both restaurants were big winners in 1984 and continue to be Colorado classics -- although the state doesn't have the trees to print all the honors they deserve. La Fiesta still serves the best crunchy chiles rellenos in town, the Bonnie Brae Tavern a great thin-crust pizza. Mustard's Last Stand remains our readers' choice for Best Hot Dogs. (Sadly, so does McDonald's for best french fries -- an award McD's has now won 21 issues running.) Rocky Mountain Seed Co., which earned Best Gardening Supplies in 1984 -- and no doubt deserved it 64 years before that -- is still a growing, and going, concern around the corner from Larimer Square, giving denizens of LoDo a feel for what that area looked like back in 1920. A few blocks away, El Chapultepec does the same for the '50s, serving up cool jazz and hot burritos to its third generation of devotees. Jump ahead to the early '80s at Pirate: A Contemporary Art Oasis, honored for Best Gallery Openings in 1984. The renegade art co-op continues to party on, even if the crowd has gotten a little more gray -- and the neighborhood around it decidedly more upscale. ("Discover Northwest Denver!" an ad in the 1984 Best of Denver chirped hopefully.) Wax Trax has gone from vinyl to tapes to CDs and back again, but that winner's song remains the same. And the Cherry Creek Bike Path -- past, present and future Best Bike Path winner -- just keeps rolling along.

Ron Zappolo, our Best Sportscaster in 1984, continues to be a crowd-pleaser -- the readers' choice for Best Anchor in 2004. Channel 9's Ed Sardella was Westword's pick as Best Anchor twenty years ago, and despite his best efforts to retire from the station he led to ratings prosperity over two decades ago, he's still on the air -- and still a frequent choice of readers. Likewise, Curly the Barber has retired from 1984's Best Barbershop at the Brown Palace, but he's occasionally called on to cut the mayor of Denver's hair.

Denver does have a new mayor, John Hickenlooper, who twenty years ago was a lanky, geeky geologist based in this city, a couple of years away from the oil company closure that would give him time -- and money -- to explore the new idea of a brewpub.

There are other changes, of course. In 1984, Denver had another new mayor, Federico PeÃa, who would give us a new airport and a boulevard with his name leading to it. The 1984 Best Route to the Airport now takes you to this year's Best Imitation of a Small Town, at the new-urbanism outpost that Stapleton's become. Although the Denver Boot still clamps eternal, our Best Parking Ticket Referee in 1984, Jesse Salinas, has moved up to guard duty for the sheriff's department in the parking office. (Parking, however, still sucks -- even if Hickenlooper did roll back downtown meters to 2001 levels.)

In 1984, Marilyn Megenity was looking for a new home for her moveable feast, the Mercury Cafe, a perennial award winner that today is a permanent institution on California Street. While the Tattered Cover Book Store already boasted a devoted local following, it had yet to move into the old department store on First Avenue that would make it a national destination. The Ogden Theatre was still showing movies. So were a dozen drive-ins in the metro area. Today, all but two of those are gone -- and the Cinderella Twins' Best Reprieve honor this year is unlikely to last.

Gone, too, are the Denver Bears, the Denver Tearoom, any Woolworth's (we'll quit missing the 16th Street store -- 1984's Best Place to Buy Plastic Icons -- only if downtown actually snags that rumored Target) and the Carousel Ball, once the social event of the season, which moved to Los Angeles along with its founder, Marvin Davis.

But so much has filled the massive space he left behind. Lots of Californians, for starters. And coffeehouses. And an entirely new generation of people who, like the Class of 1984, came to this city because they saw Denver as a land of opportunity. A place where they could pursue their dreams without the uptight trappings of the East Coast, without the self-conscious trendiness of the West Coast. A place where they could spend their weekends in the mountains (or think about spending their weekends in the mountains, anyway), and spend their weekdays trying to realize their vision for Denver. To fill it with art. And music. And great schools. And, yes, great loft projects. To make this city better. To make it the best.

When he ran for mayor, Peña's slogan was "Imagine a Great City." When Hickenlooper ran for mayor, he said it was time for Denver to "be a great city." And we've come pretty damn close, judging from the hundreds of winners -- some old, many more new -- in the pages that follow. 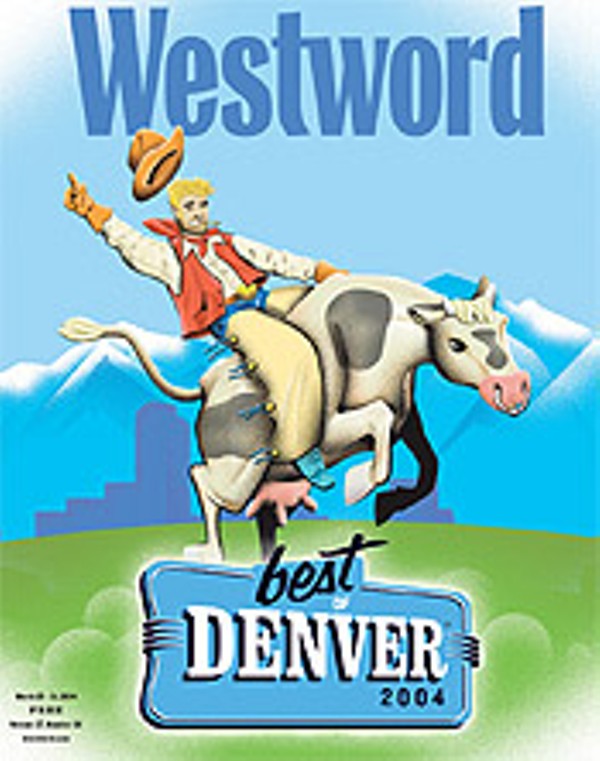