Listeners can usually guess what talk-radio hosts are going to say by which station employs them: Yakkers at conservative outlets will hit the typical right-wing buttons, just as those on liberal broadcasts can be relied on to promote left-of-center talking points. But while Gloria Neal is currently employed at a progressive-dial spot, her wide range of experience on radio and TV — she's worked at KOA and the local Fox outlet as well as CBS4 and the Denver Post — helps her avoid the usual stereotypes. She's more common-sense than doctrinaire, and that makes her show entertaining and informative for a wider range of listeners than is usual in this genre.

Once upon a time, Jim Benemann was a new kid on the Denver TV-news scene. But after briefly leaving the market, he returned to fill the CBS4 anchor chair in 2003, and in the decade-plus since, he's grown into his role, providing much-needed gravitas when the subject is serious, but shifting easily into avuncular mode once the mood lightens. Unlike many of his peers, who are usually better at one of these skills than the other, Benemann is an all-purpose anchor with an accessible persona built for the long haul.

Back in the days when Denver was a two-newspaper town, 7News was the odd station out — the only one of the traditional big-three network outlets that didn't have a content-sharing agreement with a Denver daily. As such, the station developed a scrappy, chip-on-its-shoulder attitude that's still part of its culture today, even though, in a notable role reversal, it's the broadcaster currently partnering with the Denver Post. The news at 7News tends to be harder, the investigative pieces more substantial, and the on-air personalities, led by Anne Trujillo and Mike Landess, solid and professional enough to reward viewers who schedule time to tune in.

Whereas too many TV stations are boys' clubs when it comes to weathercasters, 9News is the opposite, with longtime star Kathy Sabine supplemented by a supporting cast that includes Belen De Leon and Danielle Grant (plus token guy Marty Coniglio). As a result, Becky Ditchfield sometimes gets overlooked. But she's been a steady presence since joining the station in 2007, and her forecasts are notably B.S.-free. Rather than making every storm system that comes through town seem like a snowpocalypse, she delivers meteorological information in a straightforward, low-key way that's more about helping people get through their day than about sparkling for the camera.

How did Corey Rose ever decide to go into TV news? Her glamorous look makes her seem more like a model, a spokeswoman, or one of those actresses who always seem to travel with their own personal wind machine. Her flowing locks, which appear to encompass all the colors of the follicle rainbow without looking bizarre, are so lush and lustrous that they cry out to be whipped around regularly, Willow Smith style. See if you can work that into the next newscast, Ms. Rose. We'll be watching.

One of the busiest reporters on the local scene, Justin Joseph keeps most of his hair close-cropped — so it doesn't start going wild when he's doing a live shot in gale-force winds, for instance. But lest you think he's too square, he rocks a cheeky peak up top to let you know he's hip, he's happening, and he isn't afraid to have a little fun when the subject strays from death and destruction. Fox31 has long been Denver's leader when it comes to TV dudes' coiffures (here's looking at you, Phil Keating!), which makes Joseph the station's hair apparent. 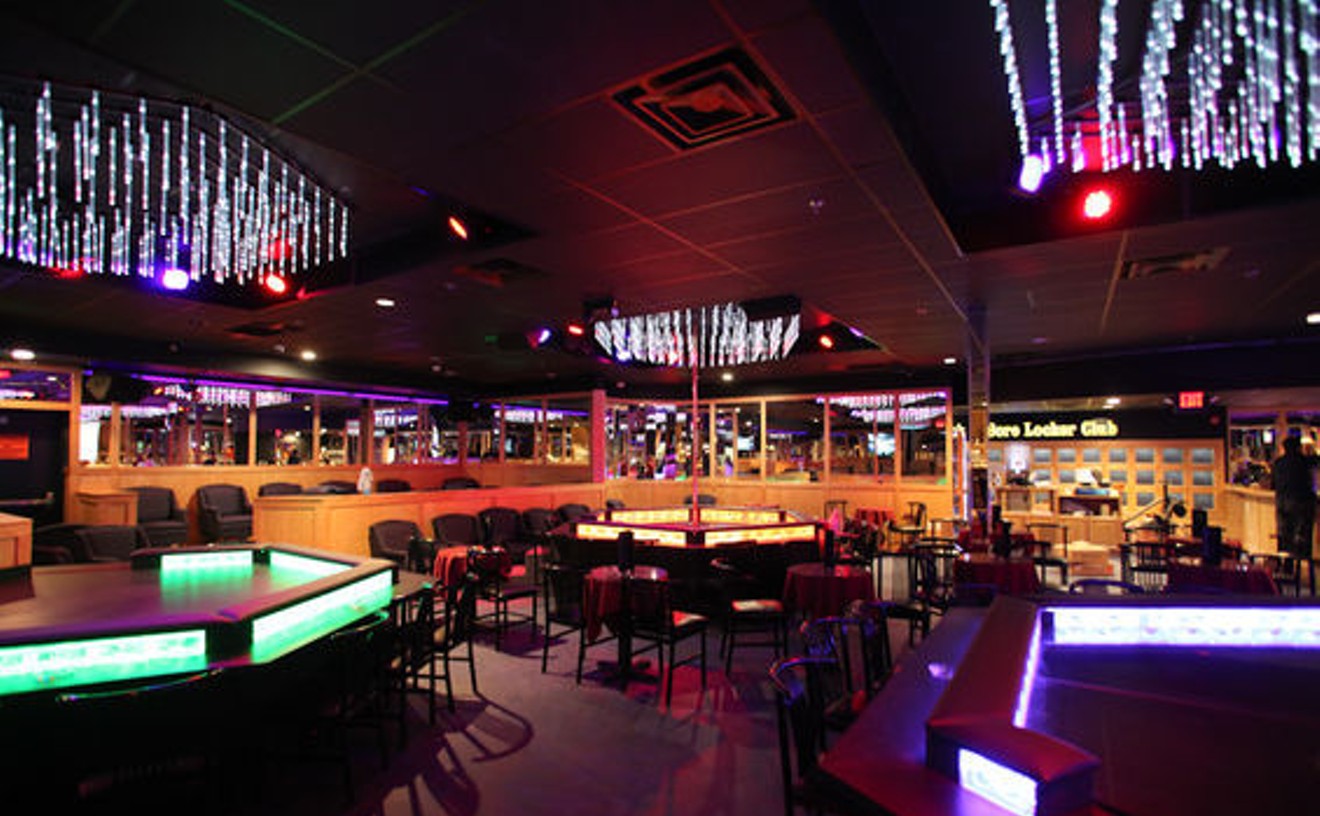 For three decades, Shotgun Willie's was housed in an unflashy little building next to the Glendale Target parking lot, entertaining the masses as only Shotgun Willie's can. But in 2013, the owners of the gentleman's club decided to replace the droopy old digs with firmer ones. Set back from the street, the new building is bigger and fancier but still manages to look a little retro (sort of a '90s look, rather than the '80s-style aesthetic of old). Shotgun's also acquired a new sign a little while back — an exaggerated version of its limp-shotgun logo. We hope those lights stay lit for a long time.

You might not know his name, but you've seen Kevin Hennessy's hand-painted work both inside and outside of City, O' City, Nooch Vegan Market and Cafe Europa. In fact, his high-style handwriting is everywhere, proving that commerce-oriented art doesn't have to be a graphic-designed mess. From the simple restroom signage at Adrift Tiki Bar to the vertical announcement of Ironwood's presence on burgeoning South Broadway, Hennessy's expressive calligraphy is subtle but comforting, a throwback to a time before computer-generated banners and pixelated signs.

Best Way to Score a Ride in a Famous Car

Wanna take a spin in the Ghostbusters Ecto-1? How about Scooby-Doo's Mystery Machine? When Colorado Movie Cars hosts its annual haunted-house tour/fundraiser, you and your friends get a VIP ride and extra-special treatment at four of the area's scariest haunts, followed by a cruise around the city that will having strangers snapping pictures on every street corner. And while you can't climb inside during the rest of the year, the various Colorado Movie Cars can be rented as outdoor centerpieces for events and parties, so if Herbie or KITT are closer to your ideal wheels, this fleet of film fanatics has got you covered.

Named one of Westword's 100 Colorado Creatives, Kalina Ross is a superstar at making everyone a part of her parties. A former partner in Urban Cipher, a group supporting entrepreneurial activities through events featuring local small businesses, Ross branched out on her own for the holiday season with the Night Fair Before Christmas, an all-ages music-, art- and merchant-oriented winter gathering and craft fair. During the summer, she's been known to open up her back yard on select Sundays for the Love Buzz Patio Cafe, a micro-eatery she runs out of her kitchen and staffs with her two daughters and mother. A cornerstone of Ross's work is the idea that children are the future, and she includes the little ones in every event, brunch and party she throws.