Not long ago, CU was regarded as a football school. Now that tradition lies not just broken, but shattered. So thank goodness for the men's basketball team. In the past few years, the hardwood Buffs have grown from surprising upstarts into a consistent squad whose members absolutely expect to be playing at tournament time. This season likely would have been even more impressive had top prospect Spencer Dinwiddie avoided a season-ending knee injury. Yet promising youngsters such as Xavier Johnson and Wesley Gordon suggest that the future will be even brighter than the present.

It's only been three years since Tad Boyle became head coach of CU's men's basketball squad. But in that time, he's managed to remake the team in his image, infusing the program with the winning spirit he learned from the legendary Larry Brown while a player at Kansas. The back-to-back NCAA tournament appearances in 2012 and 2013 were the first double dip for CU in half a century, and we expect more records to fall the longer Boyle sticks around Boulder.

Fans can debate whether Patrick Roy was the best Avalanche player ever, but there's no denying that he was the most fiery and charismatic — and these qualities happen to be just what was needed to inspire the current generation of Avs. Prior to Roy's second coming, the talents of individual players didn't seem to translate into wins. But since his return to Colorado, announced via a glass-shaking freakout that made sportscasts nationwide, the team has started to reach its potential. A Stanley Cup is still a ways off, but at last the Avs are headed in the right direction. And Roy's a big reason why.

Usually, this honor goes to the folks who call games on TV or radio — like, for instance, last year's winner, Voice of the Colorado Avalanche Mike Haynes. Kyle Speller, in contrast, is the Nuggets' public-address announcer — but for those who see the team live at the Pepsi Center, he's nearly as big a contributor to a great time as Supermascot Rocky. His vocal whoops and swoops when the squad is doing well are enthusiasm-igniters, his downbeat tone when the other team comes through lets fans know he feels their pain, and when the "Kiss Cam" is switched on, even Barry White couldn't set the mood better.

When Lionel Bienvenu came to Denver way back in 2001 after a high-profile stint with Fox Sports, he initially seemed to be trying a little too hard to import cable-TV snark to a traditional local-news broadcast. But as the years have gone on, either Bienvenu has mellowed or we have. He's still plenty witty, but he doesn't let the pursuit of humor get in the way of finding what's most interesting in any game. Better yet, he's eager to share his opinions about the sports news of the day, and he doesn't pull his punches just to keep the area franchises happy.

After we named CJ & Kreckman, co-starring Charles Johnson and Nate Kreckman, the best local radio sports show of 2013, the powers-that-be at ESPN Denver showed their appreciation by promptly breaking up the team. But this time around, fixing something that wasn't broken turned out okay. Johnson is a good match with his new partner, veteran sportscaster Les Shapiro, and Kreckman, the most underappreciated talent on the local airwaves, is bringing out the best in his Locker Room teammates: longtime broadcaster Gary Miller and, especially, Broncos Ring of Famer Tom Nalen, whose lack-of-style style is irresistibly unpolished. Maybe the bosses knew what they were doing for once.

The controversy over Denver Boone is one of the most twisted to emerge in recent years. Designed by a Walt Disney artist, DB was the University of Denver's official mascot from 1968 to 1998, at which point complaints from various interest groups, including Native American organizations that saw him as a Manifest Destiny figure, led to his being replaced by Ruckus, a red-tailed hawk that excited no one. But Denver Boone never truly went away, and with DU still mascot-free after several subsequent efforts either sunk or stalled, he's rested and ready for a comeback. While he may never get that chance, he remains the epitome of the Pioneers spirit for plenty of alums.

Okay, so their outfits might be a little weird — especially the long-sleeved spandex "jerseys" that end right below the bust, making them about an eighth as long as normal shirts. But the women who make up the Colorado Avalanche's first Ice Girls squad are skilled skaters who serve a dual purpose: looking hottttttt during breaks in the game and using shovels to help clear the ice of the pesky shavings that can slow players down. These ladies are not all pretty faces and flat stomachs, however. As their bios reveal, most are accomplished figure skaters or hockey players. Maybe someday, women's hockey teams will take a cue from the Avalanche and hire Ice Boys in banana hammocks to wield shovels in the same way.

Keep your eyes on the TV, no matter how fetching those lasses look in their short kilts and tight shirts. The Tilted Kilt on the 16th Street Mall took over where the ESPN Zone left off. This link in the national chain is a fine place to dig into a plate of Irish nachos, swill a cold beer (or three) and watch the game. Whatever sporting event you're interested in is bound to be on one of the big screens — and on balmy days, you can watch your game while sitting on the patio, which also lets you partake in the great sport of people-watching when there's a break in the on-screen action. Although there are other Kilts in the metro area, the mall-side location tilts this one over the top. 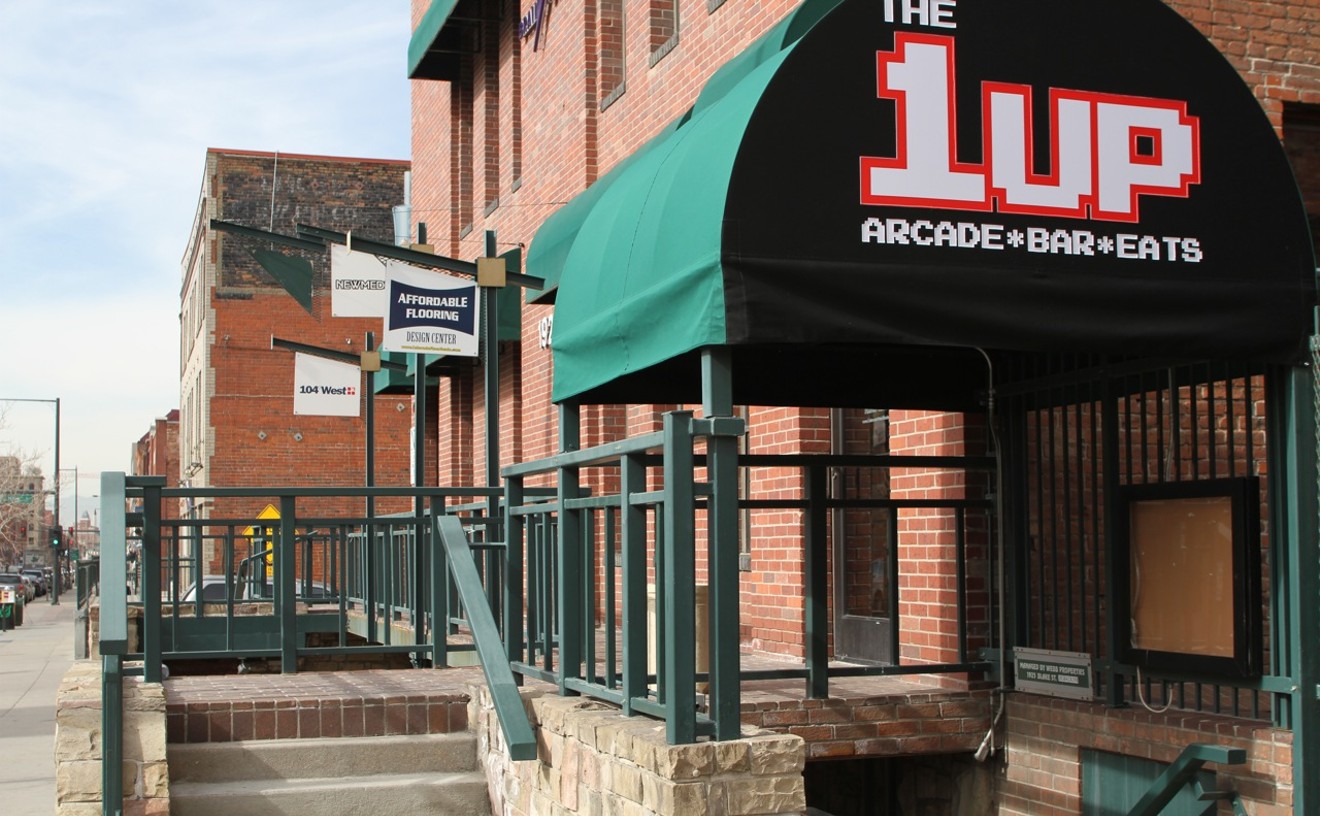 The downtown location of the 1up arcade bar is a cross between Jeff Bridges's Tron arcade and a neighborhood dive. Flashy 8-bit colors and music loops pour out of its 45 vintage arcade games, while geeky bartenders pour craft beers and shots to sate the relentless audience of quarter jockeys night after night. At just a quarter or two a pop, the 1up's finely curated selection of games and pinball machines is as likely to evoke childhood memories as it is to provoke heated challenges between drinking buddies. Thankfully, there's a can of Olde English or an Ectoplasm shot waiting at the bar to settle a dispute or toast an extra life. The arcade never died; it just grew up, got a Dig Dug tattoo and started pounding back PBRs.