Because the weekend is just not long enough for Denver's favorite meal, the Hornet extended its brunch to include Friday, too. That means from 10 a.m. to 3 p.m. Friday through Sunday, you can buy yourself a pass at the Bloody Mary bar for just $2, and get a glass with ice and the house vodka, to which you add Bloody Mary mix (spicy or not), along with assorted sauces, seasonings and veggies. And in case this Bloody leaves you hungry, the Hornet has plenty of brunch deals, too.

We've got an offer you can't refuse. The Bloody Mary bar at Gaetano's — a seventy-plus-year-old restaurant in northwest Denver started by the Mob-connected Smaldone family, then acquired by the Wynkoop Brewing group and finally by independent owner Ron Robinson — is a real liquid asset in this city. The $8-meal-in-a-glass starts with your choice from three vodkas (including one pickled by the Gaetano's bar), and then you add whatever you want from 75 sauces (hot or not), along with meaty items (succulent shrimp, jerky, housemade sugary bacon) and vegetables. Weekend bartender Cailyn Smith is in charge of this bountiful bar feature, and it's reason to raise a glass not just to a single Bloody Mary bar, but Gaetano's long history. 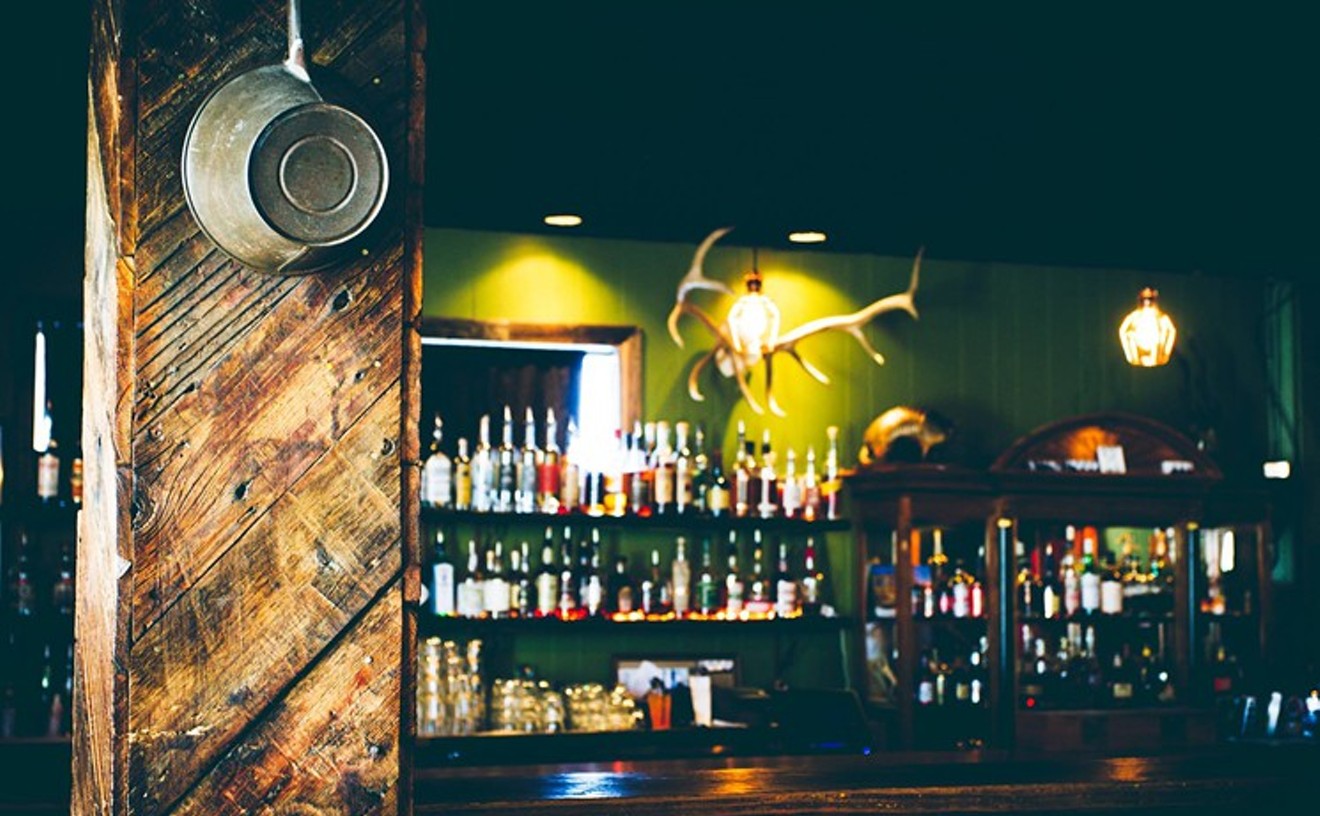 Denver musician Nathaniel Rateliff teamed up with a couple of his bandmembers and the owners of the hi-dive to take over the former Bushwacker's Saloon and unveil it as the Overland in the summer of 2016. But don't go here because you're a fan of the Night Sweats; the team has created a bona fide Broadway watering hole, worthy of a stop for late-night whiskeys after a long shift, beers with friends at happy hour or a solid plate of grub (don't miss the poblano hush puppies) in an unpretentious setting. While not exactly a dive, the Overland feels lived-in and low-key, with just enough dining-room space for those who want to get a little rowdy without disturbing the regulars at the low-slung bar. That bar is a wonder in and of itself, with a sunken floor so that bartenders greet you at eye level rather than looking over your head for the next customer. Grab a stool and a drink and soak in the atmosphere without worrying about obscure cocktail ingredients or a head-spinning array of fancy beers. Sure, there are fancier saloons in town, but the Overland is where you'll want to go day in and day out, when everything else in Denver feels too fancy by half. 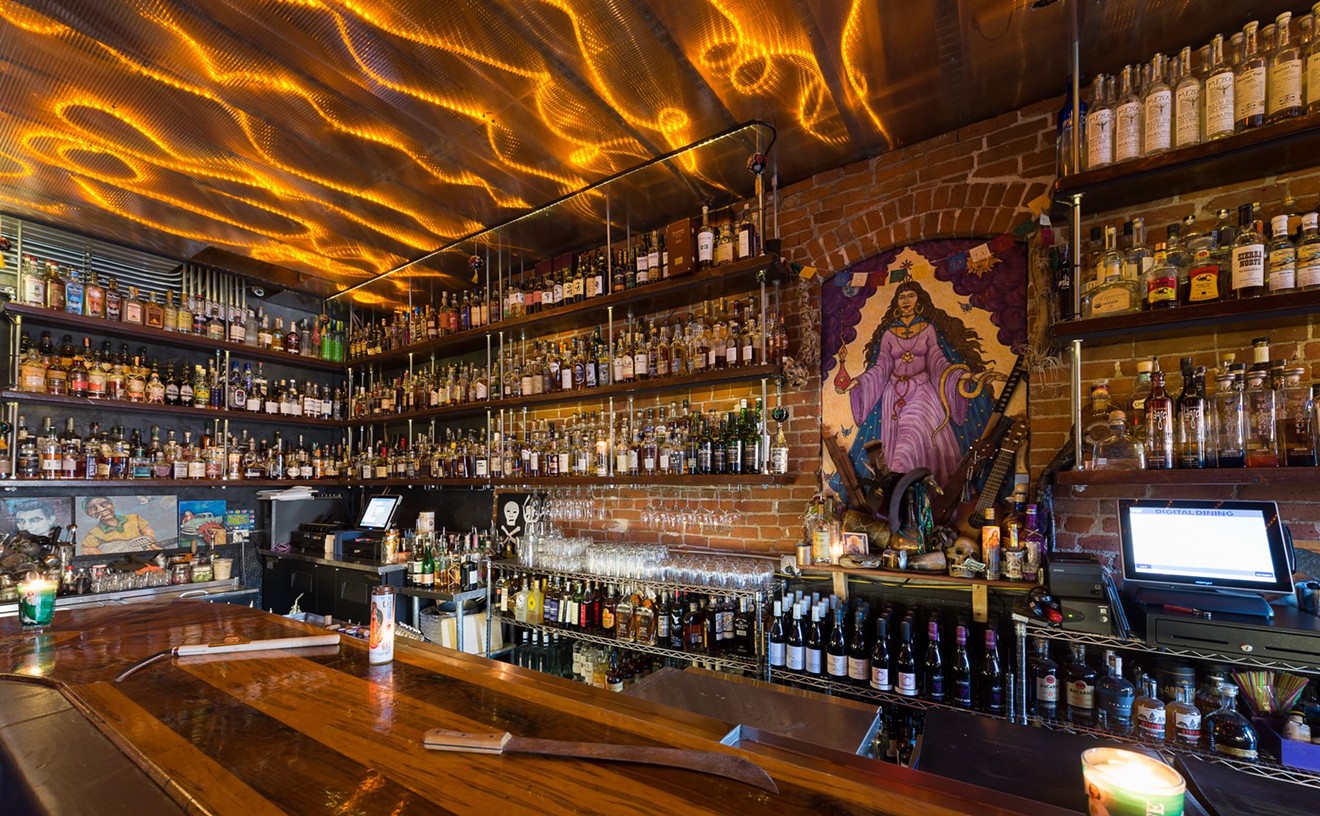 "The list isn't accurate," a bartender says apologetically, as she hands over the thick binder that comprises the spirits collection at Finn's Manor. "Let me know what you like, and I'll help you find something good." The reason you can't work from the list, she explains, is because owner and "Voice of Whisky" Robert Sickler continues to add bottles to the shelf without updating the paperwork — there are now more than 160 to choose from. Still, evidence of Sickler's obsessive curation can be found in that binder, which includes both big-name distillers and small craft shops and contains detailed tasting notes for every spirit listed. The lot runs deepest in Scotch, with several expressions from well-known regions like the Highlands as well as less-explored areas like the Lowlands. But there are plenty of other spirits to choose from here, including all-American bourbon, a broad store of Irish whiskeys, dozens of ryes, and international whiskeys from Japan, France and India. And since Finn's prices its pours reasonably, you can afford to taste a flight.

There's something about this new Highland eatery that makes you feel like you've been here before, perhaps years ago, long before restaurateur Jesse Morreale opened the laid-back lounge. That's partly because of the 1950s American theme he's used in the space, which gives it a well-worn aura and a comfortable vibe. But the Thunderbird also feels old-school because of its menu, a list of comforting favorites you might find in a classic diner: sloppy Joes, deviled eggs, turkey burgers and tomato soup with a grilled cheese sandwich. These dishes are flavored by more than nostalgia, though; they're just plain good. 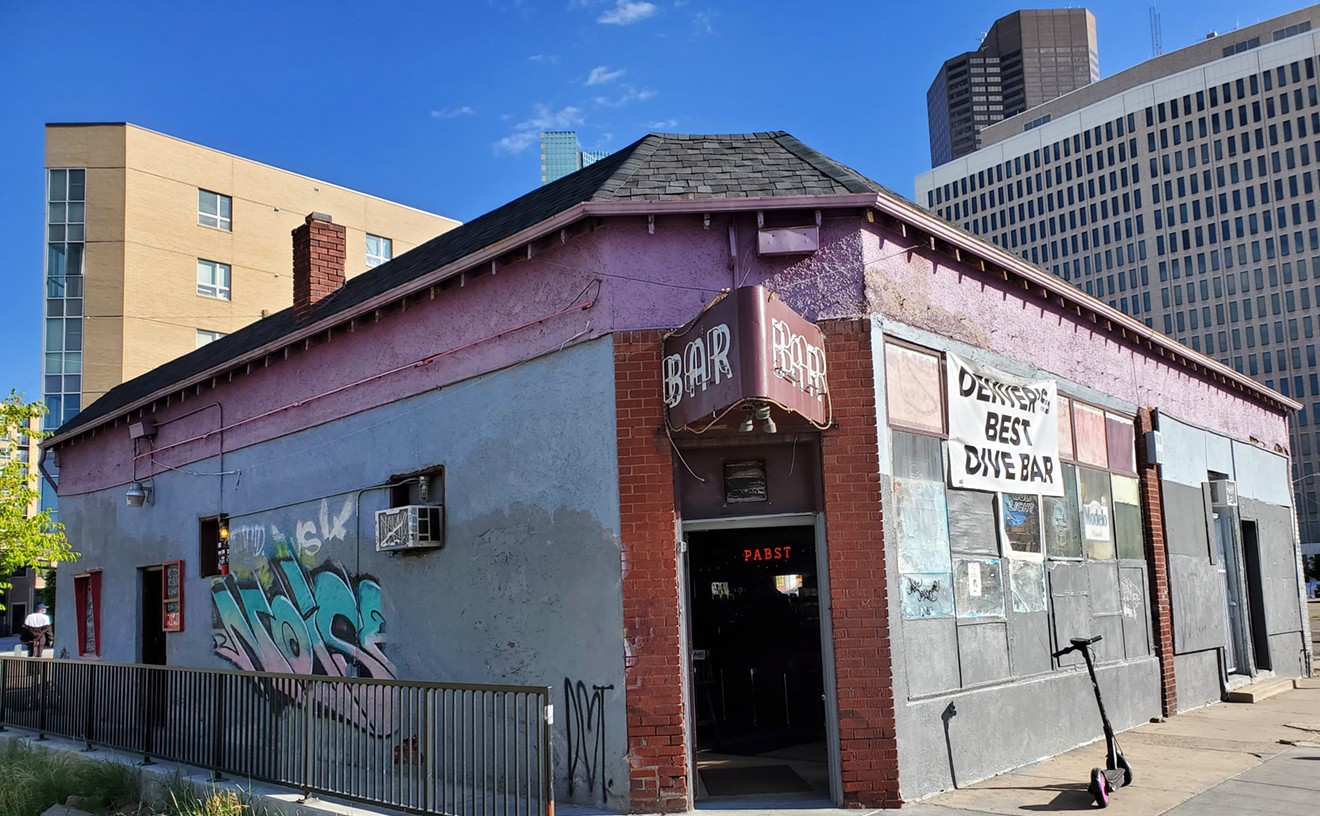 Dive bars are drying up in Denver, swept away by tides of development. We've lost many of this city's celebrated saloons over the past few years, which makes the survival of Carioca Cafe — better known as Bar Bar, thanks to the neon outside — something to celebrate. Perhaps with a drink or ten. For more than a century, this spot has held down the corner of Champa and 20th streets, serving drinks nineteen hours a day to an assortment of regulars, would-be Great American Novelists, hipsters, transients and rockers (during the Eisenhower era, it reportedly served something else in the game room, then a whorehouse); today the entertainment focuses more on the jukebox, live-music acts and endless inebriated conversations. The drinks are stiff, the bathrooms awful, and the atmosphere beyond compare. Leave the credit cards at home; this place is strictly cash and carry on.

Best Dive Bar With a View

For more than forty years, tipplers have gathered at the Lakeview Lounge on the last day of Daylight Saving Time to toast the sun as it rises over Sloan's Lake. From the well-worn bar, they have a great view of Denver — and just how much Denver is changing. Cranes now mark the downtown skyline to the east; to the south, development is exploding around the former St. Anthony Hospital. We have seen the future, and it's enough to drive us to drink. Fortunately, the Lakeview is there to serve.

The Welcome Inn also goes by the name New Welcome Inn, but there's nothing new about this bar that's been run by the same family for almost thirty years; the music is loud, the games popular, and the linoleum on the bar worn by generations of elbows. What's new is the area around the bar: This was once one of the darkest corners in Denver, but since the Blue Moon Brewing Company opened a 30,000-square-foot brewery and restaurant right across the street, it's become a clean and well-lighted place. Which means that plenty of developers have to be eyeing the prime corner occupied by the Welcome Inn. Enjoy the joint while you can. 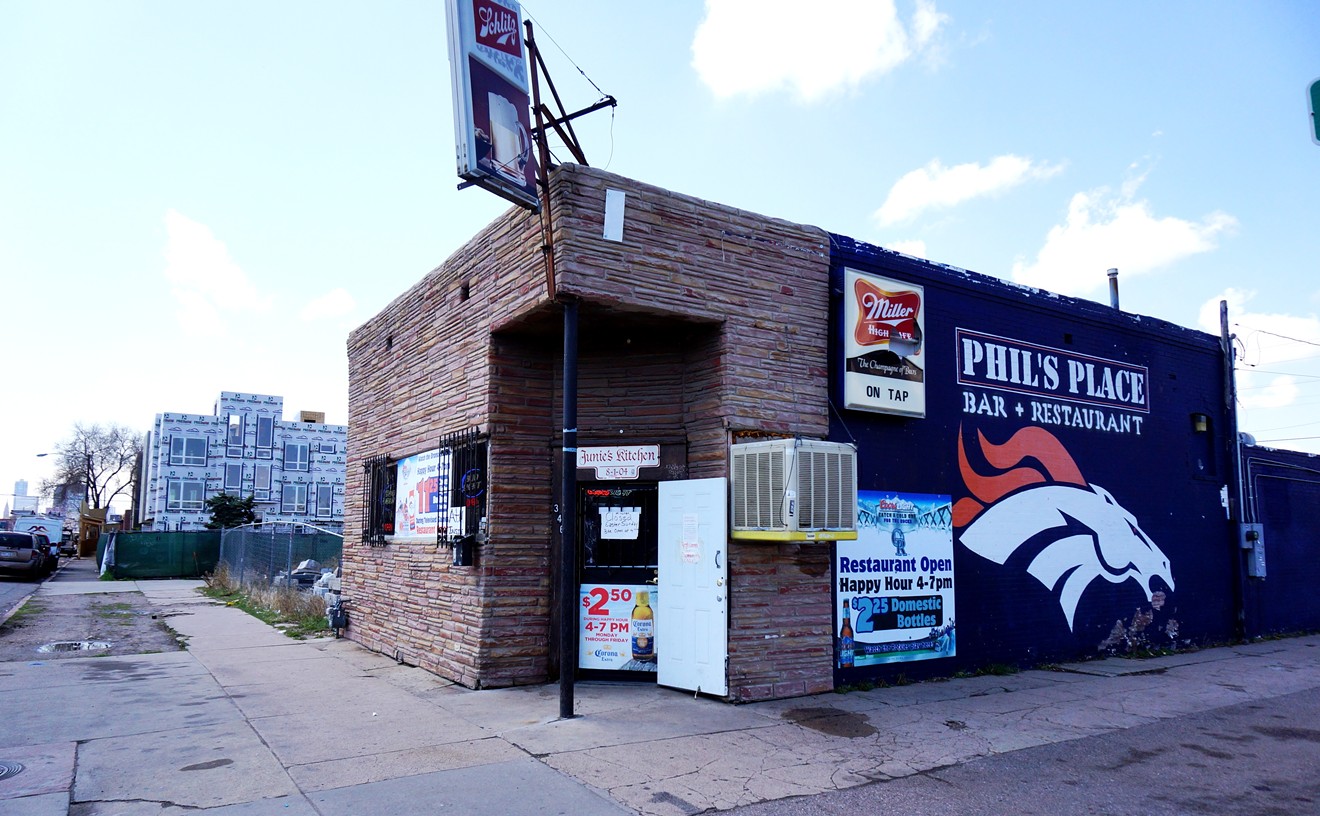 Mark Antonation
Phil's Place is one of the neighborhood's last classic dive bars.

Don't make the mistake of thinking that Phil's Place is a dive bar, even though it's certainly the most modest spot in this booming area of RiNo, across from both the Exdo Event Center and a new Chuburger. But Phil's Place long pre-dates those spots; Phil Garcia bought the Our Place bar before RiNo was even considered a neighborhood, then turned the game room into a kitchen for his mother, Junie, a legendary cook from the Bamboo Hut. She still turns out her Mexican specialties several days a week until the kitchen closes at 4 p.m.; Phil's father, Gary, is often behind the bar. And seated at the stools in front of that bar? Entertaining regulars who can tell you just how much this neighborhood has changed, and likely a few developers sniffing around this prime piece of property. 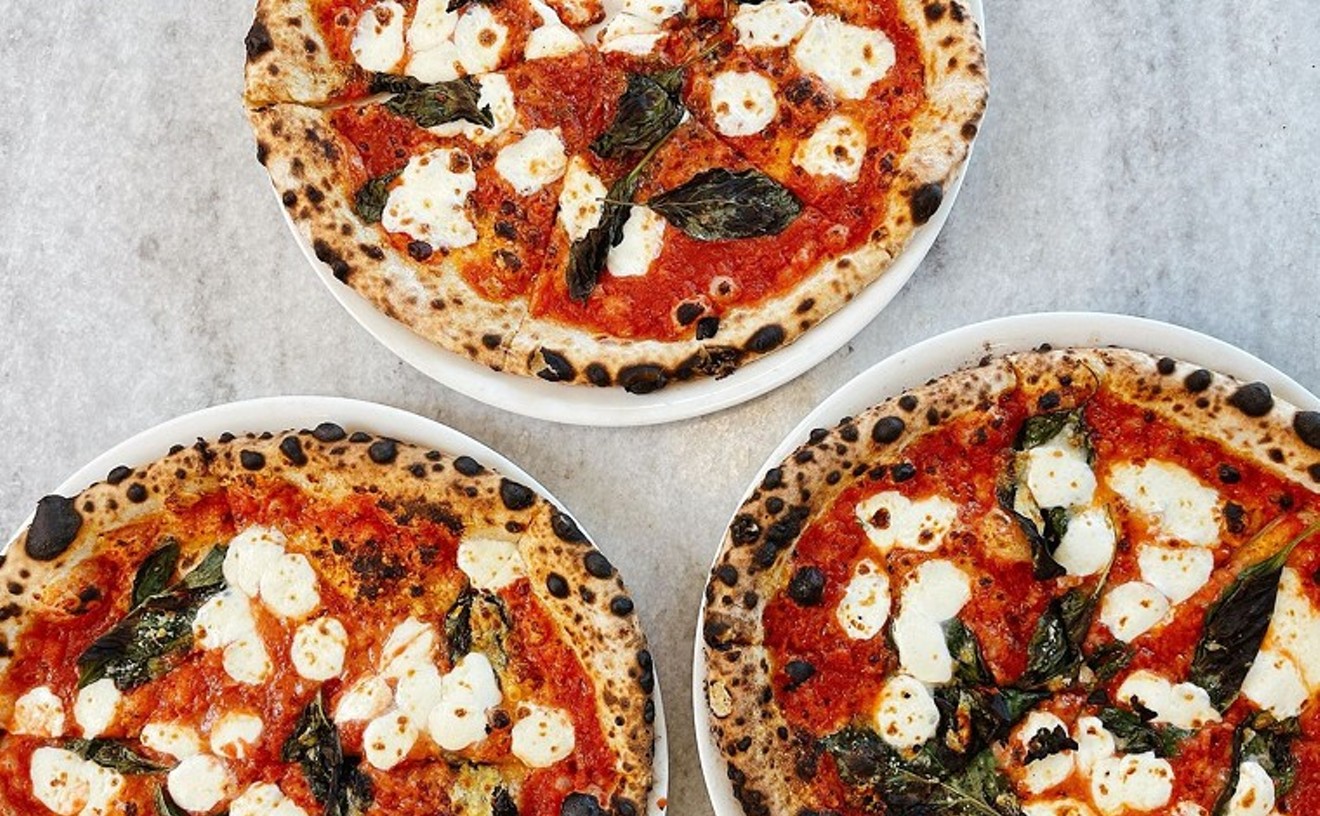 Denver isn't known for its late-night revelry, but RiNo stays active a little later than most neighborhoods, thanks to a hip, young demographic and a wide variety of options for bar and restaurant hopping. Cart-Driver, a wood-fired pizza joint wedged into a reclaimed shipping container, keeps the party going with a $5 menu (for both food and drinks) from 10 p.m. to midnight every night of the week. The selection's not huge, but a Daisy pizza (think Neapolitan Margherita) or some sardine toast will help soak up a perfect Manhattan, or you can go hipster with a shot of Fernet and a Prost pilsner. Twenty bucks will take you through the whole happy-hour menu before it's time to give up your seat and move on, or you can hang out over the pizzeria's $5 canned beers (priced that way whether it's happy hour or not), which include several local brews. Nighttime is the right time to land one of the best pizzas in town for less than half the standard price.