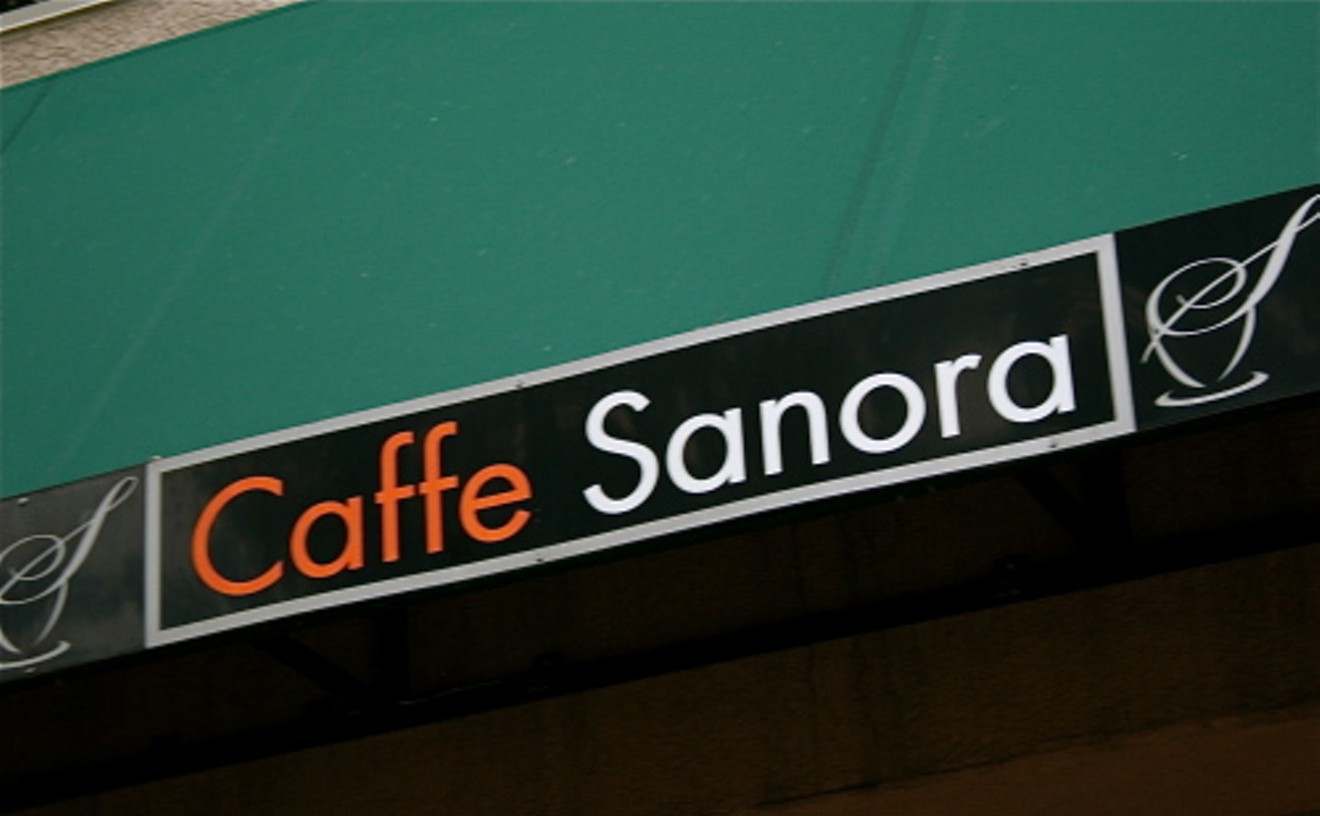 Cross the threshold of Caffe Sanora and the rowdiness of East Colfax fades away. The place is quiet but not library silent, as a chatty mix of business-casual regulars trickle down from the offices above, gaggles of students meet up for a board game, and other characters pop in off the street for a beer or cup of fresh-brewed coffee and stay for the food. The menu at this small-but-mighty operation includes incredible salads with fine cheeses and seasonal berries, thick and creamy soups, bold breakfast items and quiche options. The atmosphere encourages lingering: Large windows let in the sunlight and a mix of couches, tables and a perfect-sized porch ensure ample seating. The service is far from pretentious, a throwback to a time when "What can I get ya?" was the kind of affectionate greeting that could be the beginning of a beautiful friendship.

In this world of hurry up and wait, personal digital devices have become our steady companions — but not at Pablo's Coffee on Sixth Avenue. While phones are as ubiquitous here as anywhere, this Denver coffee shop's absence of wi-fi means more talking, more laughing and more staring into the eyes of your Tinder date (you know, instead of looking down at the screen where you two first met). Grab a cup of joe at this craft-coffee institution — Pablo's was one of the first indie roasters to stake a claim before the city got hip — and settle into the couch-filled corner living room or take a seat at the small bar top and watch the baristas at work. 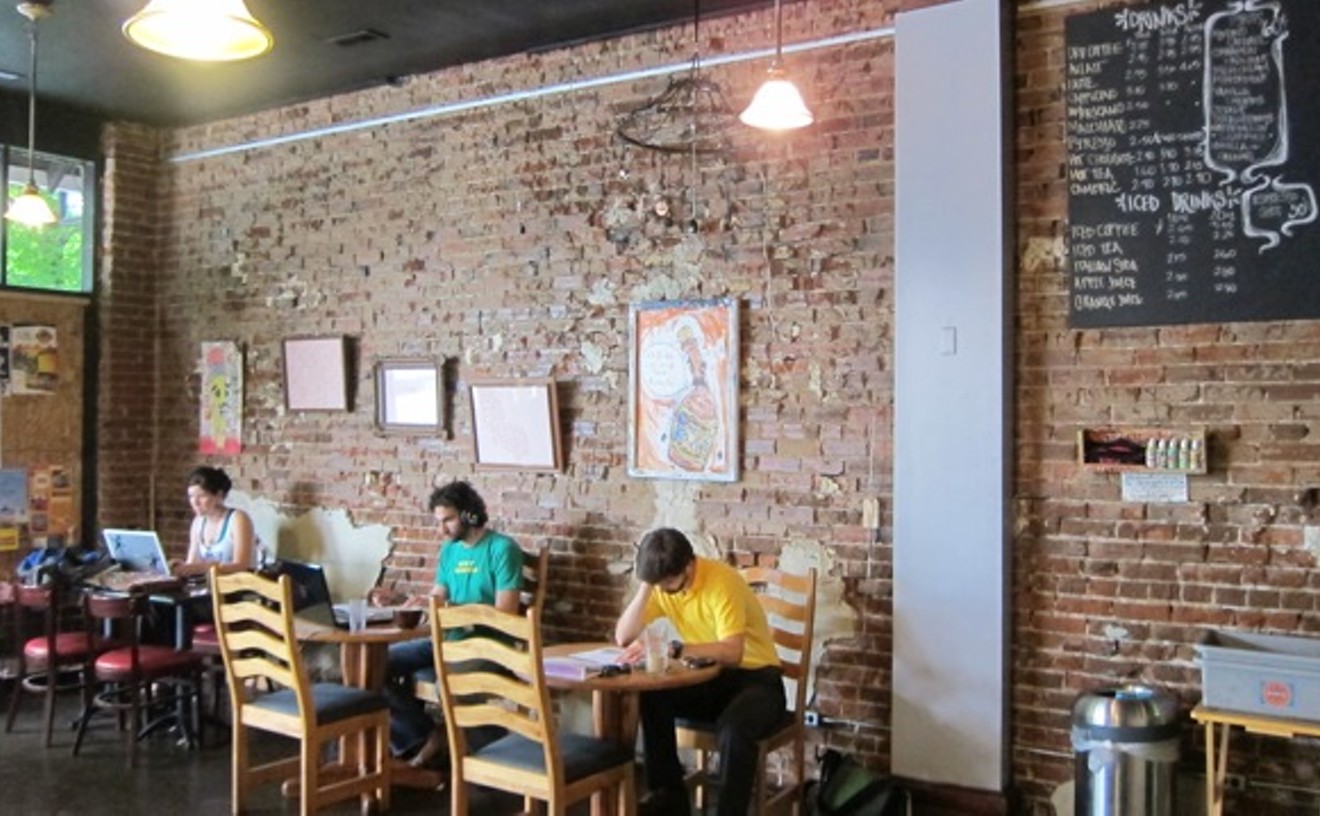 Sometimes your ability to get a seat can be the determining factor in which coffee shop you go to. Cafe Europa always seems to have a spot open, whether it's a table for two or a seat on the spacious, sunny patio that can accommodate a big, chatty group. The calm and inviting interior is complemented by music that's just the right volume, making this the perfect spot for studying or gabbing over a latte. If you're pulling an all-day study session, there's a stellar breakfast and lunch menu with plenty of vegetarian options to provide good, healthy brain fuel. One warning: While you'll be able to find a seat in Cafe Europa, snagging a parking spot is tougher.

Sojourners is the quintessential neighborhood coffee shop, a sneaky little spot tucked away in a strip mall in the Virginia Village neighborhood. Sojo's, as it's known by patrons, has walls adorned with local art, plentiful seating options and a true living-room feel that no chain can ever capture. Along with an assortment of specialty lattes and hot tea options, the shop carries local kombucha, baked goods and an assortment of delicious sandwiches — try the West Coaster or the Old Italy — plus paninis, burritos and more. If you're in a hurry, Sojo's isn't the place for you; these baristas take their latte art seriously, crafting beautiful beverages while happily chatting with regulars and newcomers alike. Welcome to the neighborhood.

A beverage that fell from heaven and by some stroke of luck landed in Denver, the Venetian Cream Coffee at the Molecule Effect is so good, it has to be divine in origin. Buttery-smooth and tooth-achingly sweet, this coffee drink comes straight out of a tap like a swirling tan ribbon of liquid dessert. Served over ice, the chilled concoction is too good to set down. But don't chug it; this nectar of the gods is really meant to be savored. 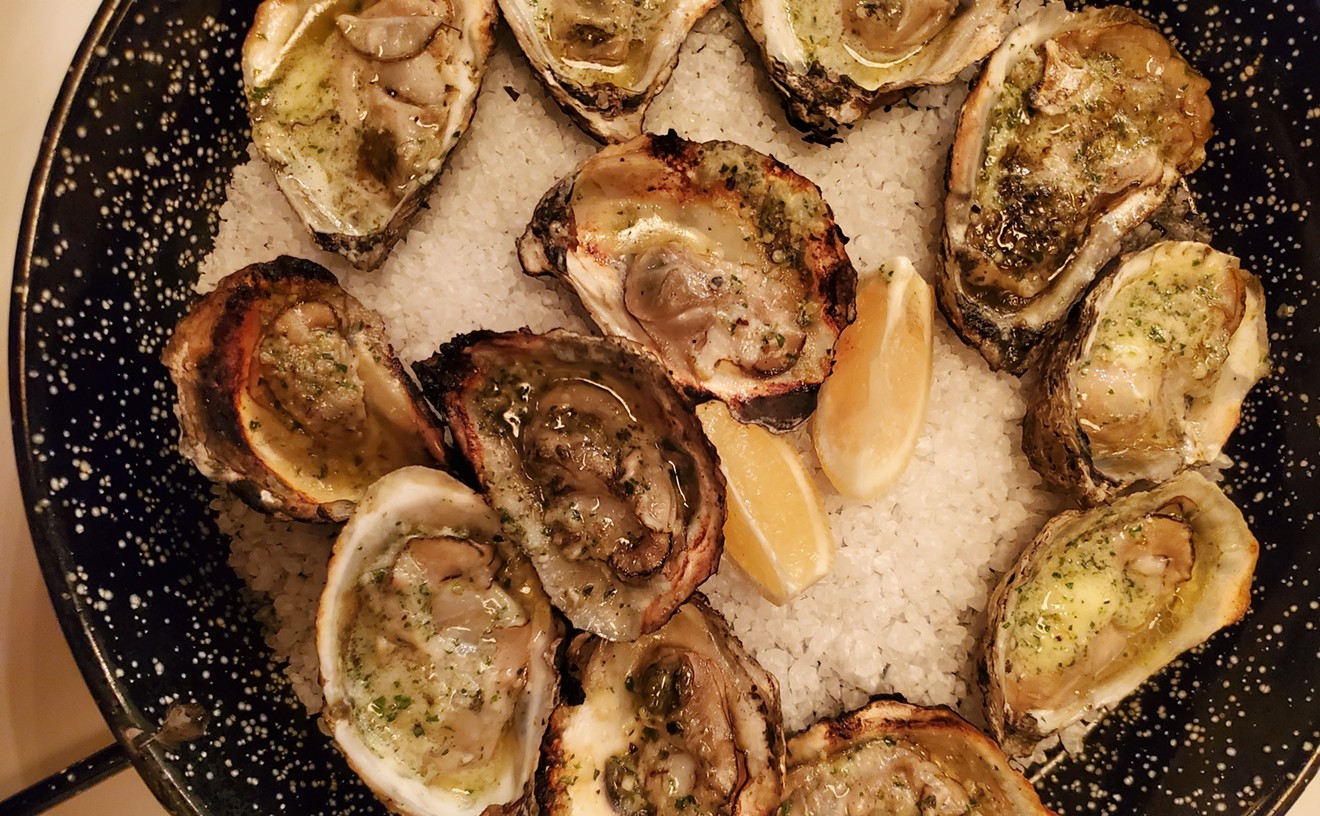 Not until Fish N Beer came along did we realize what a rut Denver's seafood restaurants had fallen into. Thanks to chef-partner Aniedra Nichols and chef-owner Kevin Morrison of Tacos, Tequila, Whiskey (aka Pinche Tacos), this sardine-can-sized restaurant will leave you craving things you didn't even know existed. Who could've predicted that we'd fall head over heels for whole grilled fish, tiny bones and all, or that smelt fries, made from slender, cornmeal-crusted fish, could be more addictive than their veggie counterparts? Would anyone have thought that blowfish tails could fry up into a lighter, crisper buffalo wing? Or that sea-based charcuterie — e.g., whipped tuna tonnato, smoked fish spread and soy-glazed salmon collar — could be so delicious that the memory of it will haunt you every time you order the standard stuff again? There's more to this sliver of a restaurant than seafood, including a host of sides that would make any steakhouse proud. Speaking of which, considering that Fish N Beer is a seafood joint, it serves a damn good steak, too.

Chef Nicholas Kayser took over the kitchen at Vesta last fall, ushering in a new era (and ditching the "dipping grill" descriptor) for the twenty-year-old LoDo restaurant. Among Kayser's new roster of dishes is a lobster cioppino that has its roots in San Francisco's Italian fishing community, but which the chef has accented with a French flourish. Mussels, clams, shrimp and sea bass all swim together in a saffron-tomato broth, lending flavors both bright and earthy. A curled lobster tail joins the pool party, carrying a saffron rouille straight from the coast of Provence. The dish is so evocative of seaside vacations and wharf-front seafood shacks that diners with fond memories of trips from long ago might get a little misty with nostalgia.

Best Restaurant That You Thought Was a Fish House

Denver restaurant maven Troy Guard opened Mister Tuna in the Industry building on Brighton Boulevard in the summer of 2016 to near-instant acclaim. Near-instant, that is, after first-time visitors recovered from dashed expectations that the place was a fish house, based on its fishy moniker and Guard's Hawaiian upbringing. Sure, you'll find a little sushi and other fruits of the sea on the menu, but no more than at most modern, upscale eateries. Turns out the name is a reference to the chef/owner's father, known as Mister Tuna because of his love of sport fishing and scuba diving; a cantankerous family parrot was also given the name. For more background, check the hidden patterns in the stunning wall mural at the far end of the dining room or the tiny Guard family photos in the hallway to the restroom; don't forget to glance into the kitchen. Guard's main focus at his newest restaurant (with several more on the way in 2017) is wood-fired cooking, so lamb, chicken, beef, pork, the occasional rabbit and, yes, whole fish see time on the spit over oak flame and charcoal, with marvelous results. A meal here is as eclectic and dazzling as Guard's own home state. 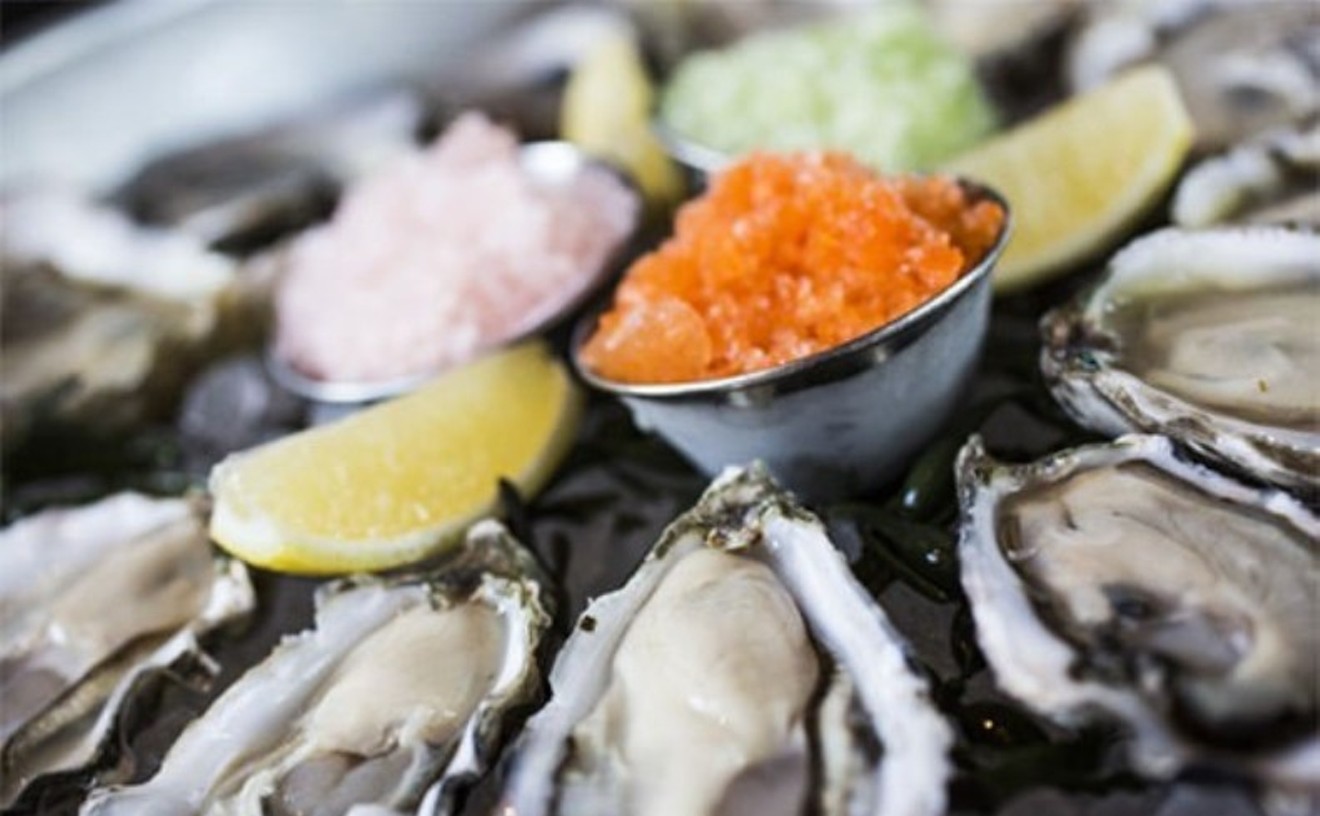 The oyster is a deceptively simple food: Open a shell, splash in a little condiment, and slurp. But maximum pleasure in this scenario requires maximum care: You want peak freshness, skilled shucking and thoughtful accoutrement, and Stoic & Genuine, the seafood shrine tucked into Union Station, definitely takes things to the max. The restaurant goes to great lengths to source specimens from the East and West coasts, giving you a chance to taste a seasonally shifting bounty each time you stop by. And you'll stop by often, because the raw bar handles its oysters as if they were rare gems, serving up iced trays of glittering mollusks with a little horseradish, a little mignonette and maybe a little granita, if you so desire. Stoic & Genuine also has a thoughtfully curated list of wine and cocktails that match well to oysters; we recommend a glass of tart, light Muscadet or a Bloody Mary. 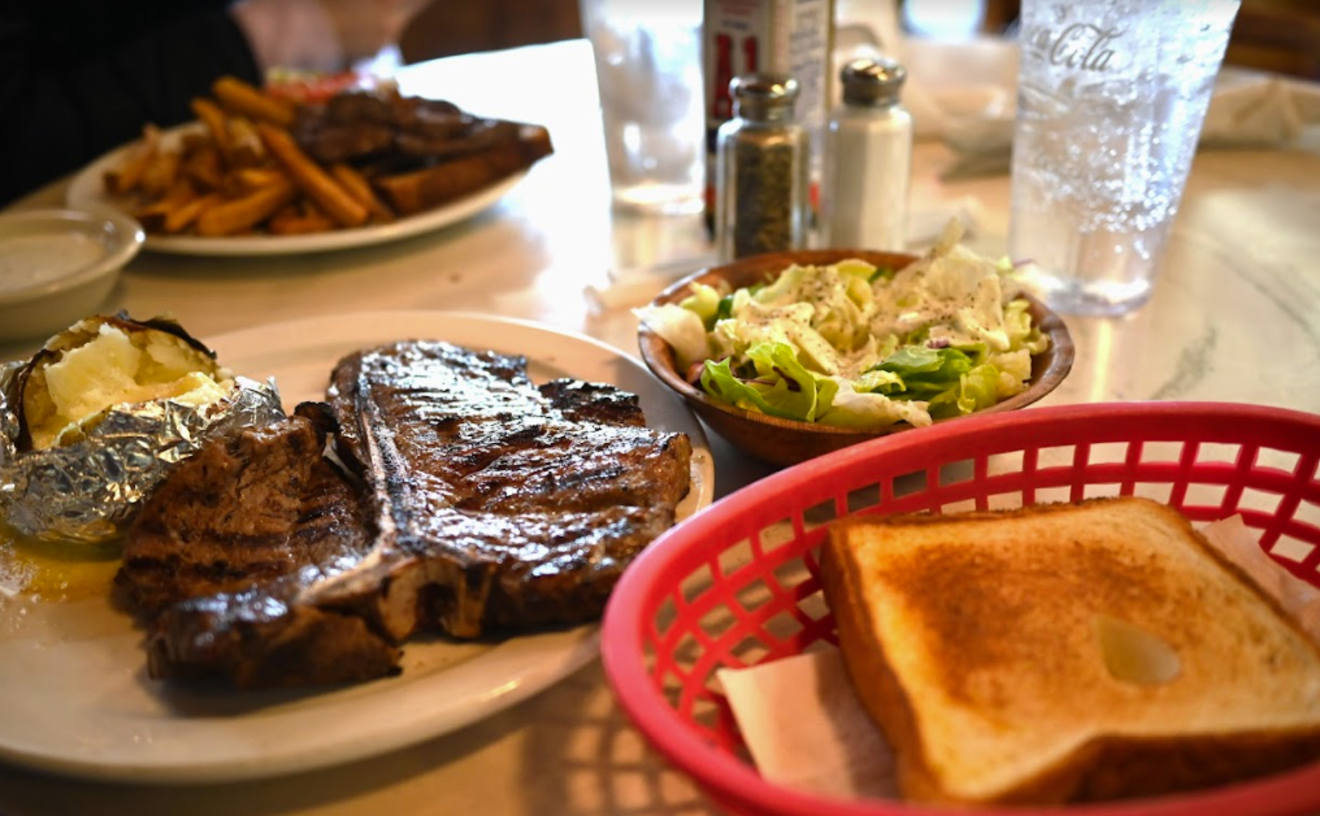 At night, the low-slung roof and garish yellow sign of the Columbine Steak House beckon like an Edward Hopper painting, though perhaps without the pervading sense of loneliness. Through the window, passersby on Federal Boulevard can witness a throng of waiting diners, often spilling out the front door, queued up to order a steak from the grill man as flames leap behind him. The steaks are simple and cheap, kissed by fire, leaking fat and blood, flecked with a touch of salt and pepper. Columbine has been serving steaks for more than a half-century, and what you'll get on your plate is exactly what your parents and grandparents would have gotten here. The diner side is strictly no-nonsense — just pay and eat and make room for newcomers. At the bar, the pace is a little more relaxed; just don't ask for anything too fancy (meaning anything with more than two ingredients) or you'll be met with suspicion. Bring cash and leave the coat and tie at home.