Ten Best Strains Through the First Half of 2020 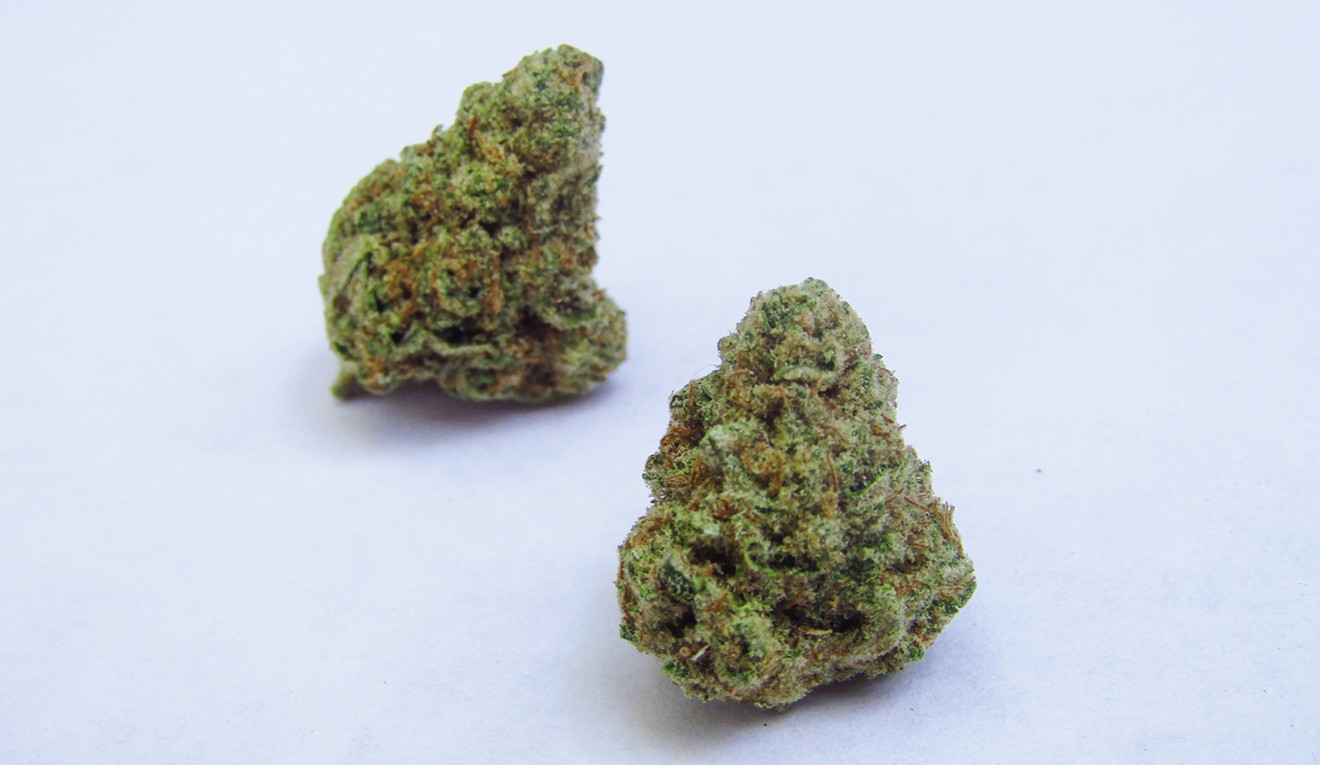 Mac and Cheese: comfort food, buddy-cop sitcom, or potent weed hybrid? Herbert Fuego
If you've found yourself smoking a little more weed than usual this year, you're not alone. We're not condoning overindulgence, but 2020 has done a great job of stressing us out and limiting our recreational options — besides recreational cannabis, which is now an essential business in Colorado and the majority of states with legal pot.

Even during a pandemic, Denver boasts a virtually unlimited supply of new weed options, with dispensaries offering just about every flavor, smell and effect on the spectrum. Lucky enough to try a new variety every week, I've picked out ten of my favorite strains (listed below in no particular order) through the first half of a very toke-heavy year. Bazookies
Herbert Fuego
Bazookies
Bazookies isn’t named after the giant à la mode cookie sliced like a pizza (that’s a pizookie), nor is it the same as Zookies, a mix of Animal Cookies and Gorilla Glue #4. No, Bazookies is a hybrid of Bubblegum and Girl Scout Cookies, in which old and new genetics meld into a relaxing yet productive high that works almost any time of day. Bred by Klone Colorado, Bazookies is a strapping young plant popping up at wholesale grows, clone stores and pot shops along the Front Range. While I still lament the lack of classic Bubblegum available at Denver dispensaries these days — the sweet, chalky Kush flavor seems to be outdated for today’s pot industry — I was happy to take one of its children for a spin. After a tolerance break for a week and some early hesitation about the smell, I found that Bazookies did not disappoint.

My runs with Bazookies have all smelled too grassy at first, probably because the three stores I’ve bought it from all stored the strain in large jars (which can also increase microbial growth, so maybe it’s time to reconsider that method). But after a couple of days on their own, my eighths of Bazookies have turned into a scrumptious weed salad of apples, tomatoes and greens. The smell and flavor make me feel as if I’ve just had a light lunch, and so does the high, which toes the line just enough to relax the brain while keeping creativity and motivation intact. That calmness can peter out eventually, though, so go slow if using Bazookies in the morning or mid-day, and keep its creative stimulation in mind when toking before bed. Citral Flo
Herbert Fuego
Citral Flo
Citral Flo smells, looks and smokes like some of that classic mystery dank — only we know what it is. A cross of Sour Flo and Citral Skunk, Citral Flo’s throwback smell and flavor are almost like going back to a hometown hangout. It doesn’t take long to trace the strain back to Flo, Citral, Skunk, Sour Diesel and OG Kush on the family tree, and those genetics combine for a beautiful blend of Eastern and Western cannabis varieties. Thick, chalky flavors of Hindu Kush, rubbery, gassy hints of Diesel, heavy fumes of Skunk and a twist of citrus cooperate instead of clash, creating a smell that’s textbook sticky-icky.

Citral Flo’s high tends to lean old-school, too, and can make users anxious if too much is toked. Smoking a joint of it made me feel like a youngster on his first blunt: My tongue felt like sandpaper, and my sense of time and concentration were disoriented. However, sessions of the strain before a late February bike ride and during mountain visits gave me a warming energy without the side effect of overthinking, making it great for quick decision-making during outdoor activity. Mac and Cheese
Herbert Fuego
Mac and Cheese
Mac and Cheese is reportedly a creation of Capulator, the breeder responsible for MAC (Miracle Alien Cookies), which was mixed with Alien Cheese to create what we're smoking today. The strain's genetics, known more for potency than user focus, seemed like the definition of a comfort strain: something that gets me giggly and baked without the side effects of paranoia or extreme lethargy. Such strains generally result in a day spent on the couch, allowing just enough energy to reheat a mixture of leftovers or pay the pizza guy. Does that make me a lazy pile? You betcha, but Mac and Cheese still leaves me just enough motivation to spring into action for a surprise pickup game.

The sign of a true comfort strain is lack of guilt. Sitting on my ass all day brings more self-hatred as I get older, and the need for stress relief during those trying mental times is essential. Mac and Cheese was too successful at that, though, erasing any shits to give for the next six hours. That's the sign of a dangerous strain any time of day, so keep that in mind before lighting up to take on your to-do list. But if you're only trying to watch explosions and choreographed fighting all day, another bowl of Cheesy Mac won't hurt. Citrus Farmer
Herbert Fuego
Citrus Farmer
Citrus Farmer, a potent hybrid from northern California, is good for a quick puff of second wind when the work is done. It's good for a huff of second wind, too, because the punch of wet earth and squeezed citrus that each bud emits qualifies as doldrums aromatherapy. In fact, I enjoyed my first frisky run with Citrus Farmer so much that I then bought an ounce of it, but quickly found out that dipping into the jar throughout the day led to the foggiest brain I've had in weeks. Forget about trying to remember what day it is: I couldn't even remember which toothbrush was mine. Honestly, I'm proud of myself for having the drive to even try.

As with any long-term relationship — and that's what buying an ounce is, for most of us — figuring out my expectations and pace with Citrus Farmer helped me find the balance I needed. While that fresh-squeezed smell of orange or grapefruit juice can be enjoyed and even beneficial in the morning, an extra glass of sugar and acid gets internally disruptive as we get older. I'm consistently two steps behind if I smoke Citrus Farmer all day, but one step blissfully ahead if I keep it limited to one bowl mid- to late morning.

Ice Cream Cake
Herbert Fuego
Ice Cream Cake
A mix of Wedding Cake and Gelato #33 from Seed Junky Genetics, Ice Cream Cake carries a long lineage of Girl Scout Cookies, Durban Poison and Kush hybrids and phenotypes. The strain is a poster child for what a modern flower connoisseur wants, covered in a thick, sticky layer of resin like a powdered doughnut, with sweet, creamy notes of vanilla, dough and hash to boot.

Ice Cream Cake has quickly become a top-shelf strain in Denver, but achieving staying power can be hard for Cookies and Cake strains, which tend to cannibalize themselves. Ice Cream Cake's parents, Gelato and Wedding Cake, were hot two or three years ago; although both are still around, they don't stand out like they used to, with Ice Cream Cake and similar strains stealing their luster. Will Ice Cream Cake be able to hold its place among the Sour Diesels and Gorilla Glues of the world for the next couple of years? Time will tell, but it's off to a sweet start.