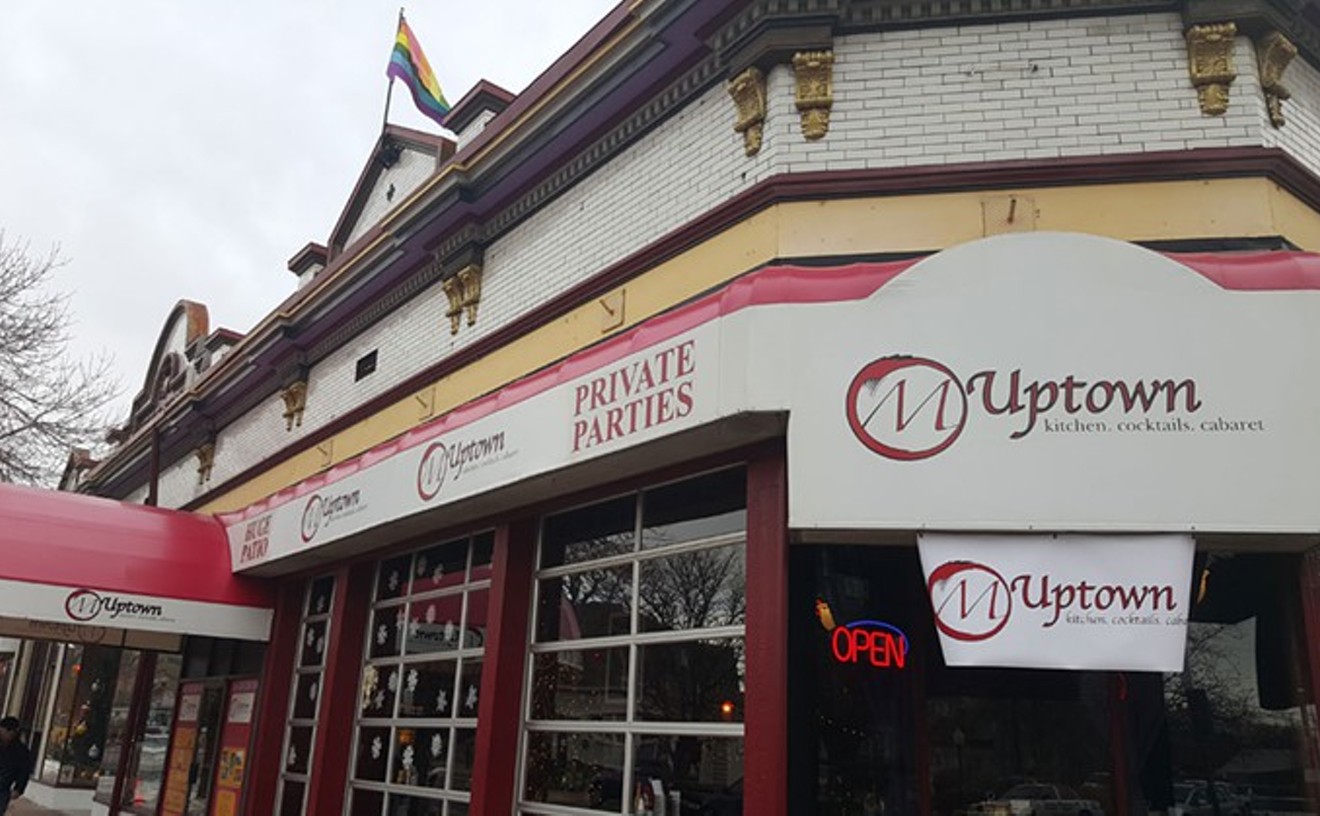 Since its start as the annual signature fundraiser for the Colorado Gay Volleyball Association four years ago, the Queen of Aces pageant has grown into an entity all its own. For a chance to win a sparkling crown and carry out do-good missions throughout the year, this old-fashioned drag blowout attracts contestants of all impersonation skill levels. The costumes may be imperfect and the talent and lip-syncing portions of the pageant a little lopsided, but each queen gives it her all — and the audience applauds the effort.

Steven Cole Hughes
Is He Dead?

Steven Cole Hughes played Millet in Is He Dead?, a Creede Repertory production presented at the Arvada Center, but he spent most of his time in drag as Daisy — and he did it deliciously. Despite the frilly dress and golden wig, he avoided the usual mincing walk, smeary clown lipstick and high-pitched giggle. Millet-Daisy was earnest and bemused, and trying desperately to remember her backstory — whether she was married, for example, and how many children she had. Eventually, surrounded by suitors offering jewelry, she began to relax and enjoy the power of the skirt. Best of all was her drawn-out, coltish, rocking attempt at a curtsy, which had the audience almost puking with laughter.

With the emergence of dubstep — sometimes falsely referred to as "fast drum and bass" — other EDM genres have taken a side seat. The tried-and-true plate-traders at Recon don't subscribe to this. Recon DNB has maintained prominence in Denver by bringing real drum-and-bass to the people who know and love it. Whether you find yourself in the dampest of underground clubs or in the spotlight at the hottest dance venue, it's likely that Recon DNB is responsible for bringing the producer who's pumping out tracks at 180 BPM, thus forcing you to dance your ass off.

Being plugged into the local dubstep scene is one thing, but having your finger on the pulse internationally is a whole other feat. The Sub.Mission crew has done just that by bringing the biggest names in the burgeoning genre stateside for half a dozen years now. Utilizing their in-depth knowledge of the dubstep scene, the folks at Sub.Mission have opened the eyes of newcomers and faithful dubsteppers to established U.K. talent as well as newer faces in the local scene. You may not like all of the music that's being churned out of the mainstream EDM mill, but you can be sure that when you see the Sub.Mission name on a flier or an event, the music will be pure and the talent will be top-notch.

It's been a banner year for electronic music in Denver — after all, the metro area is home to Communikey and the Great American Techno Festival, so we've grown to expect headliners that should make EDM fans in many larger metropolitan areas green with envy. But Afterhours Anonymous produced consistently amazing shows throughout the year, bringing in internationally renowned DJs and producers like Radio Slave, Chris Liebing, Max Cooper and Pan-Pot, who set local dance floors aflame with their sets. AA producers even landed a stage showcasing top-notch EDM acts at the massive Global Dance Festival rave at Red Rocks — and they're keeping the momentum going in 2013, with Maya Jane Coles lined up for a 4/20 show at NORAD (named one of Rolling Stone's 25 DJs Who Rule the Earth, Coles is flying out in between Coachella slots) and big plans for this year's Global stage. We can't help being addicted to Afterhours Anonymous.

The people bringing DJs and producers to town have gone above and beyond during the past year, proving that you can put a city that's not on either coast on the international map if you play your cards right. In a year of music that also included such artists as legendary techno superstar Chris Liebing and illustrious underground names Rrose and Radio Slave, it was a tough call to pick Pan-Pot, but there are two primary reasons that the group's set at NORAD (and the surprise showcase at the after-party at Cluster Studios) beat out the competition: The crowd ate up the Berlin duo's blend of tech-house, dancing furiously with ear-to-ear grins the entire time; and the members of Pan-Pot had an equally fine time, saying that this was the best show they'd played stateside. No one who was lucky enough to be present will forget this one for a long time. Talk about positive energy!

You wouldn't think a Tuesday night would be the hottest night for finding fresh music, but when Nicole Cacciavillano and her team got ahold of it over a year ago, it quickly gained popularity. Sub.Mission has garnered an unprecedented Tuesday following for new talent in Colorado at Cervantes'. Hosting producer competitions, battles and the occasional headliner (in the past, we've seen the likes of Caspa, Netsky and Sub.Mission's own residents), Cacciavillano and crew prove that no matter what you've got going on during the week, there's always time for fresh new beats. Tuesday nights at Cervantes' are filled with hard-hitting bass lines and complex layers of production from tomorrow's biggest names.

John Ashton, Warren Sherill, Steef Sealy, Brock Benson and Kevin Hart all gave fine individual performances in Conor McPherson's The Seafarer, a play about two drink-sodden Irish brothers, their friends, and the enigmatic figure who shows up for a game of cards. But these performances — the bullying, the silences, the moments of meanness, misery or amnesia — also meshed to create a mesmerizing world in this Ashton Entertainment production, a world murky with booze, despair and even menace, but one that showed a flickering hint of tenderness and light.

Hosting several shows a year that emphasize its family-friendly nature, the Mile High Freedom Band provides a festive party alternative for kids and adults alike on holidays ranging from Halloween to St. Patrick's Day to Martin Luther King Day to Pride. Comprising a full concert band, a marching band, a swing band and smaller ensembles, the GLBTQ-inclusive group works with both seasoned musicians and instrument newcomers to provide all-ages entertainment. And the applause is nationwide: This year the group was chosen from hundreds of marching bands to participate in the 2013 presidential Inauguration Day parade.

It takes guts to say you're going to launch a new major comic convention — but even more, it takes faith, the faint promise of funding, and maybe a wing and a prayer. Still, Comic Book Classroom, a non-profit program that teaches literacy to kids through comics, pushed forward with the first annual Denver Comic Con last June, and the results were fantastic. The convention drew thousands of comic fans, cosplayers and wannabe superheroes to the Colorado Convention Center. And there's nowhere to go but up this year: The guests, who include Marvel maven Stan Lee and pop-culture hero George Takei, are still being announced, and they're stellar. It's enough to bring out the man of steel in everyone.