The long-awaited Alamo Drafthouse just made its Colorado debut at Aspen Grove, but its fun-loving movie-party reputation precedes it. One big part of the Alamo formula is the food: a full menu of burgers, pizzas, salads, sandwiches and brunch items that brings home-style amenities to the movie-going experience. And fueling up at the Alamo is no problem: You can choose from many wines and an extensive beer list, with an emphasis on Colorado craft brews; there's also a full lineup of adult shakes, including the Left Hand Milk Stout Shake and a Mexican chocolate version shot through with reposado tequila. And, yes, you can enjoy bottomless popcorn, too, with or without real melted butter — or, for a buck more, a side of herbed parmesan to sprinkle. Want an even homier snack? Order up a baked-to-order warm cookie and a pot of hot chocolate. Whichever way you go, it will be nearly impossible to go hungry during your Big Lebowski quote-along or Oskar Blues Dinner screening of The Jerk at the Alamo.

Sie FilmCenter programmer Keith Garcia wears his film fanaticism in a bright splash right on his sleeve, and his constituents love him for it — because he's one of them. Thanks to Garcia, the Sie's schedule pairs the best in current indie and art films with more esoteric sidesteps into anime and animation, documentaries and genre films he books for his pet late-night project, the Watching Hour. And the Sie always plays to its audience when it specializes, making film-going into a party with a movie as the entree, whether it's marketed to anime-loving cosplayers or the sophisticated film-festival crowd. For all-around diversity, quality and unexpected quirks, the Sie puts it together best.

The Denver Art Museum has really stepped up its game since the Hamilton Building came on line, giving the facility more space and allowing director Christoph Heinrich to turn the place into an exhibition-driven destination. The homegrown blockbuster Becoming van Gogh was a perfect example: The museum stayed open around the clock at the end of its run to accommodate the crowds. For this show, the DAM's Gates Foundation Curator of Painting and Sculpture, Timothy Standring, compellingly recast van Gogh as an artist who was at one with his times rather than a madman who stood alone, a common perception. Standring did this by presenting rarely seen pieces showing van Gogh following the same stylistic arc as other artists of the period — first creating dark realist works, then sunny impressionistic ones before he got around to his signature post-impressionism. 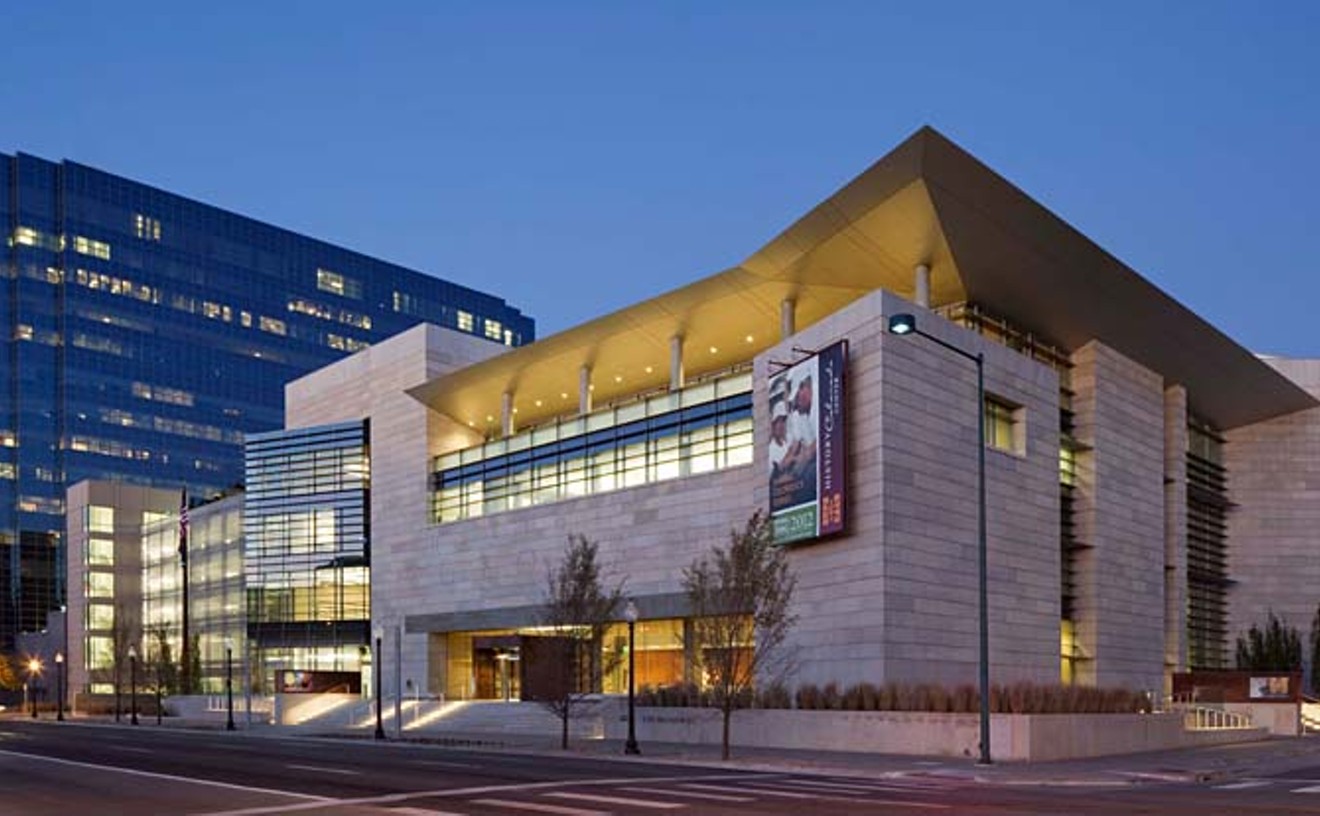 The History Colorado Center has courted controversy with its exhibits, but the powers-that-be at the institution did get a few things right. They commissioned David Tryba to design a spectacular new building — a winner, even before it opened, of a Best of Denver award last year. They also stocked a spacious and handsome gift shop on the main floor, just steps from the front door. The space is filled with books, handmade jewelry and pottery, T-shirts and more, and together this inventory (some of it actually made in Colorado) reflects the cultural, ethnic and racial characteristics of the Centennial State. Best of all, you don't have to pay museum admission to just go inside and shop.

Nick Guarino, founder and owner of ThisSongIsSick.com, didn't expect his obsession with music to take off the way that it did. After attending the University of Colorado at Boulder for a couple of years, Guarino found himself at a crossroads: continue higher education, or press on with the blog. Like any smart entrepreneur, he followed his passion, and as a result, his humble blog has become a multimillion-hits-per-month juggernaut, paving the way for the creation of a record label and a handful of successful productions, including a debut sell-out event with Big Gigantic, Macklemore and Ryan Lewis, Dillon Francis, GRiZ and Raw Russ that closes out the 2012 season at Red Rocks. With regular posts featuring new-music submissions from all over the world, ThisSongIsSick is the go-to source for EDM-philes in search of a new artist, a new beat, or just an influx of fresh dance tunes for the playlist.

When a small dinner theater decides to take on a huge, glitzy Broadway show featuring dozens of tapping feet, it's asking for trouble. Where will the director find all those triple-threat performers, the people who can sing, dance and act equally well? For 42nd Street, Michael J. Duran enlisted the help of talented Boulder's Dinner Theatre regulars, mixed in a slew of young people — including one who'd performed for the company as a child — and found Johnny Stewart, a business student at CU who can tap along with the best of them. Combine this cast with the theater's usual first-rate tech and Neal Dunfee's excellent small orchestra, and you've got all the glitter and glam of a Broadway show — but with a lot more intimacy and heart.

A weird mix of Confessions of a Dangerous Mind and The Tonight Show, the Denver-centric variety show Late Night Denver has a bit of an intentionally awkward, surrealistic vibe. But that just adds a bizarre classiness to a program that, in another era, would merely have been a well-produced cable-access show. Hosted by John Rumley, of Urban Leash and Slim Cessna's Auto Club fame, and Heather Dalton, familiar from her stints on Teletunes and in the punk band the Pin Downs, this long-overdue show includes interviews with local underground music celebrities like Richard Groskopf (Boss 302, The Agency), Lisa Cook (The Emmas) and Magic Cyclops. The connecting sketches are as irreverently and darkly self-effacing as an inside joke. Visually rich, smart and clever without being smug, this series is an affectionate peek into Denver's underground music scene.

With the constant influx of great new bands that flood the scene every year, it's tough to pick the best of them. But the Dirty Few made that task infinitely easier this year. The trio makes the kind of fun, no-frills, boisterous, beer-can-foisting rock that you thought didn't exist anymore. The bouncy bombast could inspire even the most bashful of wallflowers to spring up and raise their fists without a moment's hesitation. And while the music itself is 100 percent pure exuberance, the group's live shows are even more energetic and engaging. Get Loose Have Fun is the act's debut album title — and motto — but it also describes the attitude adjustment you'll experience after a dose of the Dirty Few.

See also: A look at the last decade of Best New Band winners

The Drowned Cities, by Paolo Bacigalupi

After racking up awards — Nebula and Hugo honors for Best Novel — for his debut book, The Windup Girl, Paolo Bacigalupi followed up with Ship Breaker, set in an equally dismal, dystopian future, and won another round of awards, including a National Book Award nomination and a Printz Award for Best Young Adult Novel. The latest from the Paonia-based writer, The Drowned Cities, hit bookshelves last May. It was originally supposed to be a direct sequel to Ship Breaker, following its lead character, Nailer, but instead turned into a "companion" to that book. "I started really thinking about what it was that was important to me to be writing about," he told us last spring. "There was a single line from the original draft of that book that still resonated with me: Nailer and his compatriots had been sailing past this wrecked place of perpetual war called the Drowned Cities, and Nailer asks, 'How did the Drowned Cities get this way?' The captain of the ship says something like, 'A nation as strong as this one doesn't just fall apart. It has to be deliberately destroyed.... The demagogues just whipped up the people and the people bit on their own tails, and they chewed and they chewed until there was nothing left but the snapping of teeth.'" Bacigalupi bit off plenty with this book, but he delivered.

During the twentieth century in Denver, typically only one building was constructed each decade in the greater Civic Center area. That's changed, though, and since 2000, we've seen no fewer than eight new landmarks. Add to this exalted group the Denver Police Crime Laboratory, designed by the Durant Smith Group. Though relatively small in size, it's big in visual appeal, with folded plate walls zigzagging and cantilevering out above the ground, all carried out in mirrored glass, masonry and panels. And although the designers showed a clever disregard for symmetry, they gave the building a spectacular sense of balance. Only employees can get inside the crime laboratory, which is too bad, because a pair of impressive suspension sculptures, "Suspect" (which can be seen through the windows on West 14th Avenue) and "Bullet," both by Cliff Garten, have been hung above the main floor.