Best Performance in a Variety Show

Kelly Tobin's appearance in Vox Phamalia: Quadrapalooza made you question the essential meaning of art, and the line between acting and simply existing — with revelatory truthfulness — on a stage. As part of this series of skits and songs about disability, Tobin stood on stage to tell you about hers. She had a lovely, spunky, warm presence, but you could see that talking about her life was hard; at one point she forgot what she was saying for a few moments, because in addition to truncated limbs, she has suffered a traumatic brain injury. But she told a wonderful story about deciding to save a doomed foot in formaldehyde after amputation — complete with the three toenails she and her two daughters had defiantly painted in different colors — and keeping it under the bed. You could have clustered her account with those crazy-inspirational stories about women who tattoo the spaces left on their chests after a mastectomy, or show up for chemo in sassy, sky-high heels, but her performance wasn't show-offy that way. It didn't make you think that Tobin was braver than anyone else, or funnier, or more colorful. You didn't say to yourself, "Oh, isn't she wonderful? Look at how she can laugh despite all she's been through." Though her warm, melodious voice never faltered, she made it clear that nail polish doesn't begin to assuage the shock and sadness of amputation. What she gave us in the end was life straightforward and unadorned, and the understanding that hers was the human condition — just as surely as your own.

A magnificent traveling show at the Denver Art Museum, Robert Adams: The Place We Live provided an in-depth look at one of the most important artists associated with Colorado. In the '60s and '70s, Adams revolutionized photography by depicting the local landscape. His shots of the breathtaking Colorado scenery also captured the tract houses and trailer parks set incongruously, and disturbingly, in the middle of it, exposing the rape of the environment — a favorite topic for Adams, and the one that guaranteed his fame. The show was put together by Yale University Gallery's Joshua Chuang and Jock Reynolds and tweaked for its Denver stop by the DAM's photo curator, Eric Paddock. Despite his politically charged subjects, Adams also imbued his work with an old-fashioned beauty that paid homage to the great landscape photographers of the nineteenth century, through his sense for composition, his intimate scale, and the high quality of his prints.

In just a week, Girls Rock Denver turns girls ages eight to eighteen into rock stars. The local organization formed in 2007 as part of the national Girls Rock Camp Alliance, and ever since, it has been putting on an annual week-long summer camp where aspiring rock goddesses learn how to play instruments, form bands and then perform before a crowd of adoring fans. Last year's showcase marked the debut of such camper bands as Rockin' Funky Donuts, the Heartless Doves of War and Purple Lipstick, playing hits like "Cross Out the Boys" and "Rainbow of Death." By empowering females through music, Girls Rock Denver shows there's a place for those little ladies more into Bratmobile than Bratz dolls.

To say that Cervantes' is a clubhouse would be using a loose tongue, but to say that it's the meeting point for all local talent would be totally spot-on. There's a show here almost every night, and you'll find local DJs mingling in the Ballroom or over on the Other Side, sipping drinks, sharing music or just taking in the scene. It's nice to see so much talent congregate in one room and get along: The sense of community in the local DJ scene borders on family ties, and the vibe at Cervantes' is refreshing.

Women of the World Poetry Slam

Denver not only boasts the 2011 national champion slam-poetry team, Slam Nuba, but in March the city hosted its largest poetry event to date: the Women of the World Poetry Slam. And then a local won it: Longtime poet and 37-year-old mother of four Dominique Ashaheed, a member of the Slam Nuba team, held on to the first-place slot through all three days of competition. She finally took the title with "For Emmett Till," a piece that related her ancestral history while also telling of the 1955 lynching death of a fourteen-year-old African-American boy. Being home to two national champions as well as host of the successful Women of the World event puts Denver squarely in line to host the national slam championship in the near future. Word. 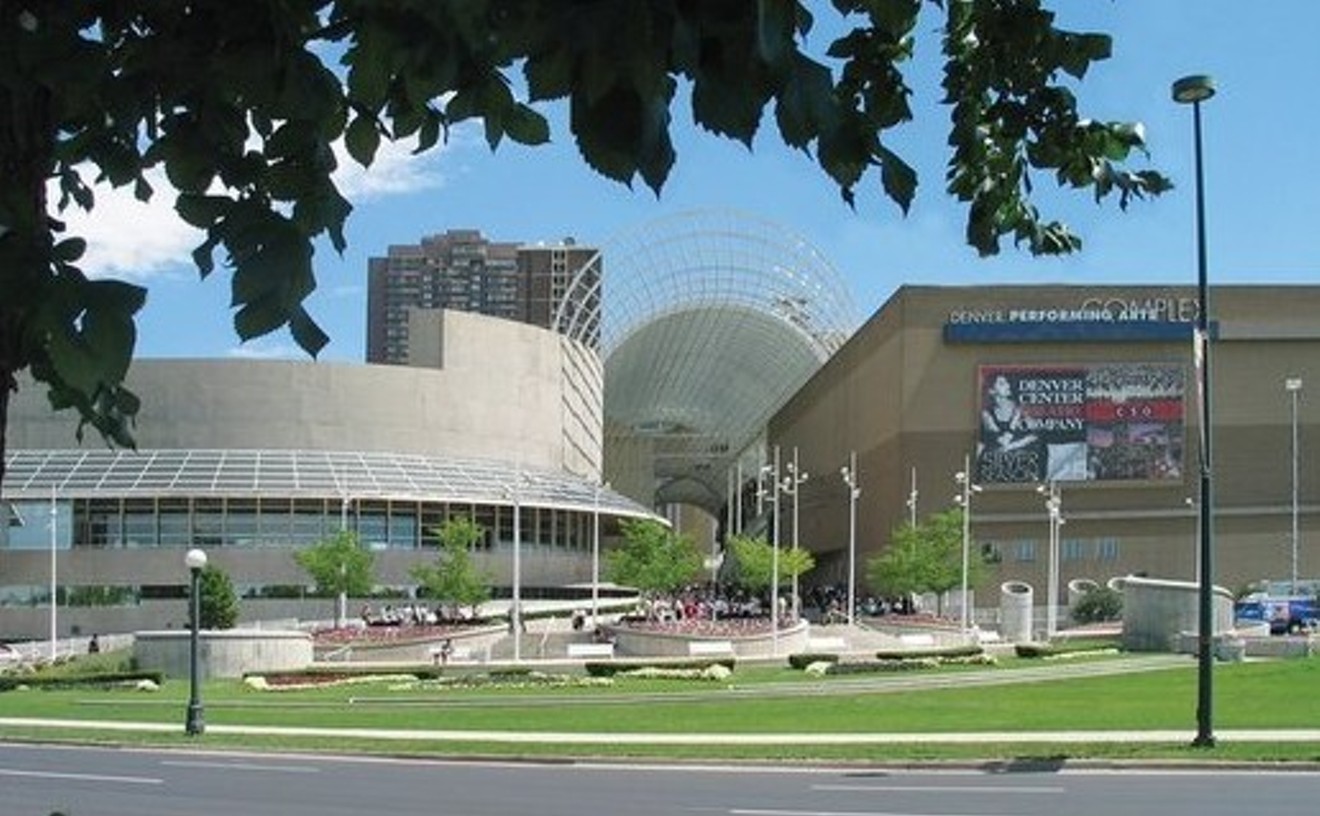 When Samuel D. Hunter's The Whale was read at the Denver Center Theatre Company's New Play Summit in 2011, we all wondered how a work that centered on a morbidly obese man slowly dying while anchored to his couch would fare in full production — and the production mounted by the DCTC this season laid all those concerns to rest. While Charlie's world is static, the action is essentially emotional and metaphoric rather than physical. He may be anchored to his couch, but he's visited by several people: a friend who's determined to try to help him, a nineteen-year-old Mormon, his ex-wife and — most important — the estranged daughter with whom he's determined to make some kind of connection. Well-cast and -directed, this premiere illuminated the profound half-submerged contours of The Whale and illuminated its large-spirited gentleness.

Fallene, Fallene, Fallene — where have you been all our lives? We like to think that Fallene Wells's big year actually got its start in 2010, when we named her to the sixth annual MasterMind class, but though the multi-talented fashion designer, hair stylist and fashion-show promoter was already a big thinker, the best was yet to come. In 2011, Wells, who'd been thwarted in her first attempt to compete on Lifetime's Project Runway, tried again and was chosen as a competitor for PR's ninth season. And if her run on that show was short, it was definitely auspicious. Cute as a button and exuding a style all her own, Wells is now in demand in everywhere — from her lower stratum as a hairdresser to her powerhouse capacity as the sole machine behind Forever Darling, a runway benefit she's planned and run since 2008. And this year's event, which happens at the end of March, is the biggest yet, produced in tandem with the Denver Art Museum's Yves Saint Laurent blockbuster and boasting a design pool of fellow Project Runway couturiers. And in the midst of planning it, Fallene not only dreamed up a new fall 2012 clothing line, to be created right here in Denver by a local clothing production team, but also launched a $20,000 Kickstarter campaign to finance it — and more than made her goal. If that all sounds like a fairy tale, the happy ending isn't over yet: For Fallene Wells, the fun could be just beginning.

Best Production of a Comedy

American Night tells the story of immigrants in America through a crazed mix of skits, historical references, inspired parody and moments of pathos and insight. As the play opens, the protagonist is studying for his citizenship test, and as he reads, a phantasmagoric tapestry of historical events unfolds. He witnesses the signing of the Treaty of Guadalupe Hidalgo in 1848 — under which huge swaths of Mexico's land were lost to the United States — and runs into such figures as Malcolm X and Arizona sheriff Joe Arpaio. He gives Sacagawea, the Native American woman who accompanied Lewis and Clark on their voyage, a bright-green pair of Nikes and advises her to "just do it." The play explores the evils of racism with serious intelligence and irrepressible high spirits, and the Denver Center Theatre Company's joyous, driving production was first-rate, from the fluid tech to the balls-out energy of the cast.

Best Production of a Musical

Phantom is different from that Andrew Lloyd Webber behemoth, Phantom of the Opera. It's smaller in scope, stronger on plot and character, and has a more supple score — though the surging emotions and Gothic plot points are all still there. For this production, Boulder's Dinner Theatre fielded two leads with terrific voices, as well as a stage full of impressively skilled performers in smaller roles. By now the company has its tech down pat, which meant a cunningly contrived set and elegant costumes. The direction — pacing, focus, balance — was top-notch, too. And the sound, as always, was crisp and professional: Neal Dunfee's orchestra has been an unsung (no pun intended) gift to this company for many years. 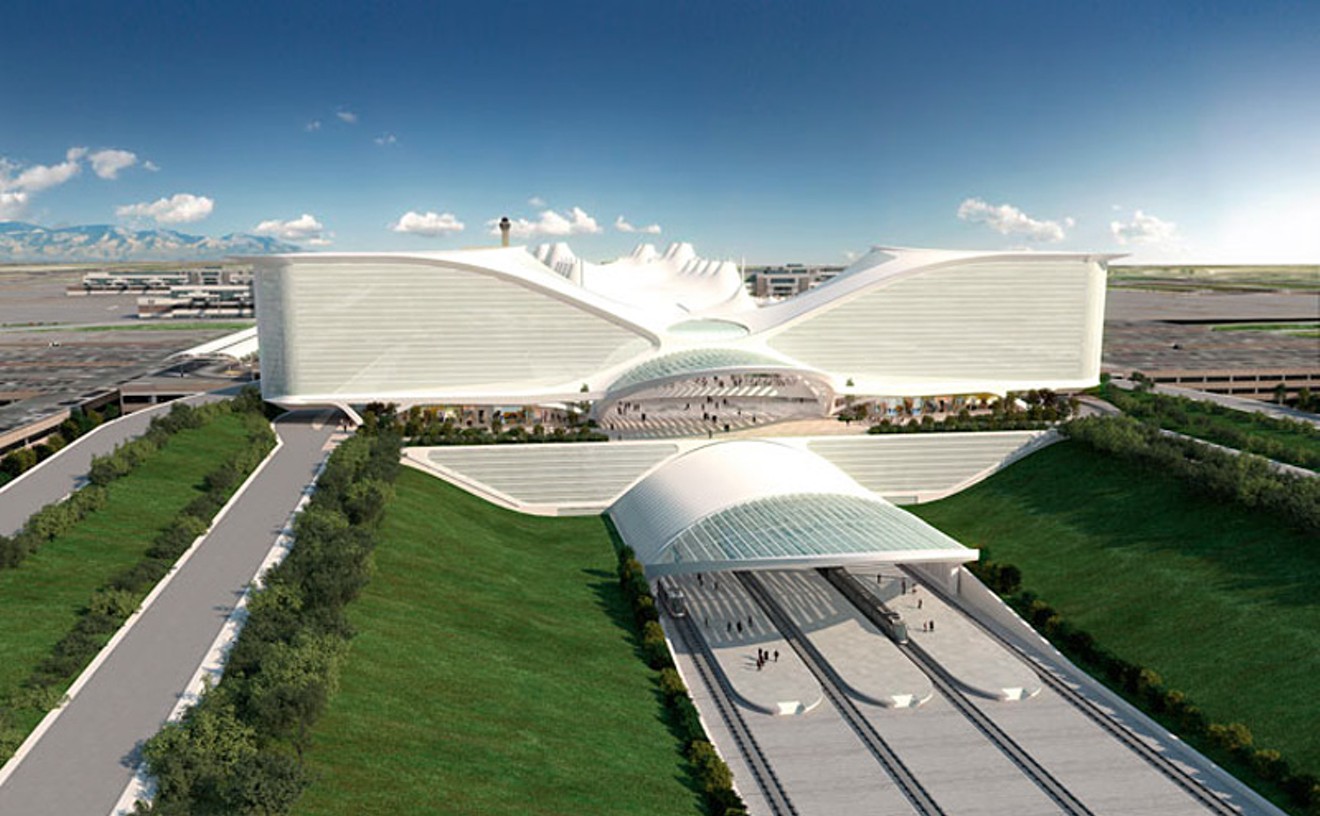 The creation of "Mustang," Luis Jimenez's 32-foot-tall rearing stallion in blue painted fiberglass, has all the elements of a good movie: Mature artist gets a major commission and attempts to create his masterpiece, but can't seem to complete it. More than ten years pass, with dueling lawsuits crossing between the artist and his patron, the City and County of Denver. Then, in what would be considered the climax — if later outrageous events didn't eclipse it — the still-under-construction piece falls and kills Jimenez. The sculpture was eventually completed by his studio and erected in 2008 outside the Jeppesen Terminal at Denver International Airport — and that's when the manure really hit the fan. The piece was stung by the slings and arrows of genuine hatred, including a social-media campaign to have it removed; its nostrils, glowing eyes and scrotum were the subjects of obsessive interest. The commotion proved once again that great art can elicit strong emotions; these just weren't the right ones. The haters obviously don't understand (much less appreciate) Jimenez's sophisticated neo-pop work, a combination of the heroic Western sculpture tradition and the sensibility of Chicano low-rider culture — and a perfect symbol for Denver.