"We aim to satisfy the soul and nourish the body," says baker and Moxie founder Andy Clark. The nourishing part of the little Louisville bakery he built inside an old Victorian house comes in the form of rustic bread that ferments naturally (with no yeast added) over several days in the French pain au levain style before being baked to a hearty, crusty finish. Stop in at the bakery in the morning for an expertly made espresso drink and avocado toast or head over for a lunchtime sandwich built on chewy slabs of house bread. And to satisfy your soul, choose something a little more decadent, like buttery, flaky croissants — or even more buttery kouign-amann, which sport the same flaky layers crusted with sugar for one of the most pleasurable treats around, especially if you choose a fruit- or chocolate-filled kouign. Moxie is the perfect combination of Old World baking in a small-town America setting.

After showing off his pie skills at the Post Brewing Company in Lafayette, John Hinman opened Hinman's Bakery, a wholesale outfit that provides Denver restaurants with fresh rolls, breads and desserts. But lovers of good pie don't have to seek out Hinman's products on restaurant menus; they can call the bakery directly to reserve a pie for themselves. Among the fruit-filled wonders that have won baking contests against some of the city's proudest grandmas, Hinman has a bourbon pecan pie that really takes the cake. A perfect crust that holds its shape on the plate while yielding gently between the teeth is loaded with a rich and buttery pecan mixture spiked with bourbon from Denver's own Laws Whiskey House.

For three years, this bright-yellow doughnut shop in Arvada has churned out quality pastries thanks to Peter, "just Peter," the baker, manager and one-man band who owns OMG Donuts with his Texas-dwelling wife. The specialty is a large, yeast-risen model that looks like a pine cone and pulls apart in neat little chunks of sugar-cinnamon goodness. Doughnut lovers should also order one or five of the freshly stuffed jelly doughnuts, a choose-your-own-adventure option that includes raspberry jam, lemon curd, Bavarian cream, peanut butter or vanilla custard. Take them to go or wolf down a doughnut at one of the two sports-themed tables in the tiny store.

Beast + Bottle chef/co-owner Paul Reilly has a way with meat; that much is clear from his dinner menus packed with pork and lamb prime cuts and outstanding offal. Reilly's whole-animal philosophy spills over into brunch, too, served Saturdays and Sundays from 10 a.m. to 2 p.m. And while you can sink your teeth into the likes of smoked trotter confit, corned lamb and B + B's always craveable fig + pig flatbread, more delicate breakfast items — classic French omelets, airy flaxseed waffles, housemade pastries — demonstrates the kitchen's finesse. Anything made with eggs reflects a farm-to-table commitment; Beast + Bottle has its own dedicated egg-laying flock at Cottonwood Creek Farms. Combine that with gracious and cheery service that trickles down from co-owner Aileen Reilly, and you've got a warm and welcoming brunch from a capital crew. 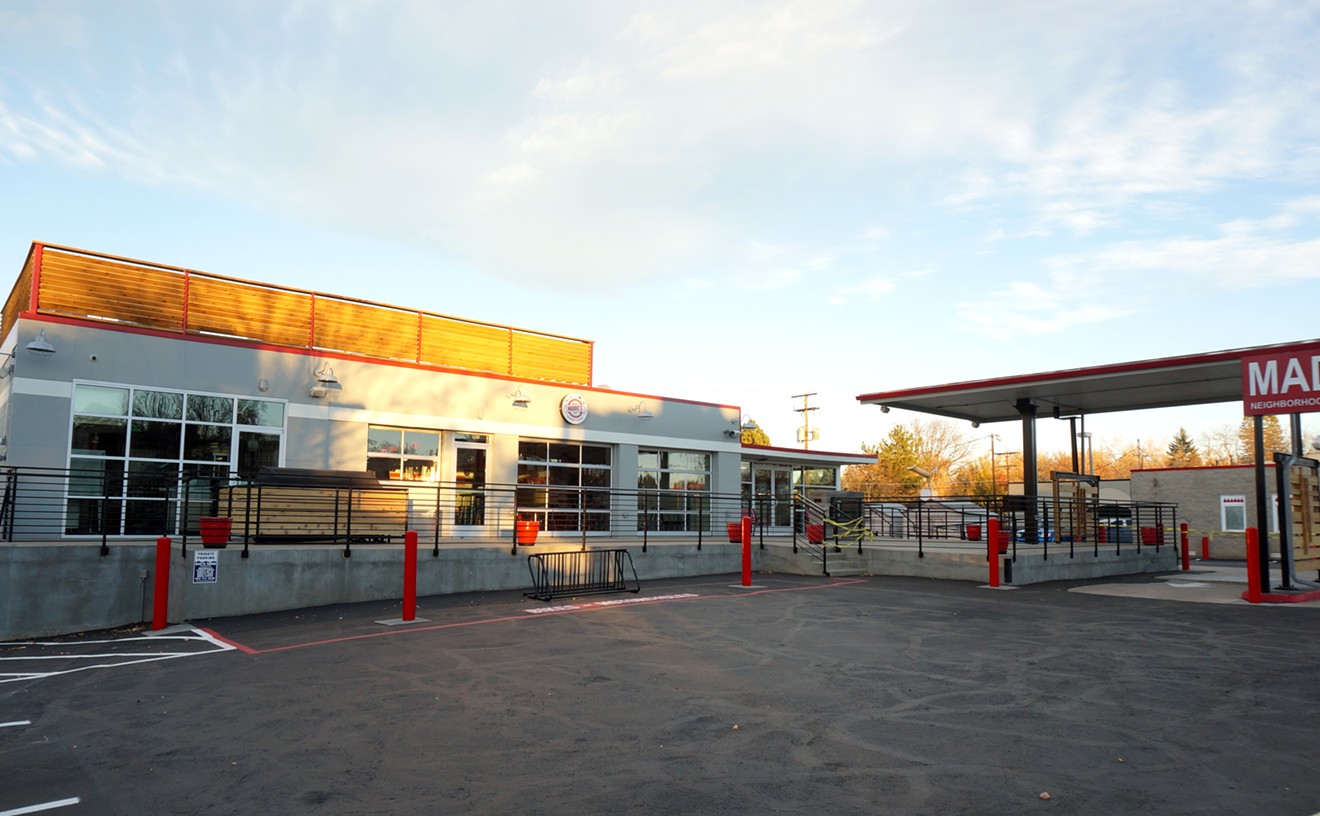 A classic eggs Benedict at Maddie's is like coming home for the Hollandaise. In this brunch-crazed city, where restaurants offer creative takes on every eggy dish under the rising sun, Maddie's stands out for sticking with tradition. Last fall, Maddie's made the move from its original tiny cottage to a big new home next door, built diner-style from the bones of a former service station; the retro digs serve as a good backdrop for a simple but delicious eggs Benedict, veering from the standard formula only by slipping some smoked Gouda between the ham and poached egg. Hollandaise sauce adds a sunny lemon zing, and the whole thing is built on, yes, an English muffin; there's nary a fried polenta cake or wedge of artisan bread to be found. A vegetarian version can be had, too, which swaps out the ham for sauteed veggies. If you're really feeling crazy, there's also a bagel-and-lox Bennie, which is really just a bagel-and-lox sandwich with a poached egg on top. 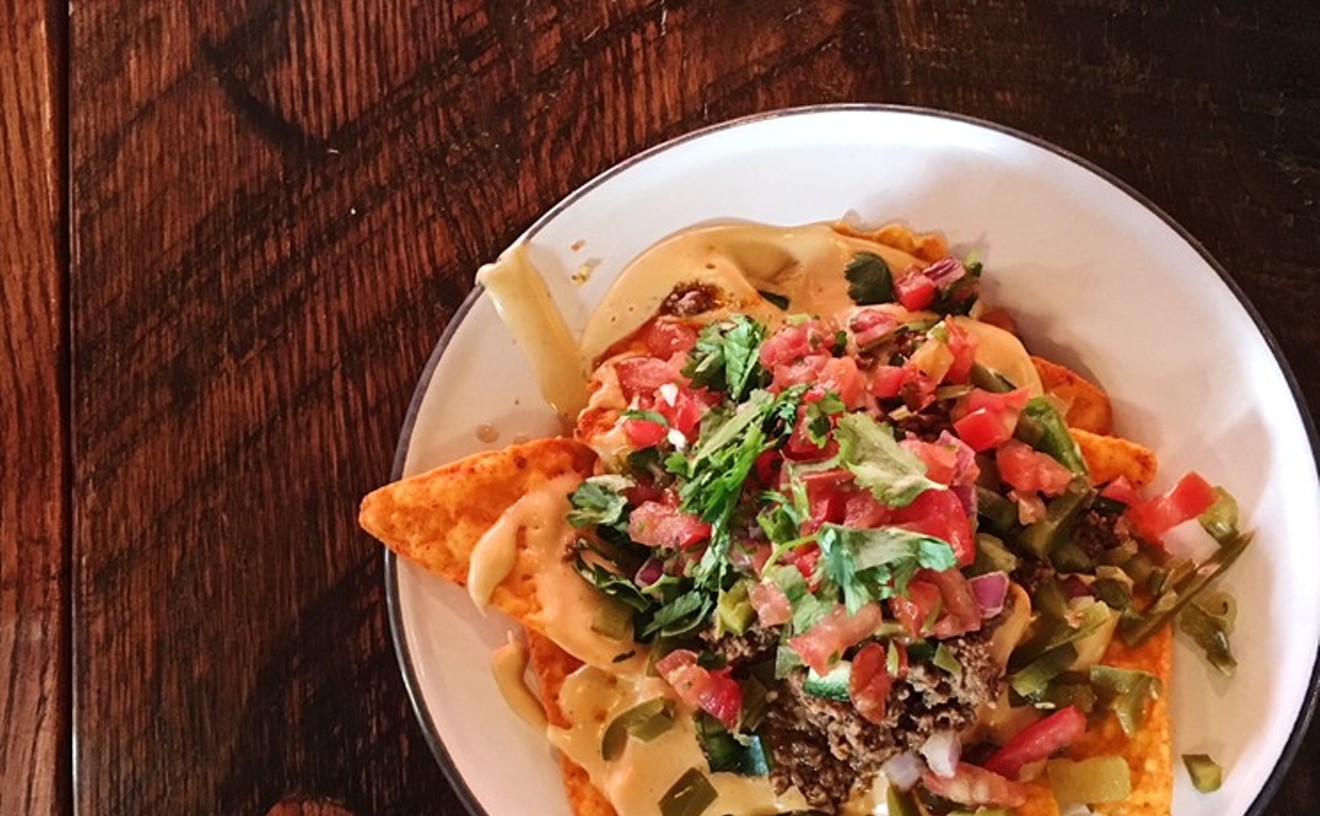 Taco Tuesday is a legitimate draw at many bars around town, Mexican or otherwise. But Cochino Taco throws a wrench into the Taco Tuesday machine by making one of its burgers a special that day. Owner Johnny Ballen, who's also a partner in the Squeaky Bean downtown, designed this gut buster that features a ladleful of queso, poblano chiles, fried jalapeño shards and a pile of "lettuce fluff" — Ballen's catchphrase for the fine-shredded iceberg found on diner burgers across the country. A six-ounce patty gets a simple griddling on the flat-top, and then the whole mess is presented with a haystack of kennebec fries. With something this good on the menu, we're wondering why Ballen didn't name his Englewood joint Cochino Burger.

You know a veggie burger is good when you crave it even knowing how good a burger joint's beefy offering is. That's the case at American Grind, part of the Avanti food hall's rotating lineup of chef-driven projects. The force behind American Grind is the same crew that runs the Way Back in West Highland, and the veggie burger itself came after three years of R & D from co-owner Jared Schwartz. The Veggieburg, as its called on the menu, is made with beets, carrots, sweet potato, chickpeas and chickpea flour, resulting in a texture that's just shy of a meaty chew but still provides plenty of substance. The veggie-and-legume blend packs good, earthy flavor without pretending to be meat and highlights American Grind's commitment to sourcing from regional farms. Don't expect a weak substitute for an all-beef patty here; this Veggieburg stands on its own.

Arcana's menu is long on showstoppers; it reimagines familiar foods with unusual ingredients and innovative flavor combinations. But chef Kyle Mendenhall also knows that in order to truly wow a diner, every bite must sing, from appetizer through dessert, from the meal's focus to the lowly sides. And so his kitchen pays careful attention to things like fries, which accompany a handful of sandwiches on the lunch menu but get no special billing. And these spuds deserve acclaim. Arcana starts with skin-on russet potatoes and cuts them pencil-thin before frying them at two different temperatures — at lower heat to cook them, and at higher heat to crisp them up — and then dusting them with salt. This process, Mendenhall says, ensures that the fries retain a creamy center within a crunchy casing. They're served golden, crispy, salty and hot, and are so good you're likely to power through them and then consider a re-up before you've finished your meal. Give in to the temptation: Arcana sells a side of fries, though it's not listed on the menu.

Chef/owner Justin Brunson knows his pork; the hog, after all, provided the inspiration for the name of his LoHi destination eatery (Old Major was the pig in George Orwell's Animal Farm). But when it came to creating a happy-hour hot dog, Brunson and his team went all-beef — specifically, wagyu from Colorado's 7X Beef. The well-marbled meat of Japanese heritage grinds up nicely in Old Major's dog, resulting in a juicy, savory link that's smoked and served on a homemade roll with a tangy topping of house pickles and condiments. That's more than enough to earn our happy-hour dollars — seven of them for this shapely beast — in a neighborhood rife with deals.

Preston Phillips might be one of the youngest chef/owners in town, but he grew up eating gas-station fried chicken in his home state of Alabama, and he brings that Southern-fried experience to his subterranean Cherry Creek eatery. Grind's bird gets brined and then rested in a buttermilk bath before being fried so that a thick, crunchy coating forms around juicy, silky meat. Each piece comes out a dark reddish-brown, evidence of ample seasonings in the crust, offset by tangy housemade pickles and seasonal sides. In quiet Cherry Creek, the streets now echo with the crunch of Grind's crave-worthy chicken.