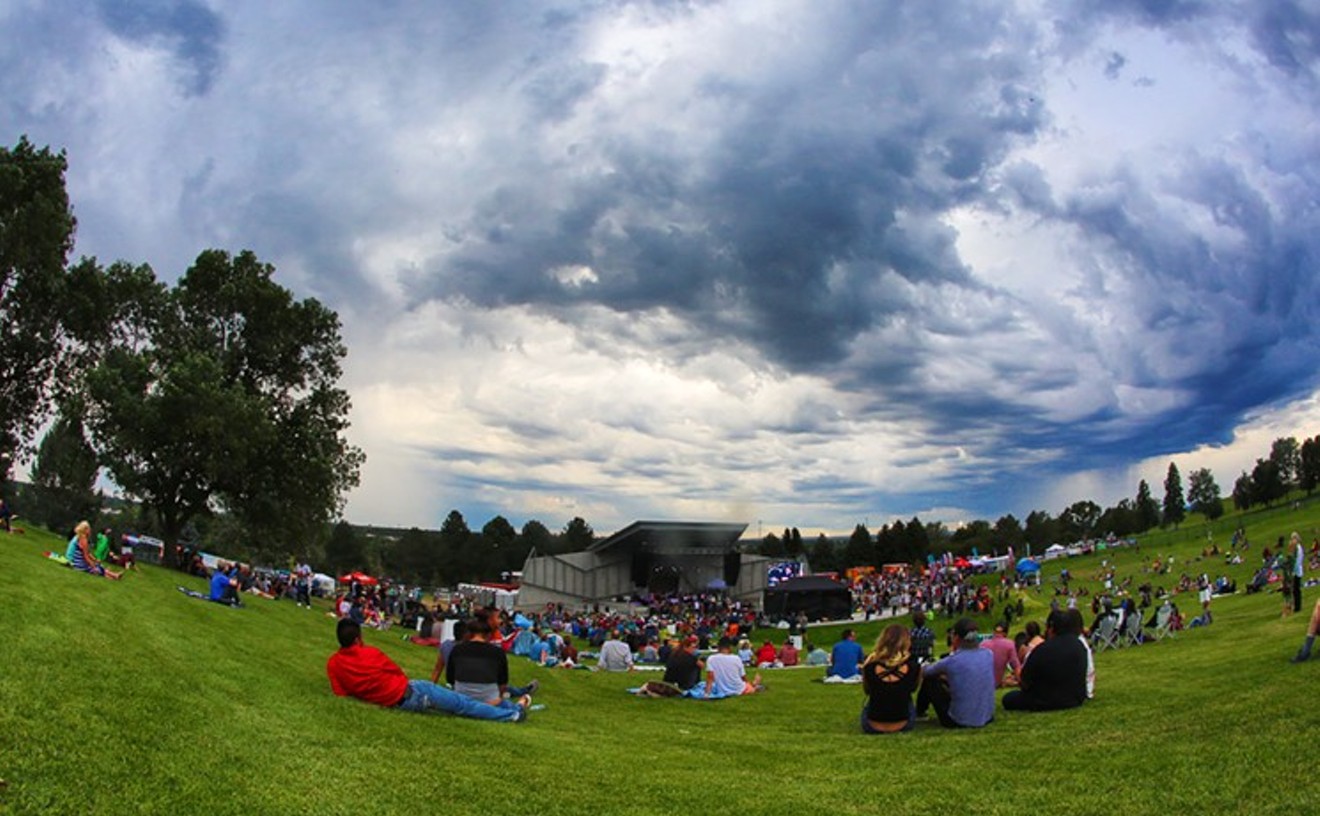 For skeptics, the term "free concert" might conjure up the image of a snoozy evening of nearly unbearable music...but, hey, at least it's outside. But when those naysayers finally get themselves to Denver's Ruby Hill Park to check out one of the fifty free shows offered every summer at the nonprofit Levitt Pavilion, they'll realize they had it all wrong. A Levitt show offers full production: high-quality sound, lighting design and massive projections to bring the audience up close to the action. In addition, the artists showcased by the venue are a who's who of up-and-coming local and touring bands. Chances are they'll soon be among your favorites.

With the arts community in an economic crisis over the past year, cultural groups and artists alike needed somebody to champion them. That somebody was Louise Martorano, executive director of RedLine Contemporary Art Center — an indefatigable advocate who knows how to work with large-scale institutions to bring their resources to often scrappy artists. Creatives in this city looking to get something done — and make it through challenging times — are lucky to have Martorano on their side. Not only does she go to bat for the creative community with the state and foundations, but she's also willing to help artists pull off their wildest ideas.

From Allies to Abolitionists

Jeff Campbell took a creative path to activism — first as a hip-hop artist, then as a playwright and actor. His purpose has always been political, but when Campbell unveiled From Allies to Abolitionists — a challenge to BIPOC allies to stand up vocally and actively for social justice matters — he threw away all artifice and got down to business, picking up the outcry over Denver artist Raverro Stinnett's beating by Allied Universal security guards working for RTD...and getting results. Now the group is addressing city abuse of Denver's homeless community, using a "Message to the Mayor" campaign that includes an all-star hip-hop video. We're looking forward to Campbell's future endeavors.

High-rise construction downtown was largely on a decades-long hiatus until about five years ago, when a boom started that has already resulted in a number of conspicuous additions to the skyline. The newest on the block is Block 162, on 15th Street between California and Welton streets. It's the structure that looks like it's coming unzipped at the top, where the curtain walls are theatrically canted out; this flourish gives the tower a distinctive profile that's visible for miles. Closer up, the detailing perfectly integrates with the clean yet complex overall form of the building. The tower is thirty stories, with a podium that houses retail and lobby space on the ground floor, then nine levels of parking before the partly open-air Sky Terrace. From there on, the tower is all office space — and thanks to a remarkable feat of engineering, none of these office floors have internal columns. Block 162 was designed by Gensler, an internationally renowned architectural firm, with Raffael Scasserra serving as design director, overseeing a large team. Despite its extremely prosaic name, Block 162 is downright poetic. 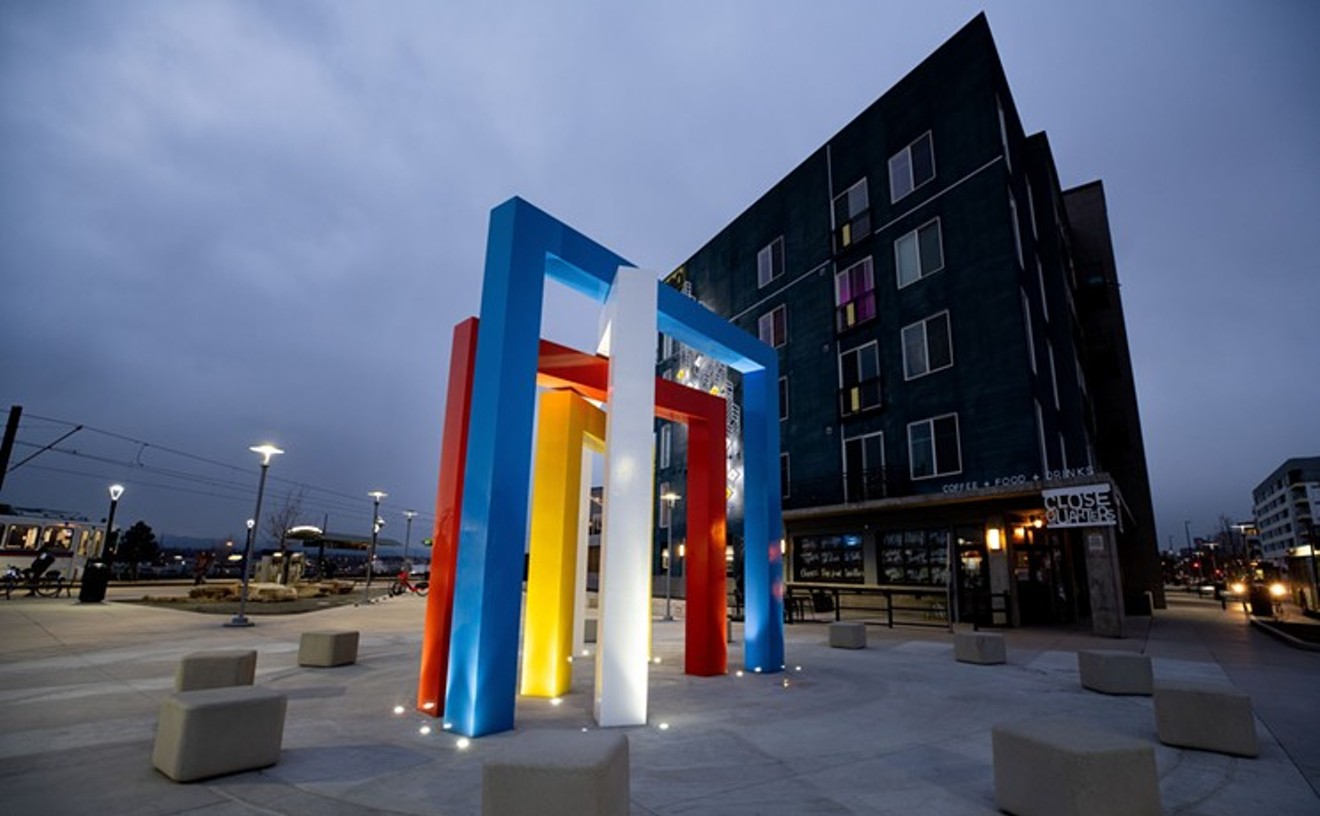 Bauhaus master Herbert Bayer arrived in Aspen in the 1940s, after having fled the Nazis in Europe. Several of his works made their way down to Denver, most significantly "Articulated Wall," an 85-foot-tall stack of yellow bars in the Denver Design Center completed in 1986, the year after Bayer died. A few years ago, a repaint of the stack brought together Dan Cohen from D4 Urban, which owns the center, and Bayer's step-grandchild, Koko Bayer. Koko had uncovered models for hundreds of never-built Bayer sculptures, and Cohen came up with the idea of commissioning some of them for D4's Broadway Park neighborhood. And that's how the fabulous new posthumous Bayer, "Four Chromatic Gates," wound up being erected at the Alameda RTD light rail station. The piece, based on a 1982 maquette from the Kirkland Museum of Fine & Decorative Art, comprises simple shapes evoking the uprights and lintel of a door frame; nested together are four of these painted steel "gates," with the lintels overlapping above but never touching one another. The sleek minimalism and basic colors employed both hark back to Bayer's Bauhaus beginnings, yet somehow his aesthetic still looks contemporary, even decades after his death.

Ann Sabbah and Nancy Larned took a chance last year by going ahead with the first Denver Fringe Festival, believing that local theater-goers were ready for the concept's infinite possibilities and challenging interactivity. They were pleased enough with the results to bring it back this June for a second round, with a mix of virtual and live walkabout programming in RiNo. Denver's not a cowtown anymore! The 2021 schedule and ticket sales will drop in May, with popular Denver groups like Rainbow Militia, Frequent Flyers and Theatre Artibus already on the docket. 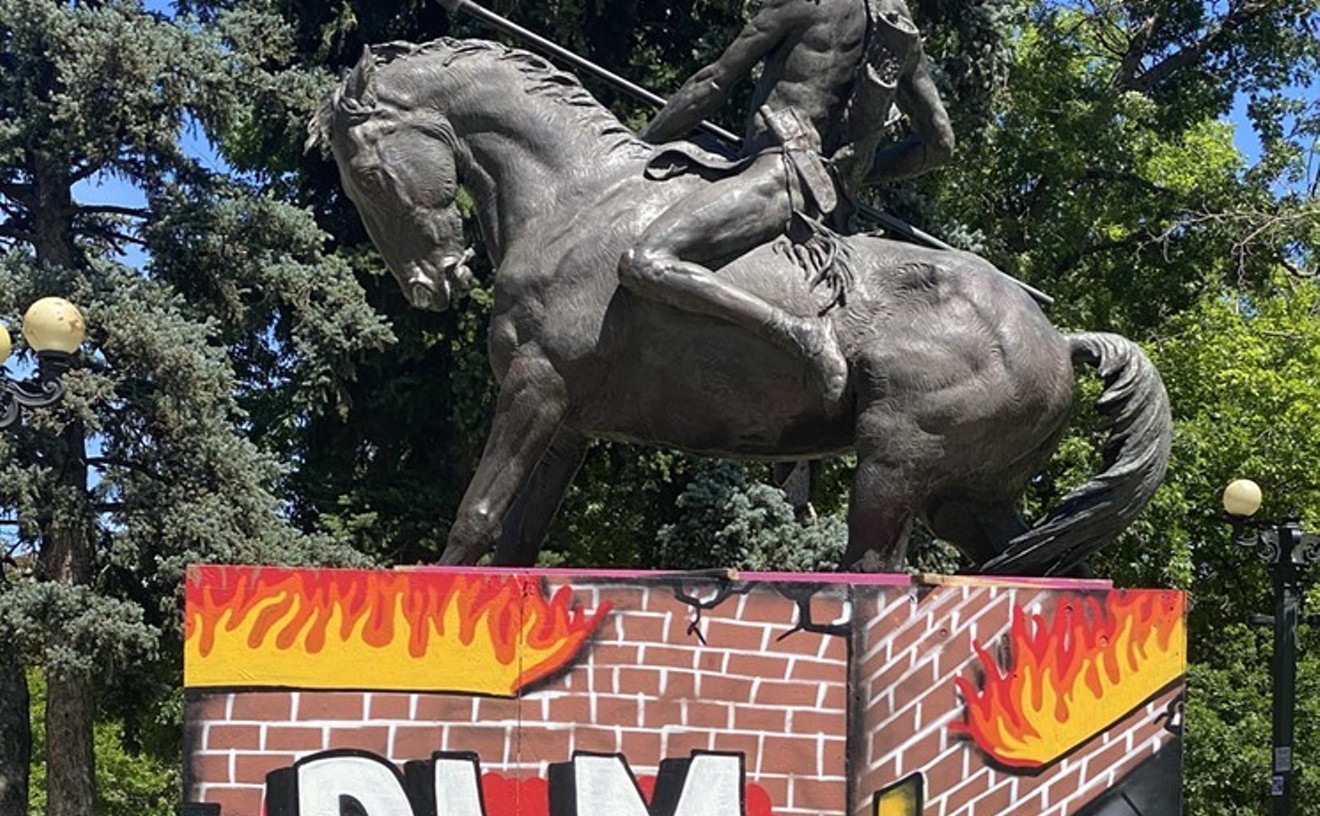 Robert Gray (aka Rob the Art Museum) and Annie Phillips of IRL Art (a Denver group providing artists with opportunities and exposure) had to hustle when they teamed up to create the Black Love Mural Festival amid protests over the George Floyd murder by police in Minneapolis, but last summer's event featuring an all-Black muralist group in Civic Center Park turned out beautifully, prettying up Denver's most central park and sending a strong social justice message to the public. The free fest returns this year, again in Floyd's memory, when an expanded number of artists start working on May 30. 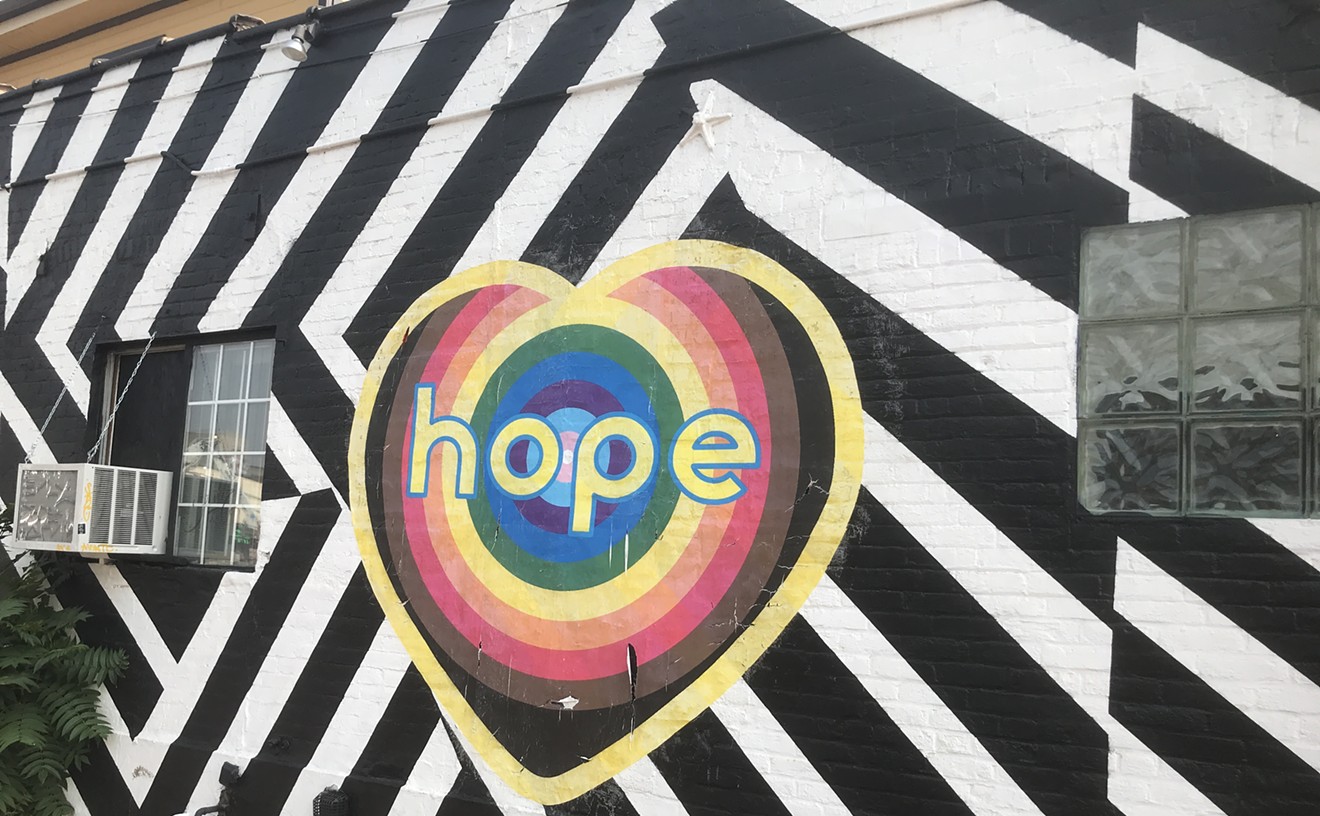 True, 2020 won't be remembered as a year with a lot of hope. But if you've been in Denver for over twelve months, you saw plenty of artist Koko Bayer's hope hearts wheat-pasted all around town. The paper hearts, printed in concentric lines with the word "hope" or "esperanza" in the center, started popping up on businesses, at street art festivals, and even on some apartment buildings in April 2020, and they haven't stopped going up since. The entire effort, dubbed Project Spread Hope, was funded through Bayer's generosity and occasional donations; it's been a constant source of positivity in a year that has been anything but. And even as some of the earlier hope hearts fade, new pieces are surfacing all the time. 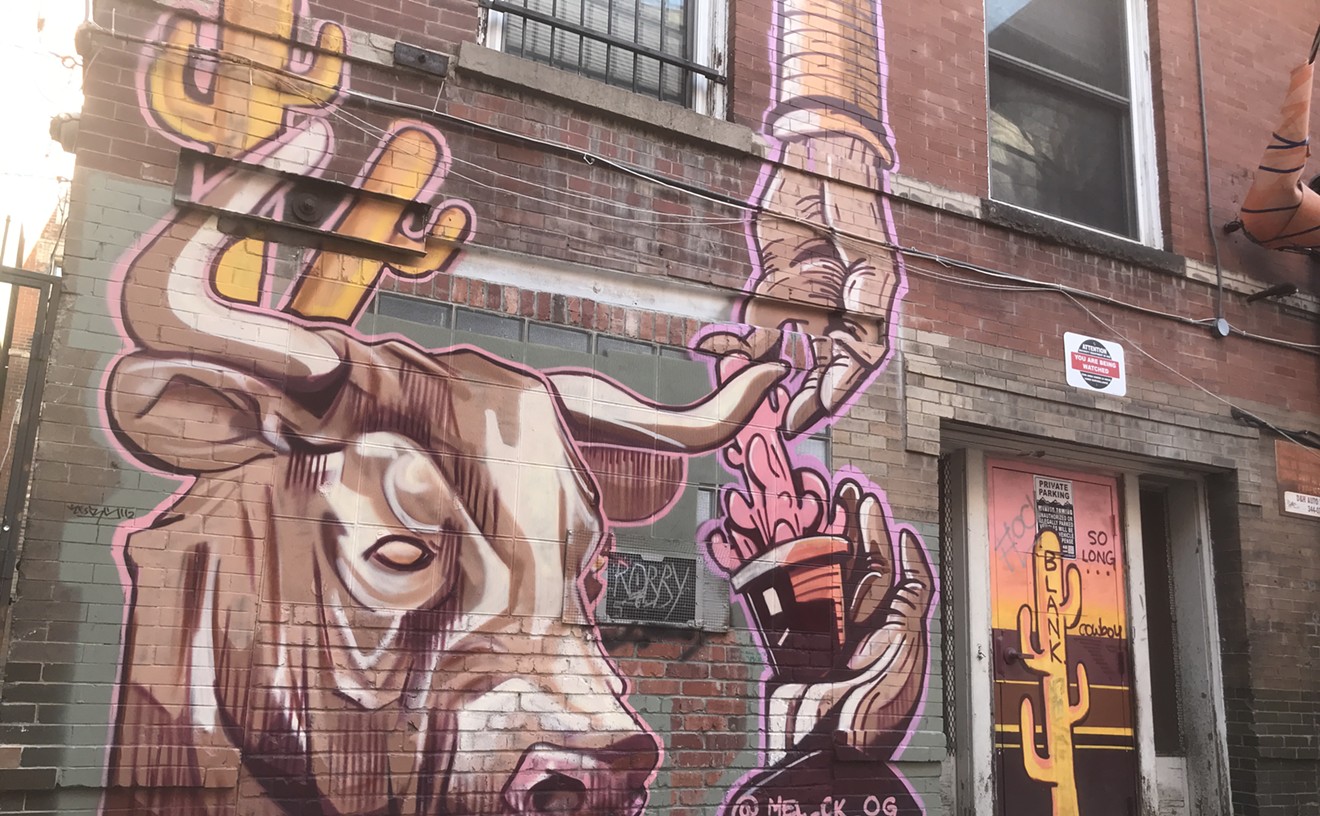 For the past two years, ColorCon has brought some of Denver's finest street artists to paint in the alleys of the Golden Triangle neighborhood. The 2020 edition of the festival, which took place in August, included the work of Moe Gram, Olive Moya, A.L. Grime, We Were Wild, Anna Charney and others, who turned a once dull alley behind the 1100 block of Broadway into a spectacular temple of Denver street art. While the Golden Triangle isn't the first neighborhood that comes to mind when thinking about Denver muralism, this festival has spread the color beyond RiNo and created a must-see spot for new work. 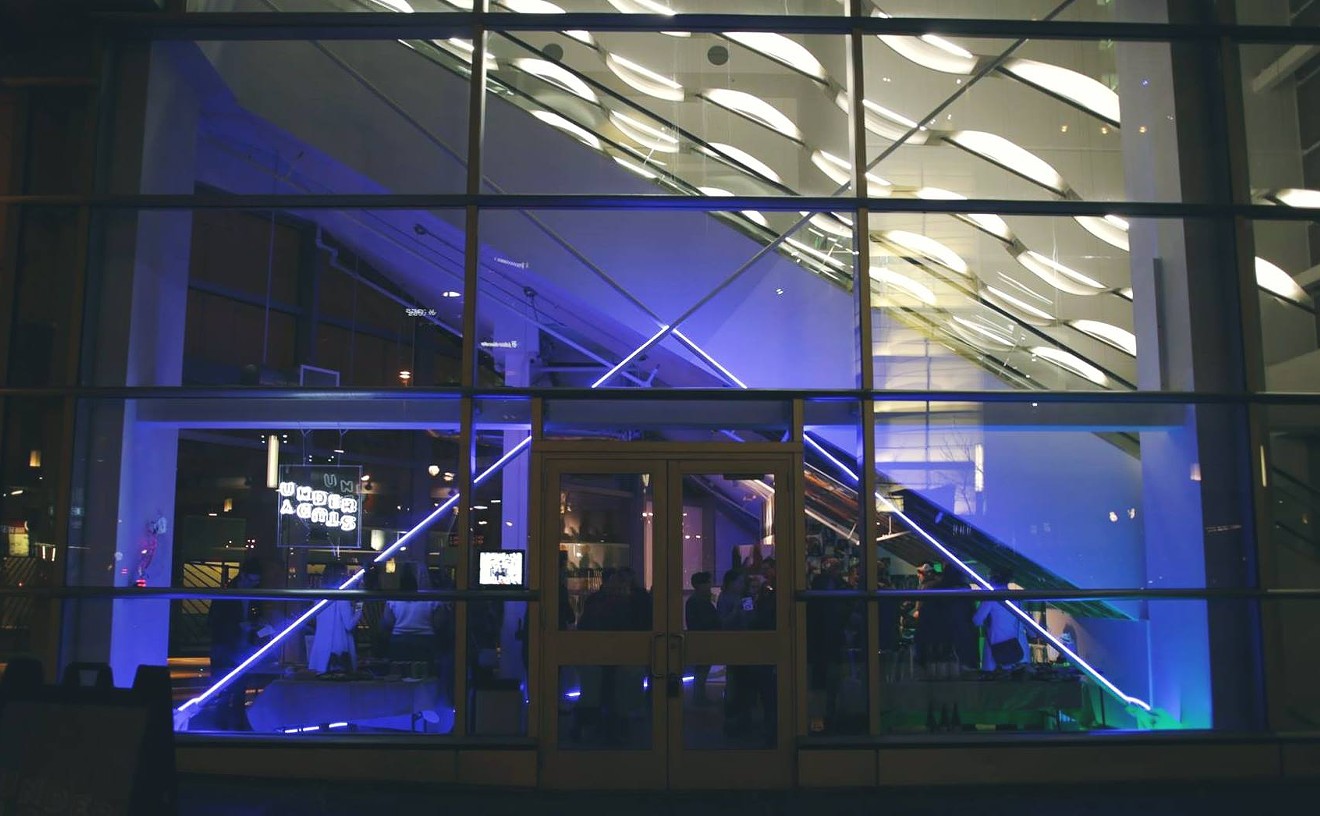 If you're yearning for a hit of experimental art, take a trip to the Colorado Convention Center, where Understudy, the Denver Theatre District's 700-square-foot arts incubator, has set up shop under a stairwell. There you'll find regularly rotating exhibitions showcasing collaborations between people working in various nooks and crannies of the city's cultural scene, from musicians and photographers to performance artists, collectives and educators. Because the work is not commercial, it's often more interesting than the typical offerings at galleries, and the space's exhibits are entirely free.