Undoubtedly, you've seen them -- glazed-eyed zombies wandering the bath-fixtures aisles at Home Depot or walking stiffly, loaded down with catalogues on "tile row," hoping for a miracle. Forget it, home renovators -- cast your fates to the wind. Enter the high-end idea center at the Bath & Kitchen Design Center, which shows off anything from sleek, minimal modern toilets to hand-painted porcelain sinks befitting the finest lady's boudoir, but walk on by: Head straight to the Mickey Mouse line by Kohler, featuring the iconic rodent's smiling face and/or silhouette on sinks, tiles and fixtures. Walt Disney must be turning over in his bathtub.

Perhaps there's something that interests you in the amused, ironic Czech sensibility, and you want to track it in film, from Jiri Menzel's 1966 Closely Watched Trains through Jan Svankmajer's surreal Alice (1988) and Faust (1994) and culminating in 1996's Oscar-winning Kolya, by Jan Sverak. You could go further and rent all of expatriot Milos Forman's movies to see how Central European ways of thought refract through an American lens. Maybe you're nostalgic for those old Alec Guinness movies from England, or you missed such TV shows as Prime Suspect, Cracker and A Touch of Evil and want to get caught up. You may be working on a term paper about the history of the American musical. You may have a new flame who dotes on Hitchcock, Peckinpah and Mazursky. Or maybe you just want the latest and best from Hollywood. Chances are you'll find what you want at Video Station, where over 50,000 titles are available for checkout, making the place one of the five or six best-stocked video stores in the nation. The staff is quirky, friendly and knowledgeable without being condescending. Since the store is locally owned, there's no corporate presence to put a damper on things or dictate what movies can and can't be on the shelves. 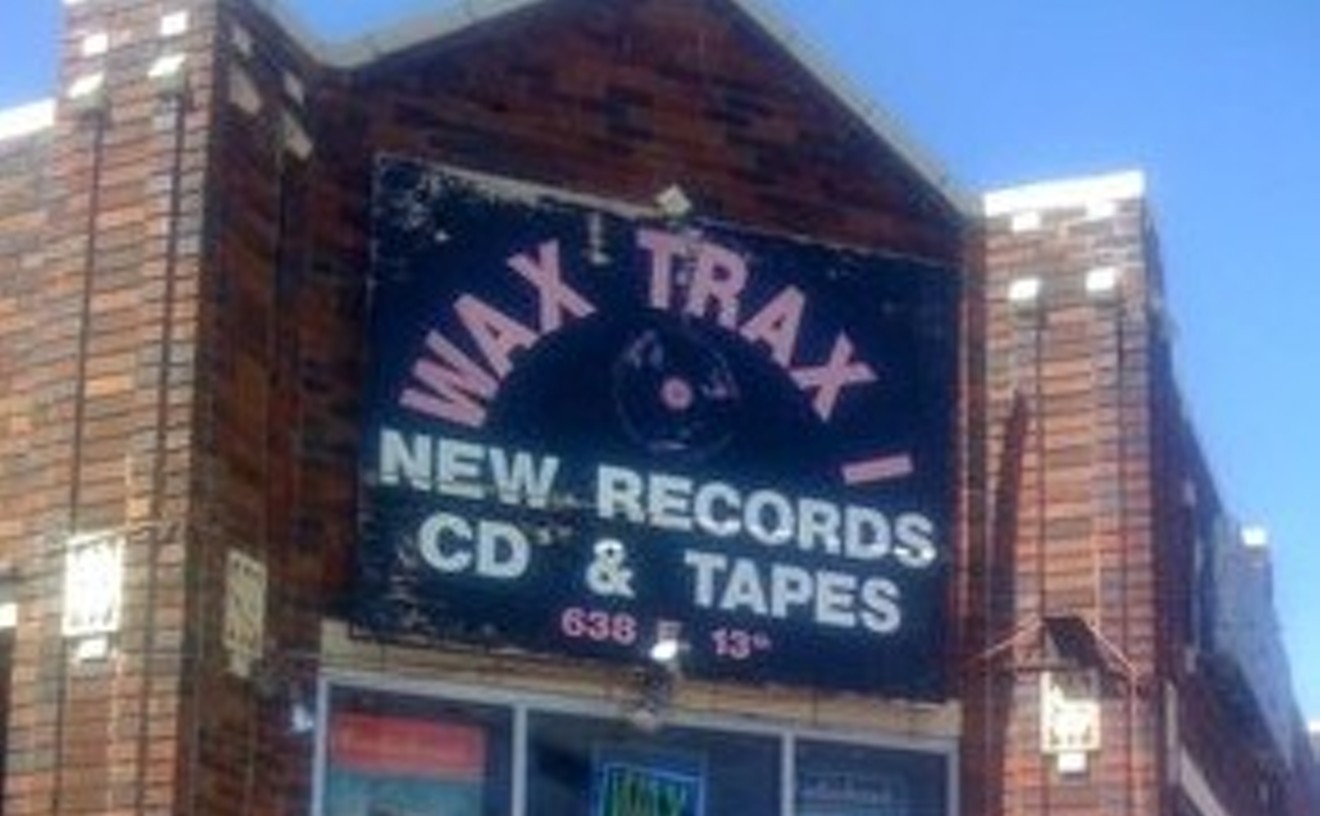 Late last year, this Denver tradition celebrated its 21st year under current ownership -- but it came of age long ago. Wax Trax continues to offer the finest mix of best-sellers and hard-to-find independent or import obscurities of any business of its kind. As an added bonus, stores featuring used recordings, vinyl and videos are mere steps away. Why not stop by today and buy the place a drink? 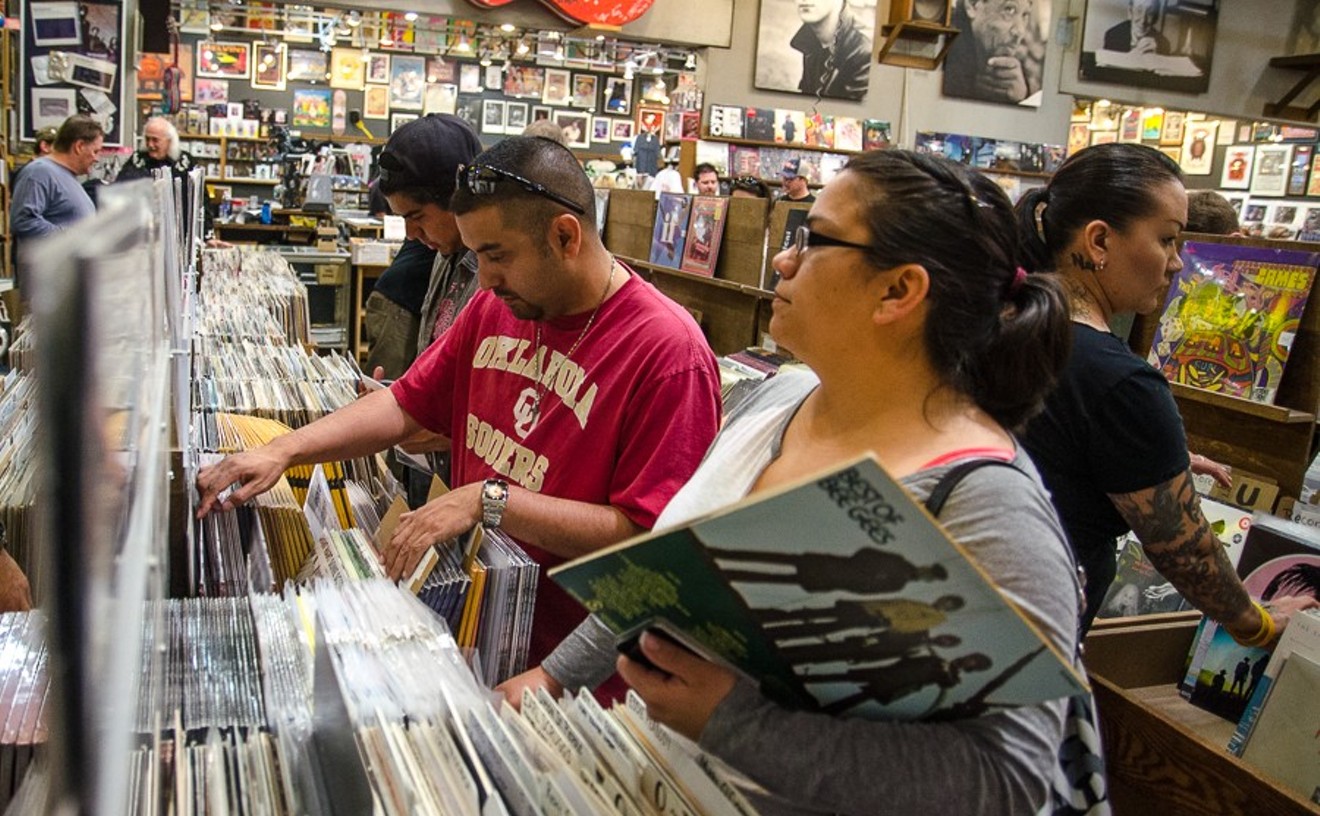 Ken Hamblin III
Sure, there's a great selection of used discs and vinyl at Twist & Shout, but what lifts it to the top of the heap is its music-loving atmosphere. The joint's support of the local music scene is well-known, and lately it's been staging loads of in-store appearances by touring acts such as Patti Smith. Just walking through the door will make you a little bit hipper.

Although it's located in Thornton, a community not exactly renowned for its trendiness, this store has a national rep among vinyl aficionados, and for good reason: Platters that may cost big bucks in New York City can often be found at Don's Discs for a fraction of that price. Add to that a sprawling library of seven-inch singles, and you've got a mecca devoted to a format whose time has come and gone -- and come again.

For nineteen years, Jerry's Record Exchange has stocked some of the most obscure folk, classical and jazz selections in town. But a few years ago, when acid jazz peaked its way into the club scene, the store became a target for DJs who were too cheap to buy. Instead of loading up on security bells, whistles and armed guards, though, store owner John Loquidis simply placed a handwritten note above the jazz records: "To the acid-jazz dweeb, I assume, who felt it necessary to steal Lester Young, Clifford Brown, Bird, Armstrong, et al. covers to decorate his equipment or club, you are a disgrace to your profession as you defame the American art form whilst denying others these great works. This stuff ain't mindless dance crap, Jim...If you are just another anal asshole bent on destroying my store, to Hades with you. Cut up old down beats, Jerk." Store general manager Steve Bruner says the sign appeals to the conscience of potential swindlers and has slowed their thieving ways. "A real jazz lover would never steal," he adds.

In their quests to make the world a better place, Mahatma Gandhi promoted peace, Mother Teresa nurtured the impoverished, and Martin Luther King Jr. fought for equality. Following these precedents, one Denver man is making his contribution to humanity by committing to protect his neighbors from parking tickets. Last summer, Phil Gage noticed how often people were getting ticketed for not moving their cars on street-sweeping days, so he decided to take a stand. Gage founded First Call Communications, a service that uses a computer program to notify subscribers the day before a scheduled street sweeping so they can move their cars and avoid a $15 ticket. He began with twelve subscribers, but business has grown tremendously, and he now boasts 600 ticketless customers. People can opt for free service, which means their phone call comes with a sponsor's advertisement, or they can pay $5 a year to get a message without the ad. Gage's ultimate goals: to serve 10,000 residents and to make the world a better place, one street at a time.

The Book Stack, Mary Reed Building on the DU campus

Bookworms are always looking for a new place to gnaw, and the Book Stack, run by DU's Women's Library Association for the benefit of that school's venerable Penrose Library, is a great place to dig in. It's a repository of cheap, cast-off books: hardbacks, paperbacks, children's books, collectibles and more, some of which have already been dog-eared, and others that are just waiting to have their pages ruffled. Open Wednesdays from 9 to noon and Saturdays from 10 to 2, the volunteer-managed store isn't the biggest or snootiest used bookstore around, but it's certainly one of the nicest. 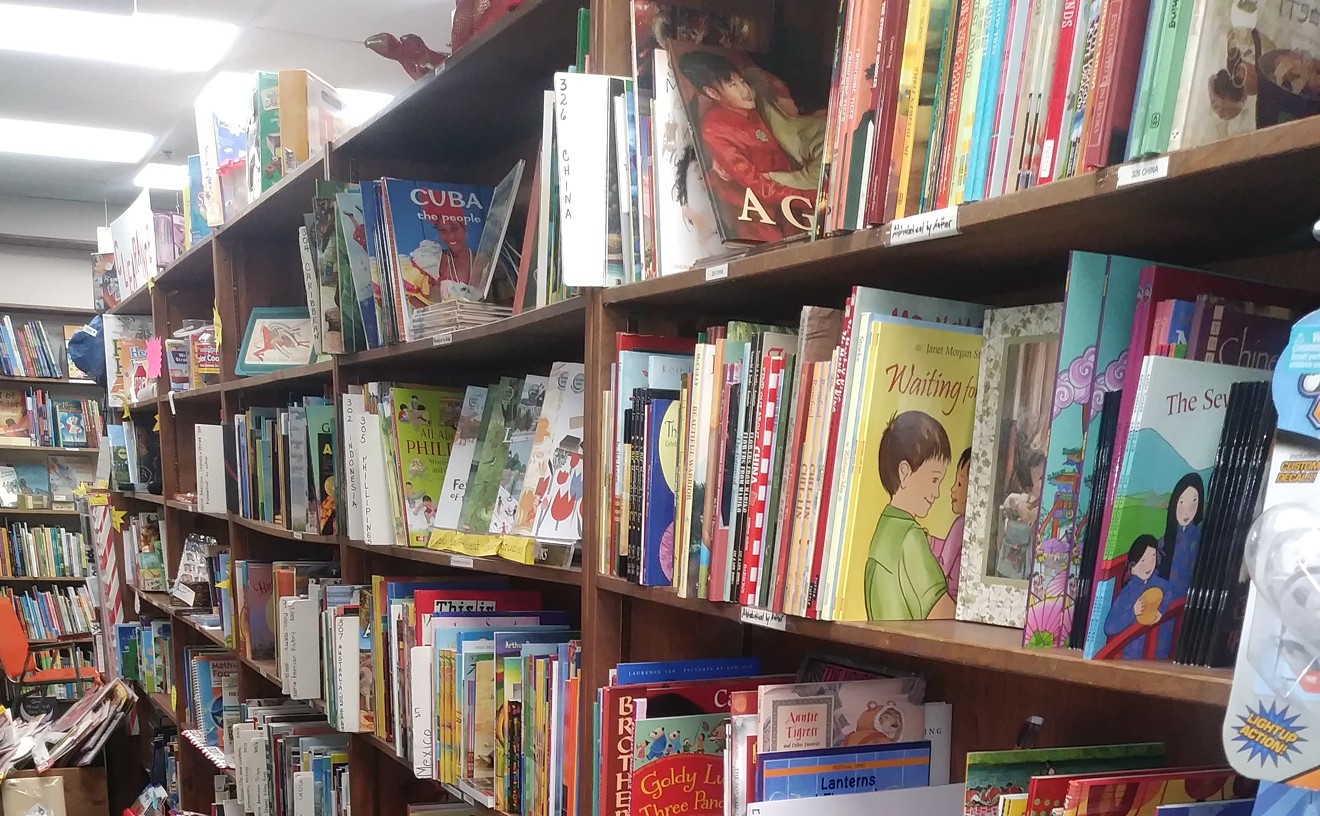 Courtesy of The Bookies
Sue Lubeck's store's been around the block. But now, thankfully, it's actually beginning to wrap itself around the block. A recent expansion will allow Lubeck to better accommodate educators who meet at Bookies without compromising her already crowded retail space, which spills over with wonderful things for and about kids, providing hours of browsing of the most excellent kind. Whether you're looking for Harry Potter or something more obscure, you're more than likely to come across it. But if you don't, Lubeck's steadfast, customer-service-oriented staff will help you get it as quickly as possible. It's the little things that count.

This is a place you either love -- or you just don't get. But be forewarned: Don't come in here without a healthy imagination and a love for the beautiful and unusual. Five Green Boxes changes its whole look with every season, segueing as grandly and organically as nature herself, dressing in new hues and unfolding with unexpected whimsies. But some things remain the same: Central to the gift, gewgaw and home design emporium's raison d'être are such regular features as an in-store design team that whips together one-of-a-kind felt patchwork chairs and other household embellishments, what must be the town's most creative gift-wrapping service, and a fabulous mixture of contemporary craft, antique showpieces, kitsch and flea-market chic. And it all falls under the umbrella of a sky-wide price range that allows you to splurge on a singular, once-in-a-lifetime investment or just take home a little trinket for a pocketful of clinking change.