When you're bowling, sometimes French fries and a slice of frozen pizza will have to do. But at Holiday Lanes, a Lakewood bowling alley and billiard room since the '50s, the in-house Elbow Room offers not only the usual suspects, such as mozzarella sticks and onion rings, but also calzones, patty melts, country skillets and even weekend breakfast. Our favorite part of the lineup, however, is the Tex-Mex lineup. Crispy chiles rellenos, hearty green chile and chimichangas the size of Paul Bunyan's forearm are popular enough to bring in hungry visitors who have no intention of hitting pins. With a menu this deep, there's no way you can strike out. 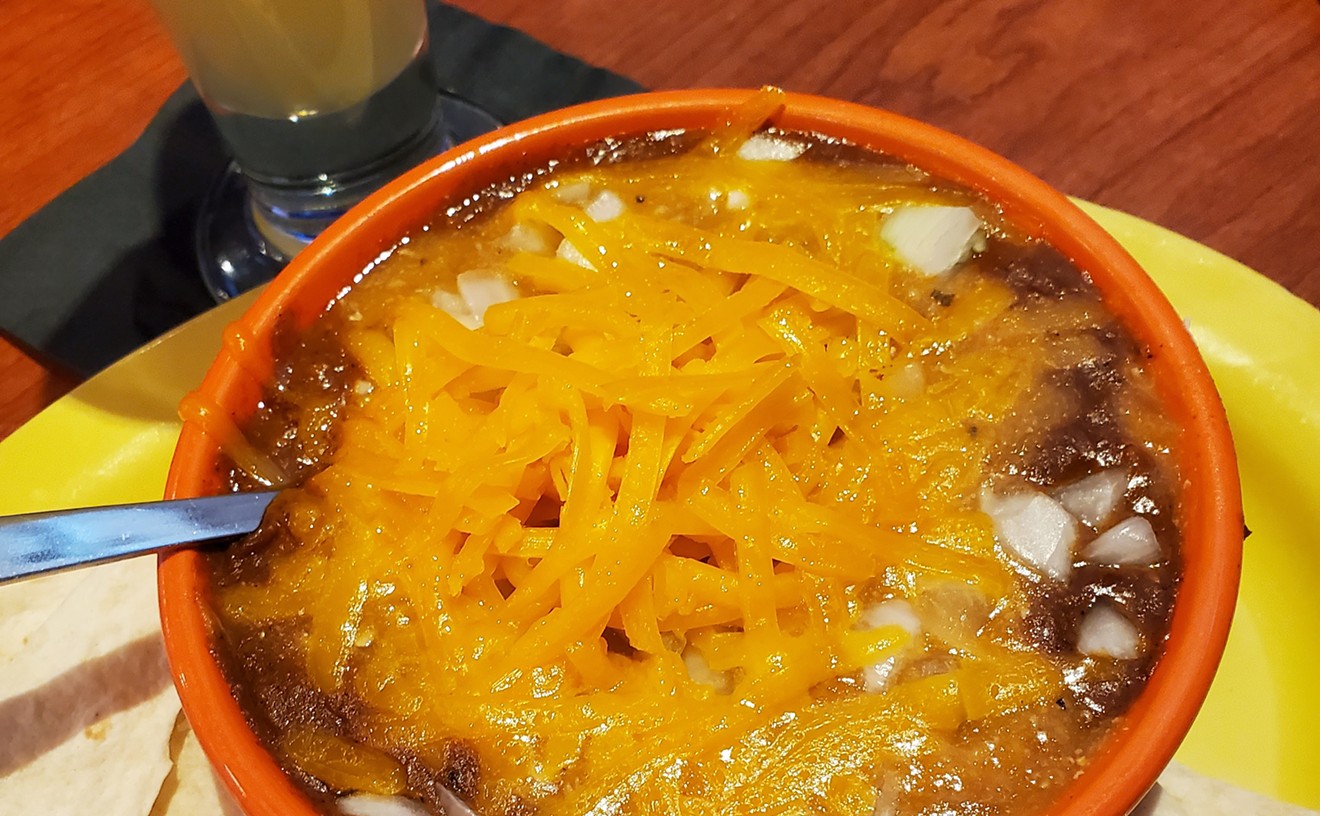 While green chile may rule in Denver, the Tex-Mex chili reigns supreme at Sam's #3, a local chain of diners with a pages-long menu of Greek, American and Mexican staples. The origins of Sam's date back almost a century, and while the original closed over fifty years ago, the Armatas family opened another downtown eatery on the same block in 2003, with additional outposts in Aurora and Glendale. All of them serve the Tex-Mex chili, a combo of Sam's pork green chile and its red, Coney-style chili, ladled in a cup or bowl over pinto beans, topped with cheese and diced onions, and served with a large, warm flour tortilla. Though green chile purists may bemoan this move, one bite and you'll understand the crossover appeal. 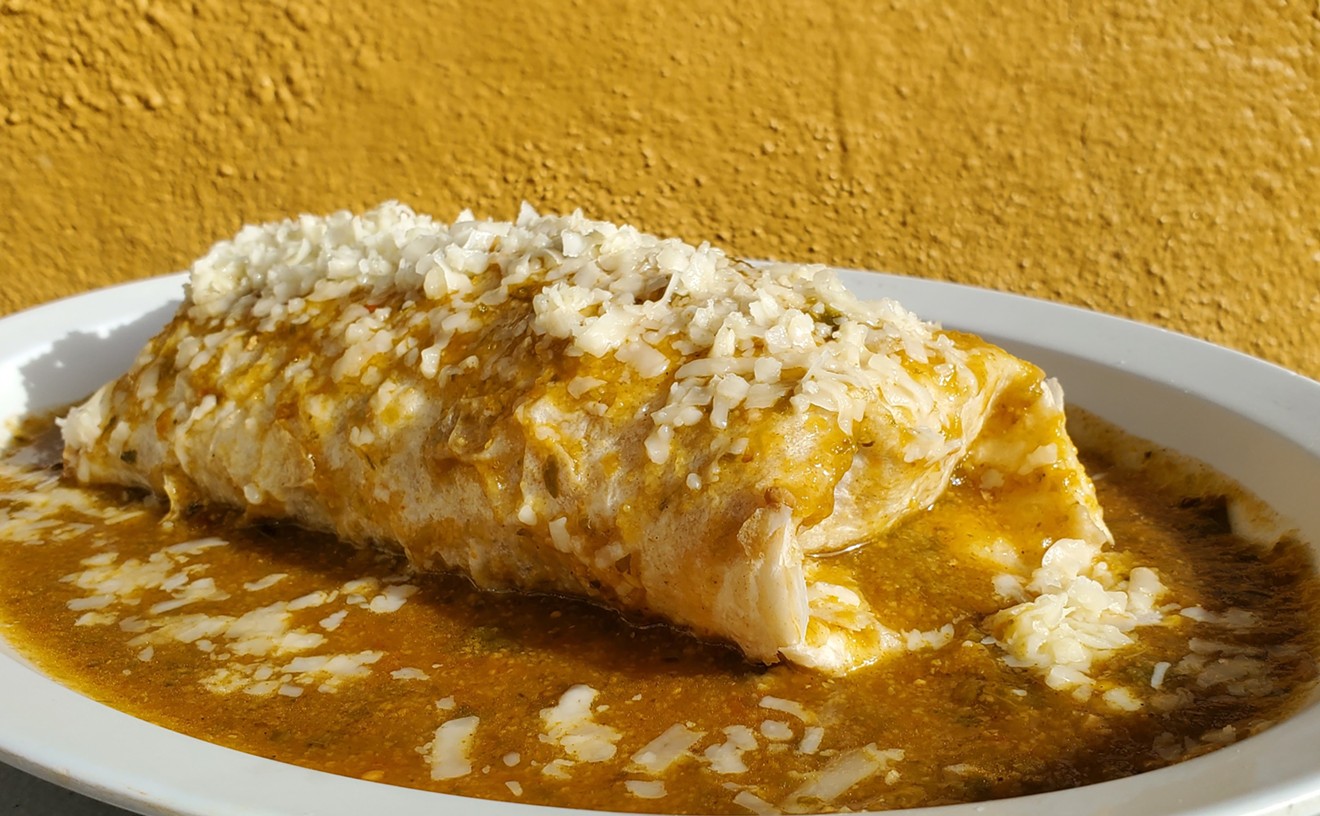 El Taco de Mexico is a beloved institution that has been serving Mexican eats in Denver for 36 years, a fact that was honored in 2020 when it won a James Beard Foundation America's Classics Award. Much of that success can be attributed to its green chile, which stands out in a city saturated with the stuff. Fans flock here from breakfast through dinner for burritos, huevos rancheros and chilaquiles all smothered in the deeply flavored, dark-greenish-brown-hued chile verde. A carnitas burrito blanketed in it is a must, but you should also get a large side order on its own, served up in a Styrofoam cup with or without pork, to stash away for a fix long after your burrito has been devoured.

While the traditional chile relleno is soft, decades ago Denver came up with a unique variation: the egg roll-style relleno. And you'll find the city's best example of that version at La Fiesta, which has perfected it during the sixty years that the Herrera family has run this spot in an old Safeway in Curtis Park. The relleno starts out with an Anaheim pepper stuffed with cheese — not Velveeta, we've been assured — and is then wrapped in a wonton wrapper, dried until the exterior is crisp and the interior molten, and finally smothered with a sense-searing green chile. It's delicious — and unique to this city, according to Gustavo Arellano, author of Taco USA. "In my travels across the U.S., the only place I've found them is in Denver," he says. "Next to the Mexican hamburger, Den-Mex at its finest." Of course, La Fiesta has a pretty good Mexican hamburger, too. Be aware that hours here are limited to weekday lunches, Fridays until 9 p.m., and Saturday evenings, when the restaurant resurrects its old supper/salsa club feel.

For 25 years, Pochitos has been a staple in Sunnyside. Not only does it make tortillas that are served in dozens of Denver eateries, but it's a destination for tamales. At Christmas, there's often a line out the door with people queueing up for this specialty, but you don't have to wait for the holidays to enjoy them. In fact, the smart move is to buy them by the dozen and keep them frozen for a quick and flavorful snack or meal anytime. 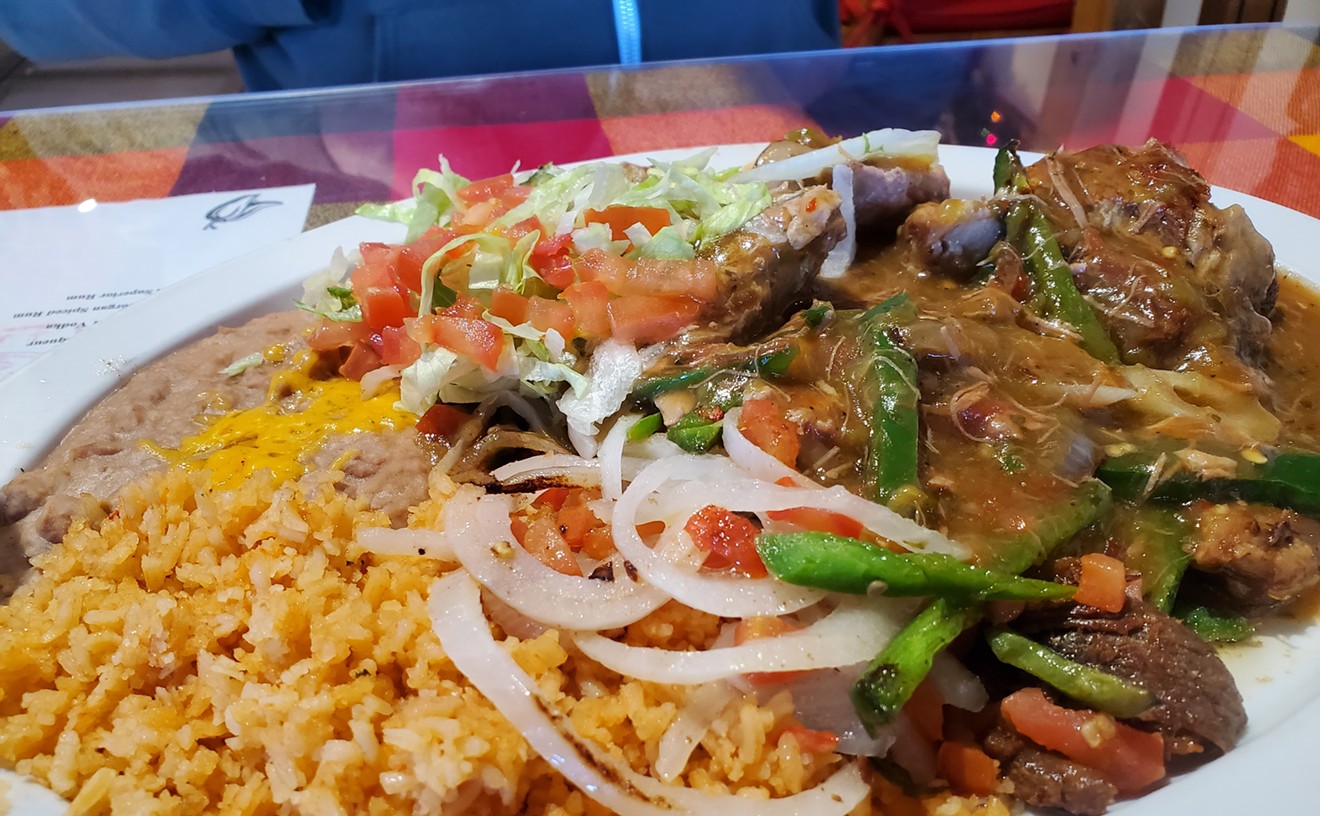 Known to regulars simply as El Tep, this Englewood staple has been serving the neighborhood since 1978. In 2015, the original location closed, with plans to reopen a few blocks farther south. Cravings grew nearly out of control as nearly two years passed before El Tep finally debuted in its new home, in a large space with colorful walls and tables, wooden chairs that bear the restaurant's name and piñatas strung from the ceiling. While it boasts some of the best green chile in town, the true can't-miss option here is the carnitas, served simply on a plate with rice, beans and a tortilla on the side. The slow-cooked pork studded with onions and peppers is crisped before serving, and is an exemplary take on the classic. 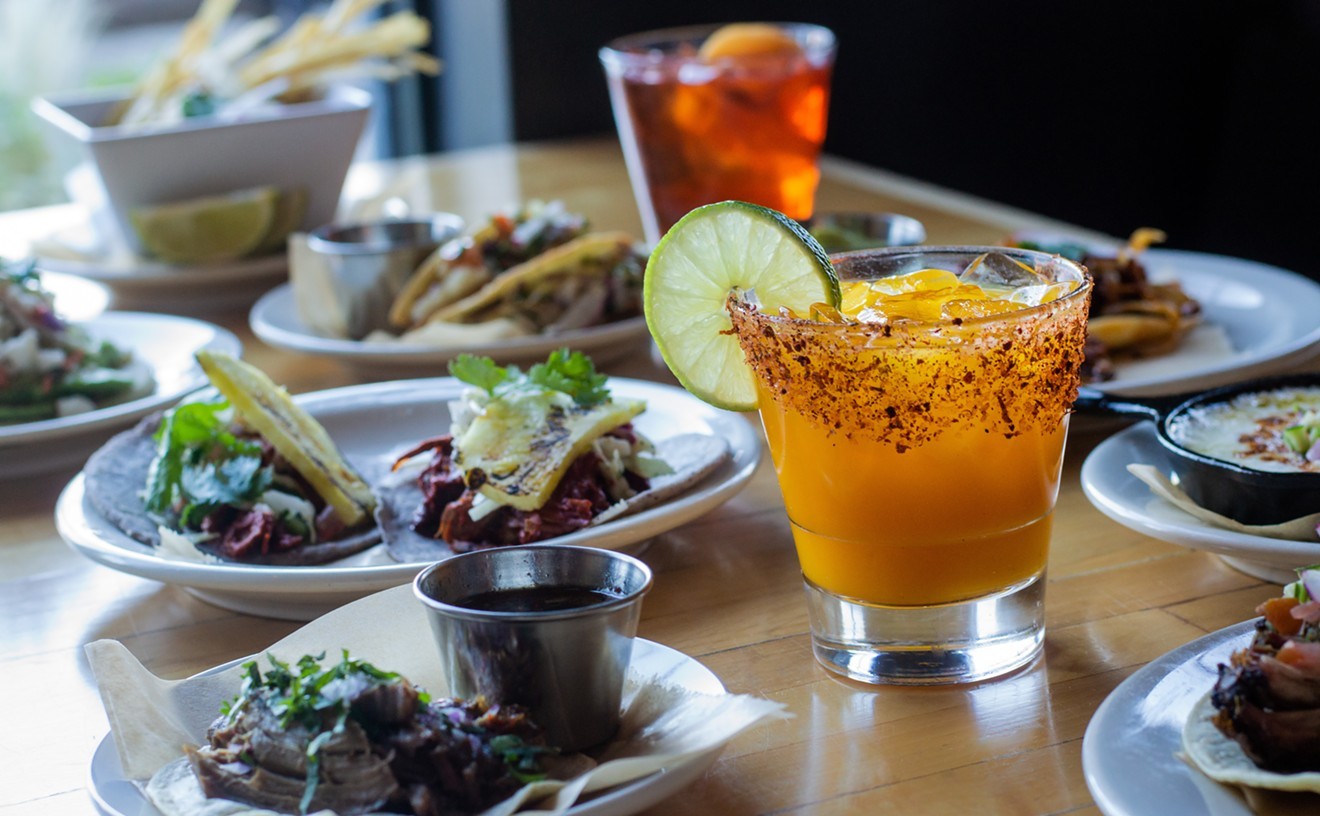 Chef Dana Rodriguez has worked magic again with her latest concept, the Mexican street taco joint Cantina Loca. It's a vibrant spot bursting with complex flavors, all packaged in bite-sized entrees and finger foods. Rodriguez, who brought us Work & Class and Super Mega Bien, opened Cantina Loca not only to deliver charcoal-tempura cactus and housemade chorizo tacos to the neighborhood, but also to showcase her fantastic mezcal and tequila. After all, what goes better with a succulent pork carnitas taco than a dram of smoky mezcal? On the less traditional side, don't pass up the doraditos, which are fried tacos stuffed with cheesy potatoes and lemon cabbage salad, then topped with a spicy avocado sauce.

The original location of La Fogata was opened by Danette Calhoun on East Evans Avenue back in 1990; a second spot was added in the Denver Tech Center in 2004. Both eateries are staples in their neighborhoods, and regulars are greeted warmly by longtime staff — and the house margarita. Made with a secret blend of juices that give it a pink hue and a more mellow lime flavor than most, this marg is everything a great margarita should be: strong, sippable and the perfect pairing for burritos, Mexican hamburgers and chiles rellenos.

Ironton was what this neighborhood along the South Platte was named in the 1800s, and over a century later, Kallyn Peterson and Robbie Adams kept the moniker for their distillery, opening in the space previously owned by Ironton Studios, a founding member of the RiNo Art District. The distillery does Colorado proud both with its strong array of spirits such as vodka, rum, aquavit, gin and whiskey, and the great tasting room where you can try them. With a 10,000-square-foot outdoor space (dog-friendly for canines on leashes) and an art-filled indoor area, it's an ideal place to sit back with a Scandinavian Sex Monkey (barrel-aged aquavit, orange liqueur, turmeric shrub and orange) or a Huntin' Wabbits (rye, carrot juice, apple juice, herbal bitters and sage). And don't just come for the booze and art — though both are reason enough to visit: Ironton Distillery also sells wood-fired pizzas, charcuterie and seasonal salads by Angel's Share Pizza Kitchen.

When co-owner Paul Tamburello (the man behind the Little Man ice cream shops and plenty more) brought the Family Jones to LoHi in 2017, it was with the idea of creating a stunning space where guests could try the distillery's locally made spirits. And those are stunning, too: Master distiller Rob Masters has created Annika Jones vodka, Juniper Jones gin, Mo Jones rum and Atticus Jones rye, but he hasn't stopped there. He's always working on new spirits, such as the recently released Earl Grey Juniper Jones and Ella Jones bourbon, as well as concocting collaborations with breweries and other institutions around town. All of the liquor is made using local purveyors — grain from the Whiskey Sisters, malted grain from Root Shoot Malting and potatoes from Jones Family Organics — and Masters also creates the mixers used in the bar's unique cocktail program. As a result, this is one family you definitely want to join.