The Salt Lick Denver dates to the summer of 2020, when Andrea Hoang, Jason Edelstein and a group of their friends started filming band performances in the soggy basement of a house they were renting. The series of shows, aptly called Songs From the Pond, still broadcasts online and is produced totally in-house. From that start, the group launched a record label, and its five-artist roster — Bear and the Beasts, John Baldwin, mlady, Silver Screen Fantasy and Sponsored Content — often help with and appear in the collective's well-produced music videos, even venturing out into a burn scar for a good visual narrative. This year, the Salt Lick also opened a cozy, affordable recording studio to further nurture Denver's music scene.

Founded by five ex-DIME (Detroit Institute of Music Education) students, Coastless Creatives had a rough start, launching its collective just as the pandemic hit. But these DIY creatives powered through and held their first events last year, including an interactive, immersive arts and music event called Organic Dystopia that included six local musical acts, visual-art displays, creators selling their wares, tarot card readings and nail painting, all in a forest-like setting inspired by Meow Wolf. The collective's goal is to advocate for musicians by creating concerts that save them time and money so they can focus on making music. The Coastless crew curates and promotes each show, and also records video of each act's set for free. Keep an eye out for more Coastless Creatives productions this year. 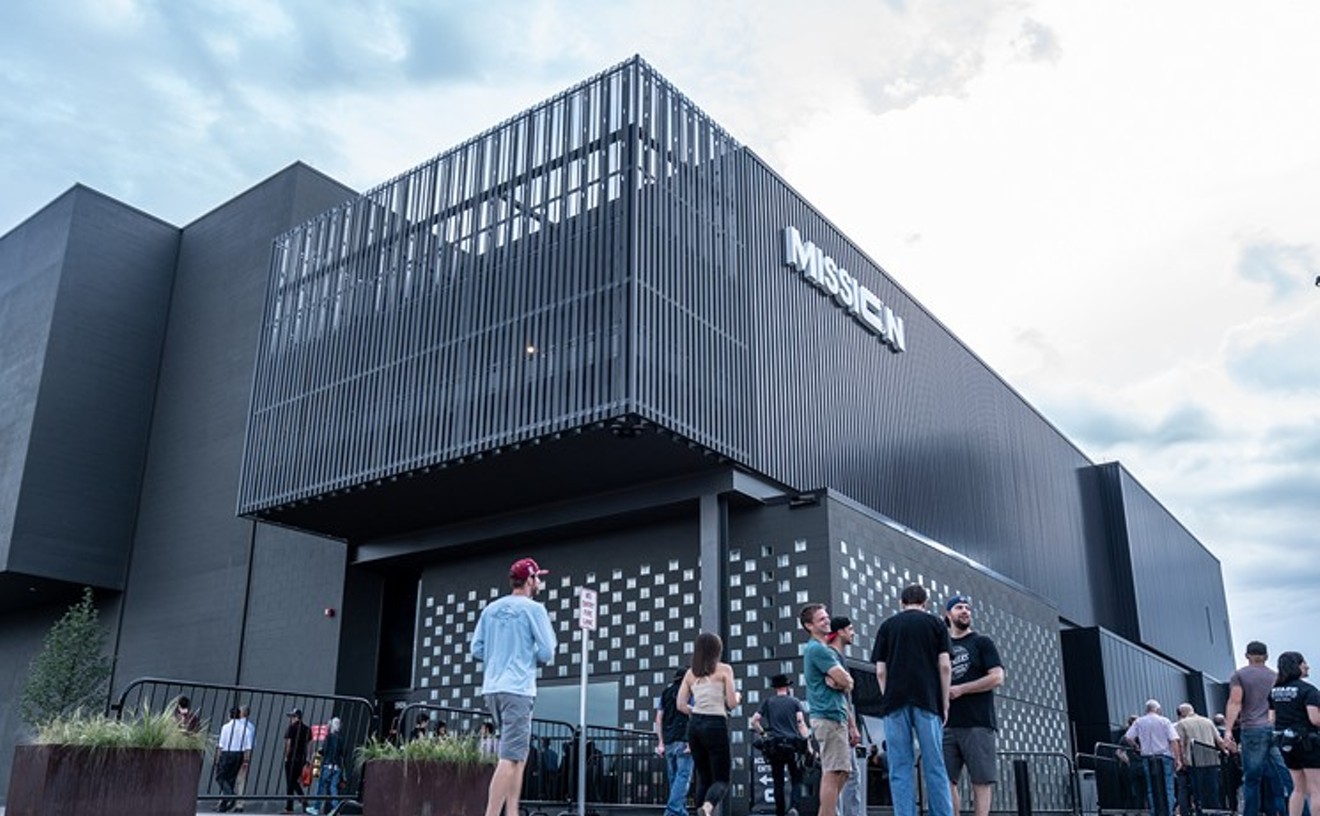 The Mission is essentially an indoor version of Red Rocks, with its wide, step-like seating and phenomenal acoustics. It checks off on everything an indoor venue should have: multiple bars with quick bartenders and a good selection of booze; plentiful bathrooms resulting in fewer lines; a top-notch lighting setup that can suit any band's needs; and a stunner disco ball. Outside, murals abound, showcasing the venue's taste in local art. The Mission has become a Denver staple in the three short years since it opened, with people coming from all over the country to see the national acts that swing through. 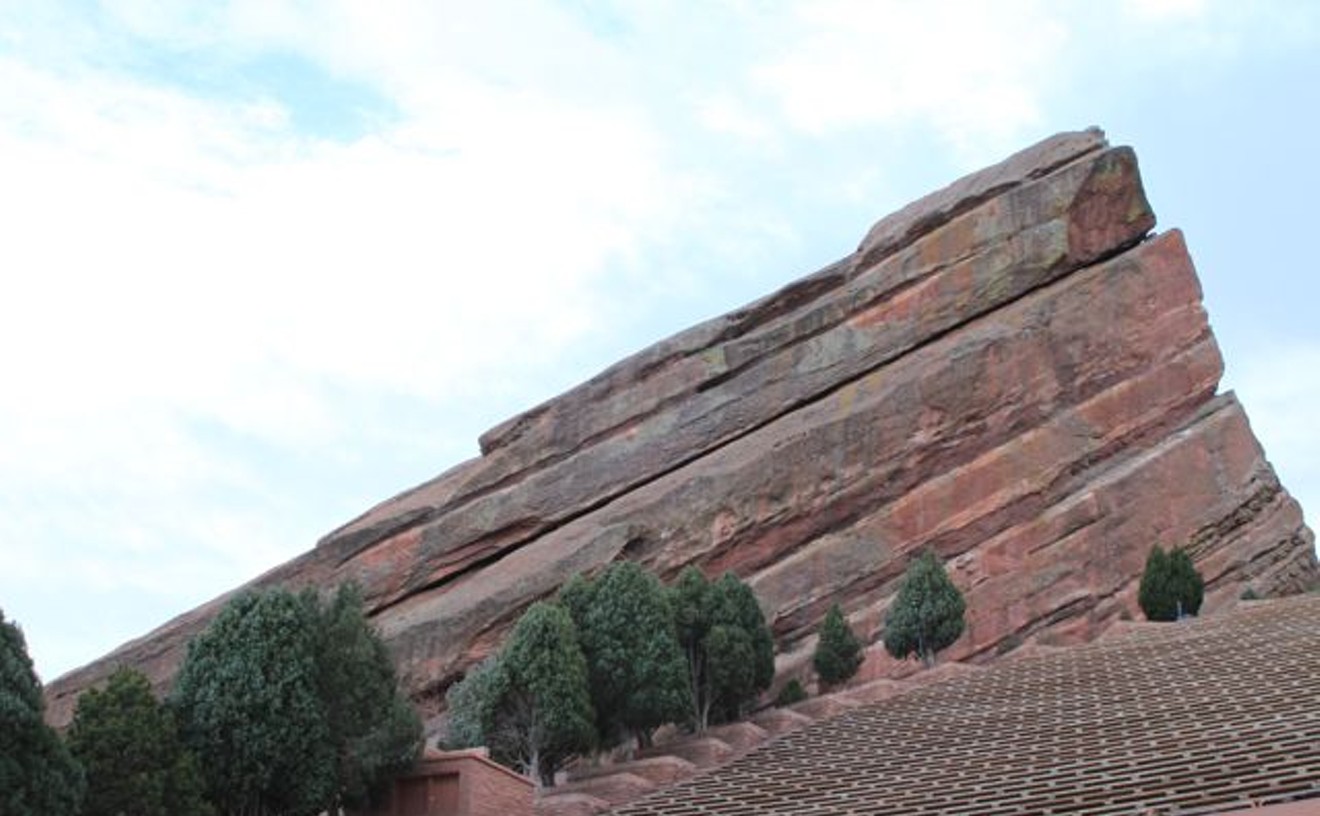 Yes, Red Rocks is a repeat winner, but come on! This venue is on the performance bucket list of almost any band you can think of, for many reasons. Its acoustics and its history are both legendary, and it's got natural beauty to spare. On a clear night, you can see the lights of Denver in the distance from your seat on the steps as you marvel at Ship Rock and Creation Rock to either side of you and get that feeling of being part of something larger than yourself. A Red Rocks show is one of the quintessential moments in the Colorado experience, and this venue deserves every award that could be heaped upon it — including, perhaps, Most Expensive Lemonade Outside a Ballpark.

Cervantes' Masterpiece Ballroom and Other Side

Cervantes' really provides the best of both worlds with its art-splashed outdoor patio and two indoor spaces, the Masterpiece Ballroom and the more intimate Other Side. Bringing in funky acts both local and national, it's a cool place to see a wide variety of bands, especially jam, bluegrass, funk and DJ acts like GRiZ or CloZee. Cervantes' has held its own as an independent venue in Denver for nearly twenty years, and it's become an essential part of the city in that time.

Best Disco Ball at a Venue

When the Mission Ballroom opened in 2019, everyone was impressed with the incredible acoustics, the incredible murals and the incredible disco ball...that failed to spin on opening night. Since then, though, we've been able to see the shimmering orb in all its glory. Emblazoned with a flower-of-life pattern, the colossal disco ball turns as LED lights illuminate it to the beat of the music. It's the cherry on top of an already sweet venue, and the Mission just wouldn't be the same without it.

Best Food at a Venue 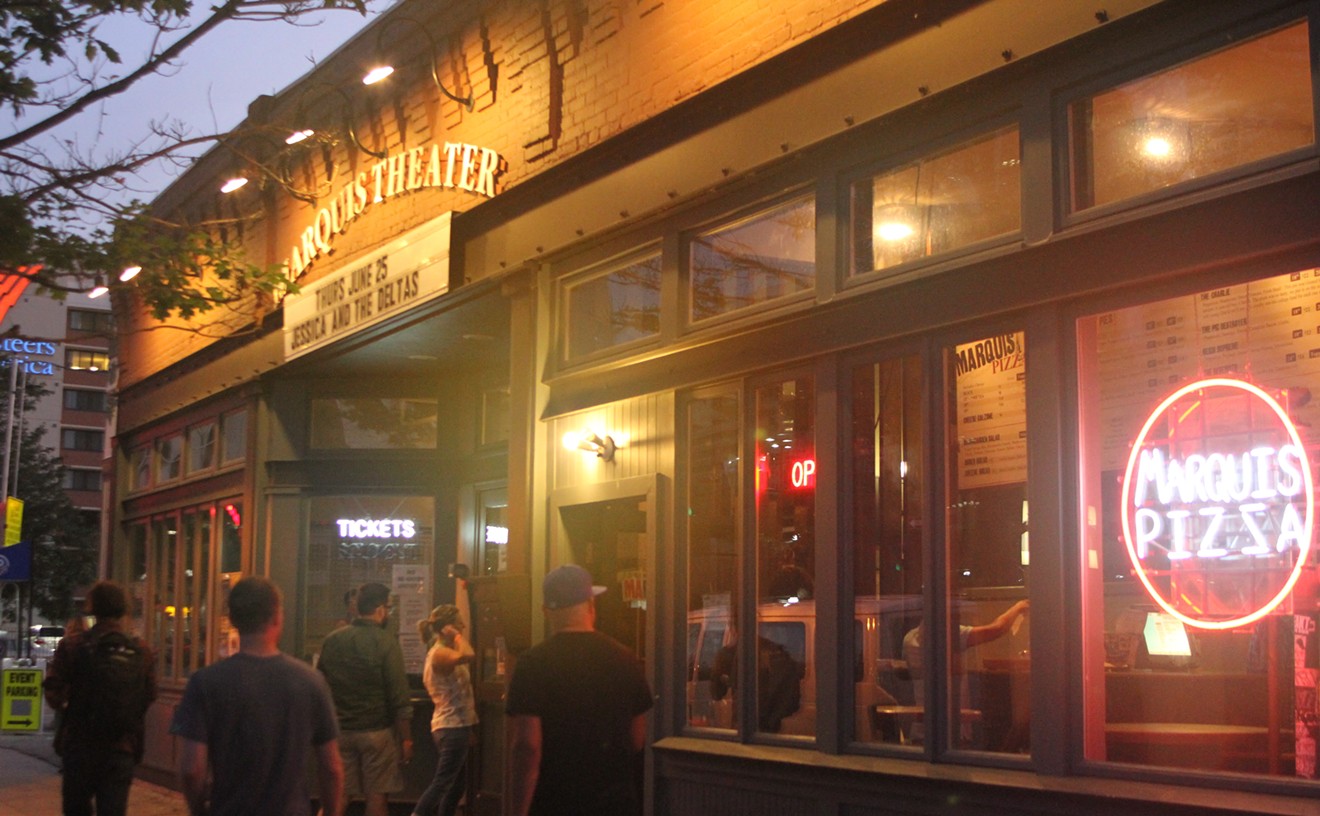 When we stumble out of a show at the Marquis Theater, sweaty, ears still ringing from the music and (probably) a little buzzed, there's only one thing we want: a hot slice. Fortunately, you don't have to look far. The literal hole in the wall that is the Marquis Pizza window is a beacon in the night, calling to all who crave a late-night fix of thin-crust, New York-style pizza. Slices are cheap, tasty and ready fast, and that's exactly what a post- (or even mid-) show bite should be.

Best Drink Deals at a Venue 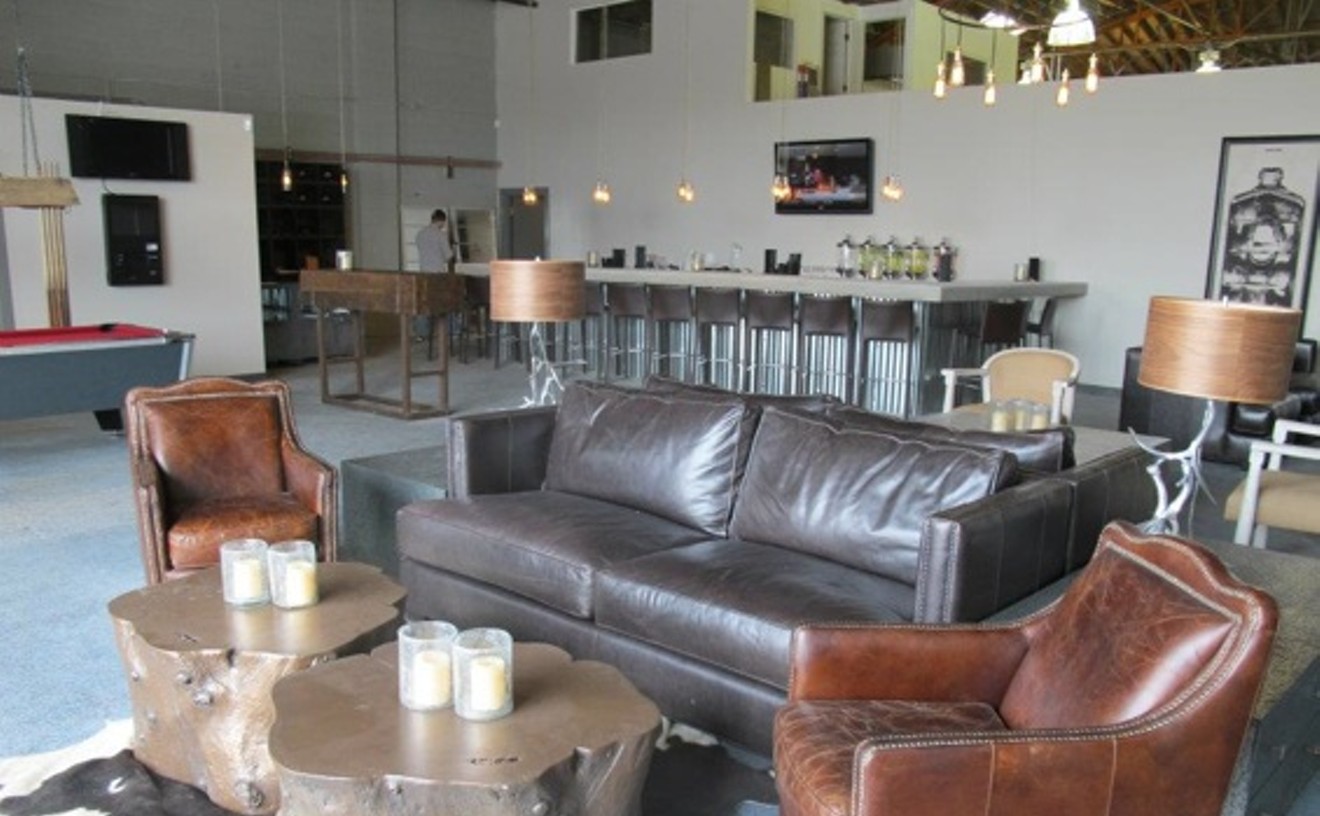 The Mile High Spirits Tasting Room boasts a wide array of acts and fun activities week in and week out; it's also a pretty good place to get drunk (there's even an event here called Blackout Brunch). But you'll definitely want to pay attention to the drinks menu, because while almost all of the cocktails here are $10 a pop, they're all double pours. If you want to listen to music while on a budget, MHS is the move. Just be sure to keep Uber on speed dial.

Best Bathrooms at a Venue

They may be no-frills, but the bathrooms at Ball Arena are clean and, most important, abundant. With a capacity of 20,000, it's essential that the venue — which brings in national touring acts such as Billie Eilish and John Mayer and hosts basketball and hockey games and monster truck rallies — have enough bathrooms, because there's nothing worse than waiting in line for 45 minutes and missing your favorite song. Fortunately, Ball Arena has plenty of them — and they're conveniently located next to other services such as food and drink stations. 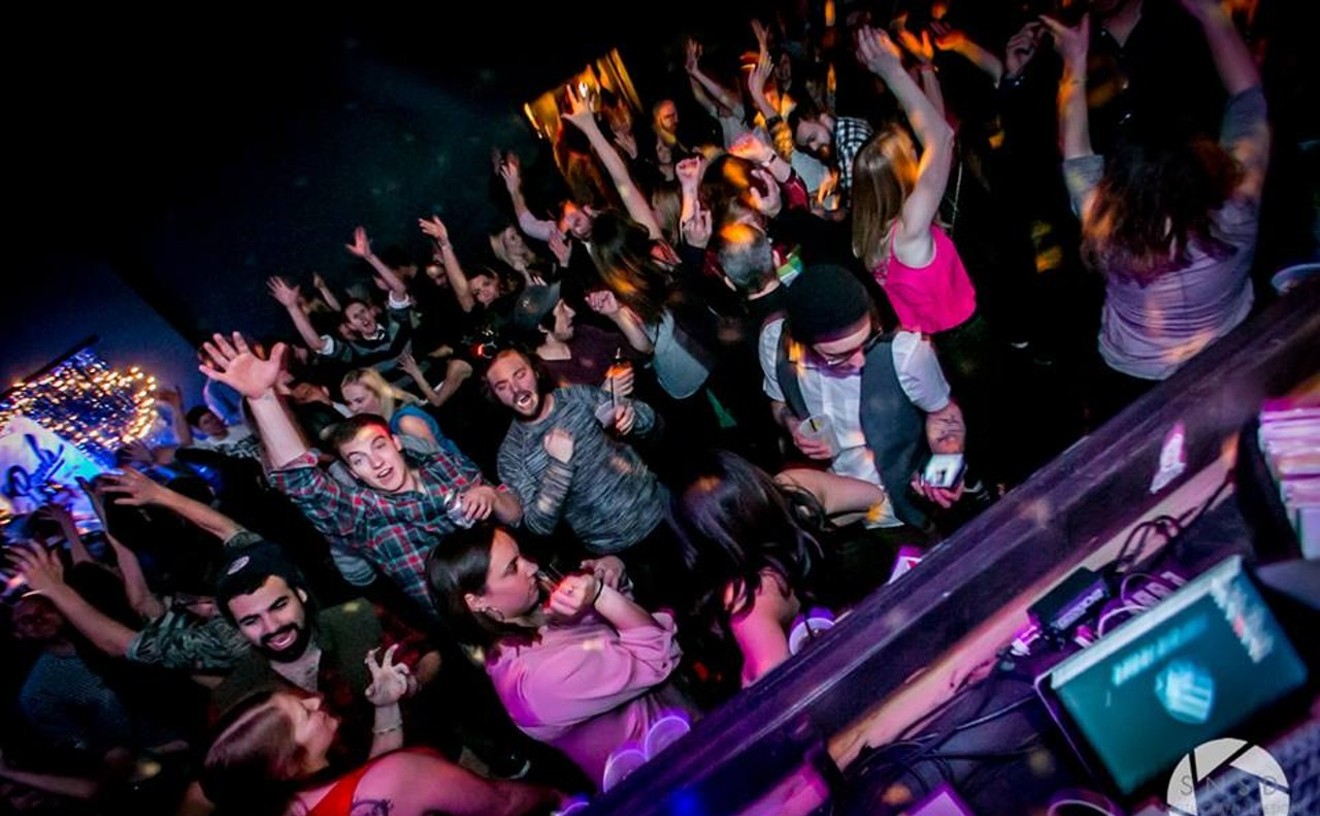 While the name of this venue may leave newcomers to the city confused ("You're going where?"), it has, without a doubt, the best dance floor in any Denver venue. The space is illuminated with cubes of LED lights that bounce from color to color with the music, so you can dance to the beat with the light on your feet. That design makes Your Mom's House a popular spot for flow artists such as hula-hoopers and poi spinners, prop dancers who can match the LEDs of their flow toys with the lights on the ground. A night here is almost always a colorful dance party lush with self-expression.